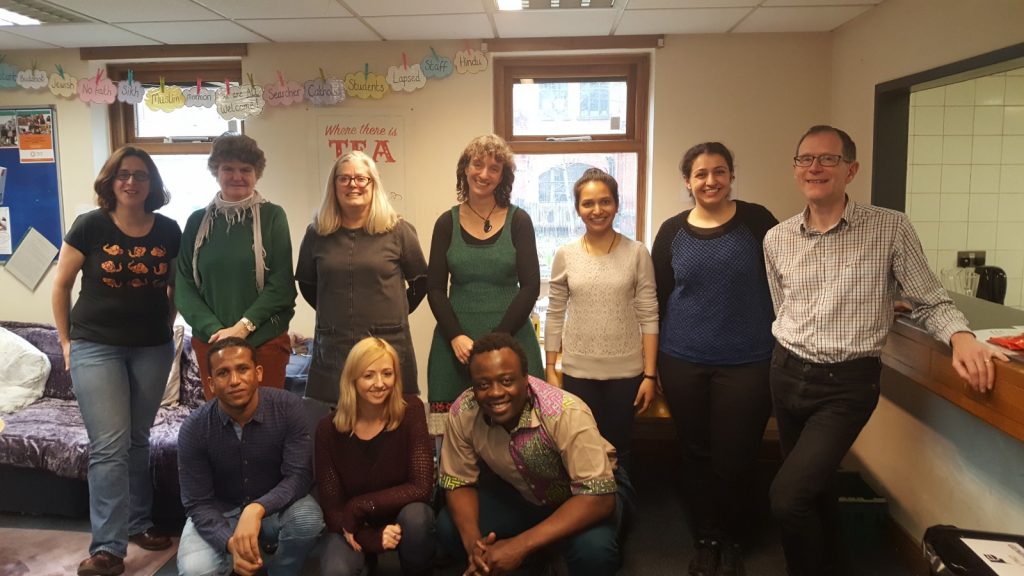 Pinar Aksu works with Maryhill Integration Network as a Human Rights and Advocacy Coordinator in Glasgow, bringing refugee, migrant and local communities together through art, social and educational groups. Her other roles and involvements include: Active Inquiry, World Spirit Theatre, Just Citizens and member of Royal Society of Edinburgh YAS. She has been involved with asylum and refugee rights since a young age and is involved with various campaigns about ending detention to anti-racism. Pinar is also a PhD candidate at University of Glasgow, her topic explores Art and Justice in Migration.

Monish Bhatia is a Lecturer in Criminology at Birkbeck, University of London. He researches and teaches around race, migration controls and criminal justice (more broadly). Monish has published several articles and book chapters, and is the co- editor of numerous books and journal issues including Media, Crime and Racism (Palgrave, 2018), Critical Engagements with Borders, Racisms and State Violence (Critical Criminology, 2020), Migration, Vulnerability and Violence (International Journal for Crime, Justice and Social Democracy, 2020), Borders, Race and Global Mediascapes: Deconstructing Violence in Politics and Representations (From the European South, 2021) and Race, Mental Health and State Violence(Race and Class, 2021).

Tamzin feels personally connected to refugee issues as there have been three stories of persecution and asylum seeking in her family history. She has been working with charities in Northern France since around 2015. Tamzin has worked in HR for over 15 years and joined the management team in 2020 to support Right to Remain in being an exemplar employer.

Liza is a lifelong campaigner for social justice and in actively providing frontline services including volunteering for and chairing a London based HIV charity. With a background in social work she has supported small BAME and refugee organisations with governance and fundraising and was Director of Resources for Autism for 14 years. Now semi-retired she works part-time for 4in10 (London’s child poverty network). Liza has personal experience of detention and navigating the subsequent legal maze to enable release.

Whilst living in London Laura completed a Masters in Human Rights at the London School of Economics and worked with refugees and asylum seekers in the charity sector. Laura then decided to move into the legal sector and qualified as a Solicitor. She currently works for a legal aid firm based in Manchester working in Public and Housing Law where she assists unaccompanied asylum seeking children in age dispute cases and in securing accommodation and support from the local authority, families with no recourse to public funds in accessing housing and support and refugees and asylum seekers in accessing suitable accommodation and support from the Home Office or local authority as appropriate. She is also an active member of voluntary organisations in the area short-term holding facility based at Manchester Airport.

Tom joined the Right to Remain Management Committee as Treasurer in 2020. He is a qualified accountant currently working as Financial Controller for a publicly-owned regeneration corporation in East London, having previously worked in both the public and private sectors.

Catherine has worked at the University of Cambridge’s interdisciplinary research centre, CRASSH, for the last 15 years. She has recently become active with organisations concerned with immigration and asylum in a voluntary capacity. She emigrated to Canada from the UK with her family as a baby but has only recently begun to think of herself as an immigrant.

Tienga was involved in setting up the Cameroon Community Welfare and Development Association (CACOWEDA), and was a trustee of the Notre Dame Refugee Centre from 2003 to 2010. He coordinated the activity of the Cameroon Support Network until 2011, and was very involved with the Strangers Into Citizens Campaigns both in 2007 and 2009. He has also been a Trade Union Rep, and worked as an advisor in welfare rights and health and social care.

Katherine is a retired solicitor and mediator and lives in Glasgow. She is a Local Preacher with the Methodist Church and a member of the Iona Community.

She has been active in work with refugees for some years, having been a Trustee and secretary of the Board of Trustees of a Night Shelter for Destitute Asylum seekers. As well as being on the Management Committee of Right to Remain, she is now on the Iona Community Common Concern Network for Refugees.

Holli has a degree in law and studied to become a barrister. She was called to the Bar of England and Wales in 2011. Holli has worked with asylum seekers and refugees since 2013. She currently works as a Senior Immigration Caseworker at Manuel Bravo Project, a charity providing immigration advice and assistance to asylum seekers and refugees. Holli also works in criminal defence law, as an accredited Police Station Representative. In her spare time, Holli enjoys going to the gym where she is training to competitively bodybuild.

Phill has over ten years experience as an asylum caseworker with Refugee and Migrant Justice, the Immigration Advisory Service and more recently as a caseworker and researcher for the Manuel Bravo Project. Phill is also a final year PhD student in the Department of Anthropology at Goldsmiths, London.

Hyab is a researcher with a Ph.D. in the Realities of Eritrean Refugees in a Carceral Age from the University of Glasgow, where he currently works as a research associate. He has extensive research experience in undertaking fieldwork, interviews, critical evaluation and interpretation, computer-based data analysis and evaluation. Moreover, he possesses strong decolonial and critical thinking skills and brings unique experience and perspective to migration-related policy development and implementation. He is interested in theorising the challenges forced migrants face and the biopolitical b/ordering that led to their challenges and contributing towards a positive change.