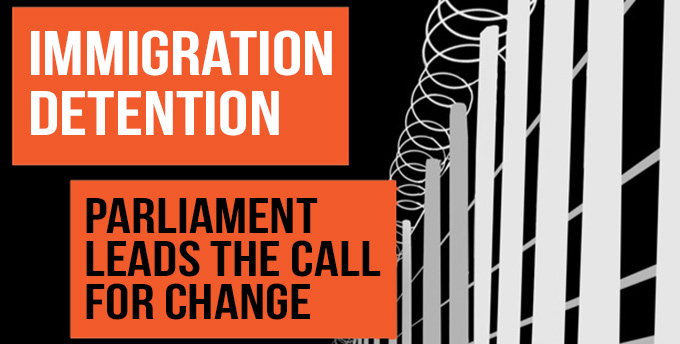 On Monday afternoon, I sat nervously at my desk repeatedly pressing ‘refresh’ on my emails.

Right to Remain is very busy this month – today we will be at the support vigil for Aderonke Apata’s judicial review hearing; we’re working hard to translate into action the statement from the Afghan Minister for Refugees that the UK and others should stop deporting to Afghanistan (particularly as there is a charter flight mass deportation scheduled for 10 March); and we are organising the migrant rights bloc of the Stand Up to Racism march on 21 March in London.  Not to mention the meetings in Newcastle, Glasgow, Manchester and Liverpool lined up in the next two weeks.

Yet it was none of these things that was causing my nervous tic.

The embargoed copy of the cross-party parliamentary inquiry report into detention was due to land in my inbox any moment, ahead of its public release today.  Now, maybe that doesn’t sound like the most anxiety-provoking thing, but it really is big news.  Bear with me.

This is the report from the cross-party inquiry panel, which includes two Ministers in the current government, a former Lord and a former Chief Inspector of Prisons.

This is the report from the inquiry for which Right to Remain co-hosted a group evidence-gathering session (as well as helping individuals submit written evidence to the panel).  I am still struck by just how moving and disturbing that experience was, despite many years of working with and knowing well people who have experienced detention.  I will also forever remember the incredible respect the participants had for each others’ experiences, and voices, everyone making sure that they all got to speak and supporting each other through the painful experience of recalling injustice, hardship and abuse.

Could the report live up to expectations?  The panel had heard from a wealth of experts – the experts-by-experience mentioned above, NGOs working tirelessly to mitigate the damage of detention, medical and mental health professionals, international advisors – and the need for change had been made abundantly clear.  Nearly 200 written submissions were received.

Right to Remain is opposed to all immigration detention… This report progresses the anti-detention movement a long way.

Crucially, this panel believes that little will change by tinkering with the pastoral care or improving the facilities.  We believe the problems that beset our immigration detention estate occur simply because we detain far too many people unnecessarily and for far too long. The current system is expensive, ineffective and unjust.

The detention inquiry was such an important opportunity for parliament to lead the call for fundamental change to the UK’s appalling system of detaining migrants, and they have seized that opportunity.  The report is comprehensive, covering issues including the detained fast-track system, conditions in detention, internet access for people in detention, the detention of migrants in prisons, legal representation in detention, mental health, victims of trafficking and more.

What is most striking about the report, however, is its emphasis on how the whole system must change.

Sarah Teather, the Chair of the inquiry, points out that the recommendations of the report “require a very radical shift in current thinking … It may well surprise many people that this group of parliamentarians have made such radical recommendations on a difficult topic, so close to an election”.

Each section of the report contains specific recommendations, which are worth reading in full as they include achievable, concrete change that could be realised relatively quickly.  For example, lifting the restrictions on using social media in detention; and reverting to the pre-2010 policy of only detaining individuals with mental health conditions in exceptional circumstances.

Of most significance, though, are the reports overarching recommendations:

Providing the path to change

This last recommendation is key.  Here, the inquiry panel has provided the Government with the path to change.  If alternatives to detention are implemented – as expert witnesses strongly recommended in their evidence to the inquiry panel – then it follows that less people will be detained, for less time.  These alternatives cannot be crow-barred into the end of the process, as Detention Action and others have pointed out – for them to work, by the Government’s own criteria, people need to feel like they have had a fair experience of the asylum and immigration system, that they have been listened to, and that their case has been considered properly.

It is also heartening to see that the report considers the risk in implementing a time-limit, that the Home Office may begin detaining people for this maximum period by default.  The report suggests reasonable measures that can be implemented to ensure that this isn’t the case, and that the introduction of a time-limit is a positive change for those seeking the right to remain in the UK.

This route to reform should not be overlooked.  By outlining the case for alternatives for detention, and indicating the process-change that may be required for the report’s recommendations to take effect, the inquiry panel progresses the anti-detention movement a long way.    A culture-change in Government (which would feed down to the Home Office) is essential to seeing the end of immigration detention become a reality, even though we may be some way off from this ultimate goal.

3 comments on “Cross-party parliamentary inquiry into detention: “we cannot go on as we are””