Last week the Home Office announced that it will close Camspfield immigration detention centre in May 2019.

At the end of this month, to mark the 25th anniversary of the opening of Campsfield, the Close Campsfield campaign shall be organising a big demo at Campsfield on Saturday the 24th (tickets here), but also a special event at 7pm on Thursday 22nd November in Oxford Town Hall, where people who have been involved inside and outside Campsfield in resisting detention will tell their stories and talk about where next. 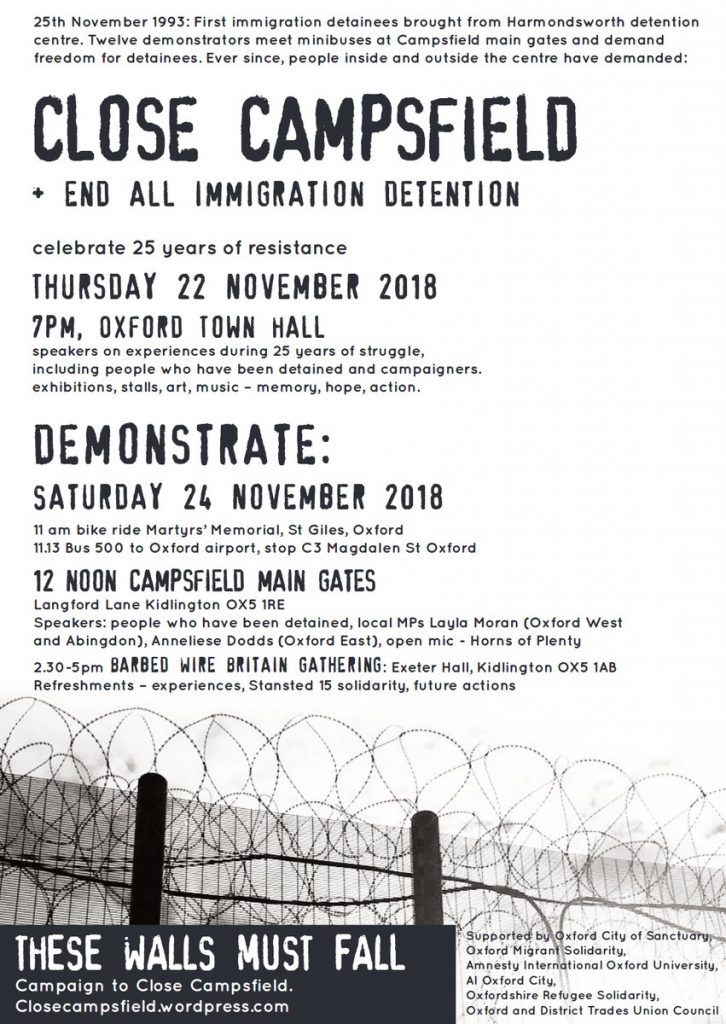 Campsfield House – previously a young offenders’ institute – opened as a detention centre in 1993.

In 1994 the ‘Campaign to Close Campsfield’ was launched and monthly demonstrations outside of the detention centre began.

The opening of Campsfield was part of a shift in Britain from detention as an exception, something temporary to be resorted to in times of major crisis, to detention as an administrative measure and mechanism underpinning Britain’s refugee and asylum regime

In 2014-15, a local and national campaign successfully prevented the proposed expansion of Campsfield House detention centre, which would have doubled its detention capacity.

There are multiple campaigns run by civil society groups, human rights organisations and political lobbying groups which challenge the use of immigration detention.

You can read statements on the announcement from Right to Remain, Freed Voices, Detention Action, the Detention Forum and the Close Campsfield campaign here:

On the closure of Campsfield Immigration Detention Centre