Journalist Phil Miller has uncovered that, following the direct action against a charter flight at Stansted airport, the Home Office is has ‘secretly militaries’ Britain’s deportation process. 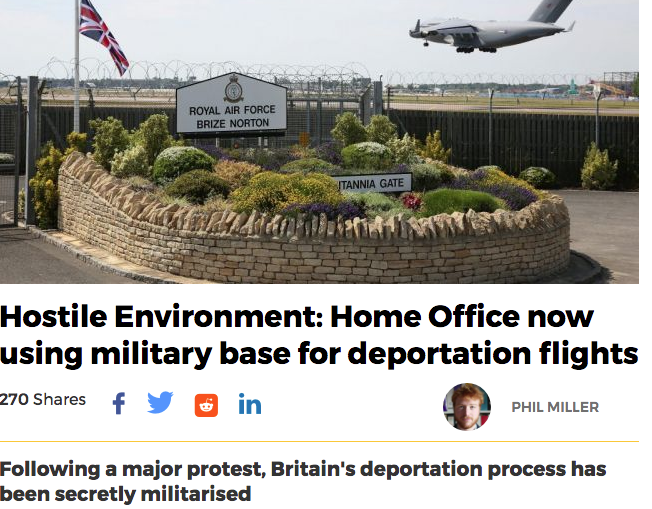 “Britain’s Home Office used a Royal Air Force base five times last year to deport hundreds of people to west Africa, it has emerged. The military’s involvement in the ‘Hostile Environment’ policy, initiated and championed by Theresa May during her tenure as home secretary, was uncovered by JOE through a freedom of information request.

Deportations to Nigeria and Ghana normally take place from London Stansted, a civilian airport, on specially chartered planes. However, the programme appears to have moved to RAF Brize Norton in Oxfordshire, following a major protest at Stansted where activists chained themselves to the wheels of a deportation jet in March 2017.”

Our coordinator, Lisa Matthews described them as “ghost flights” and said she was shocked that “In response to peaceful protest, the Home Office resorted to using the military to enforce the brutal policies of the Hostile Environment.”

The trial of the Stansted 15 is ongoing, and they need your support. If you’d like to support the defendants by sitting in the public gallery during the trial click here for the court rota.

Your solidarity is also welcome online! Be sure to tag @EDeportations and use the#Stansted15 hashtag.