Human rights groups have today published a report laying bare the extent to which the Government’s “hostile environment” policies have infiltrated all areas of UK life. Liberty’s Gracie Bradley tells us about how the guide gives the public, parliamentarians and civil servants advice on how to bring these policies down. 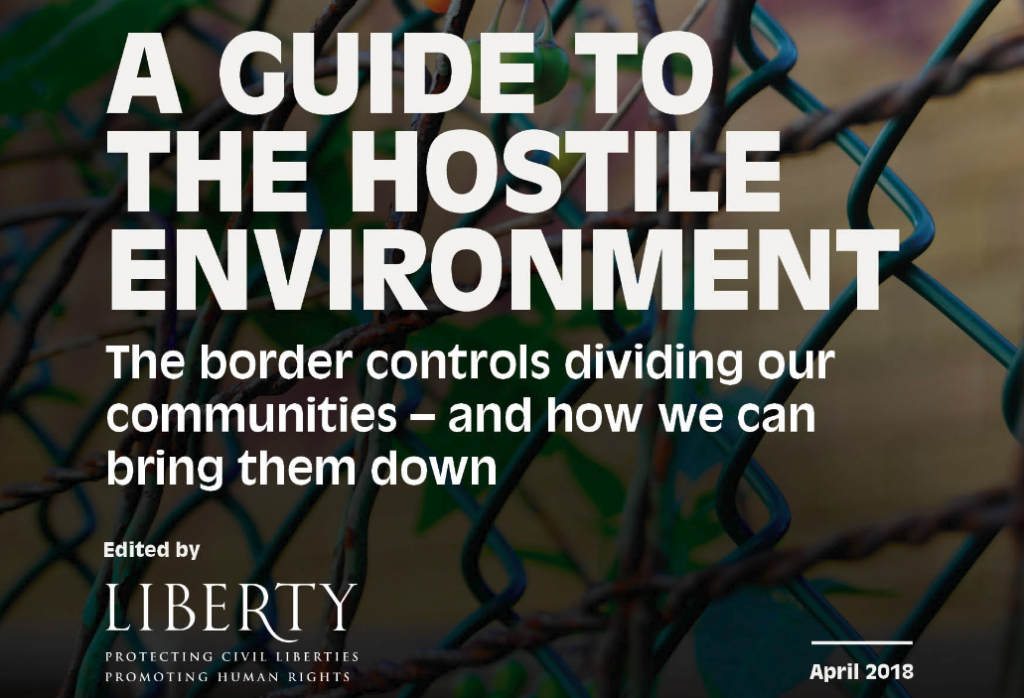 In 2010, the newly-elected Coalition Government created a “Hostile Environment Working Group” to make life as unbearable as possible for undocumented migrants in every area of life.

Two years later, Theresa May (then Home Secretary) explained that logic to the public, stating: “The aim is to create here in Britain a really hostile environment for illegal migration.”

That aim, implemented primarily by the 2014 and 2016 Immigration Acts, is now a reality. The Government requires employers, landlords, private sector workers, NHS staff and other public servants to check a person’s immigration status before they can offer them a job, housing, healthcare or other support. Landlords and employers can face fines and even criminal sanctions if they fail to do so.

At the same time, access to justice has been curtailed for all but a few, through devastating cuts to legal aid and spiralling visa fees. Poor Home Office decision making means that an immigration appeal is as likely to succeed at the tribunal as it is to fail. Coupled with rapidly changing immigration rules, it is all too easy for people to fall foul of our labyrinthine immigration system.

In addition to forcing undocumented people into exploitation and destitution, the effects of the hostile environment reverberate well beyond its stated targets. By effectively outsourcing immigration control to the public and private sectors, the Government has given a green light to racism and discrimination in all areas of life, by fuelling suspicion of anyone who does not appear sufficiently “British”.

And ultimately, we increasingly live in a society in which we are all conditioned to show ID and have our interactions with the State logged, as the Government’s obsession with monitoring and policing migrants demands surveillance of every one of us.

The Government’s attempt to create a hostile environment is dependent on the willing participation of people across society – but that will also be its downfall. Written by nine human rights groups, A Guide to the Hostile Environment explains the Government’s toxic vision and the action we can all take to dismantle it.

Of course, the policies of 2010 did not emerge from a vacuum. Decades of anti-migrant rhetoric and policy from across the political spectrum cleared the path for today’s climate of state-sanctioned hostility. That’s why the guide includes information on older hostile measures, such as employer checks, street stops and raids, and restrictions on access to welfare benefits.

But crucially, it sets out the positive action that all of us can take to stop the hostile environment in its tracks. The last few years of resistance have seen small groups of people mobilising up and down the country to stand in solidarity with the migrants forced into destitution by these measures.

Only last year, North East London Migrant Action brought a callous and discriminatory Home Office policy that allowed for the deportation of homeless European migrants to its knees. Against Borders for Children have spurred two million people to boycott xenophobic data collection in our schools. Docs Not Cops and Doctors of the World are fighting for an NHS that protects the rights to health and privacy of everyone, wherever they’re from. And Liberty is representing Migrants Rights Network in a landmark legal challenge to NHS Digital’s sharing of patient data with the Home Office.

There are lots of things in life that are more important than a person’s immigration status, and it’s high time the Government got its priorities in order. Ministers believe their hostile environment enjoys the broad support of the public – but countless small acts every day show that this is not the case.

Aimed at MPs, professionals and activists, A Guide to the Hostile Environment is a vital and timely tool for anyone who wants to build a country that guarantees people’s human rights, whoever they are and wherever they come from.

Gracie Bradley is Liberty’s Advocacy and Policy Officer. She tweets at @graciemaybe.