On 4 September the Republic of Ireland announced plans for a new “regularisation scheme” to allow certain undocumented migrants to remain in the country legally. The amnesty will be open to anyone who came to Ireland as an international student between January 2005 and December 2010 and is now undocumented. 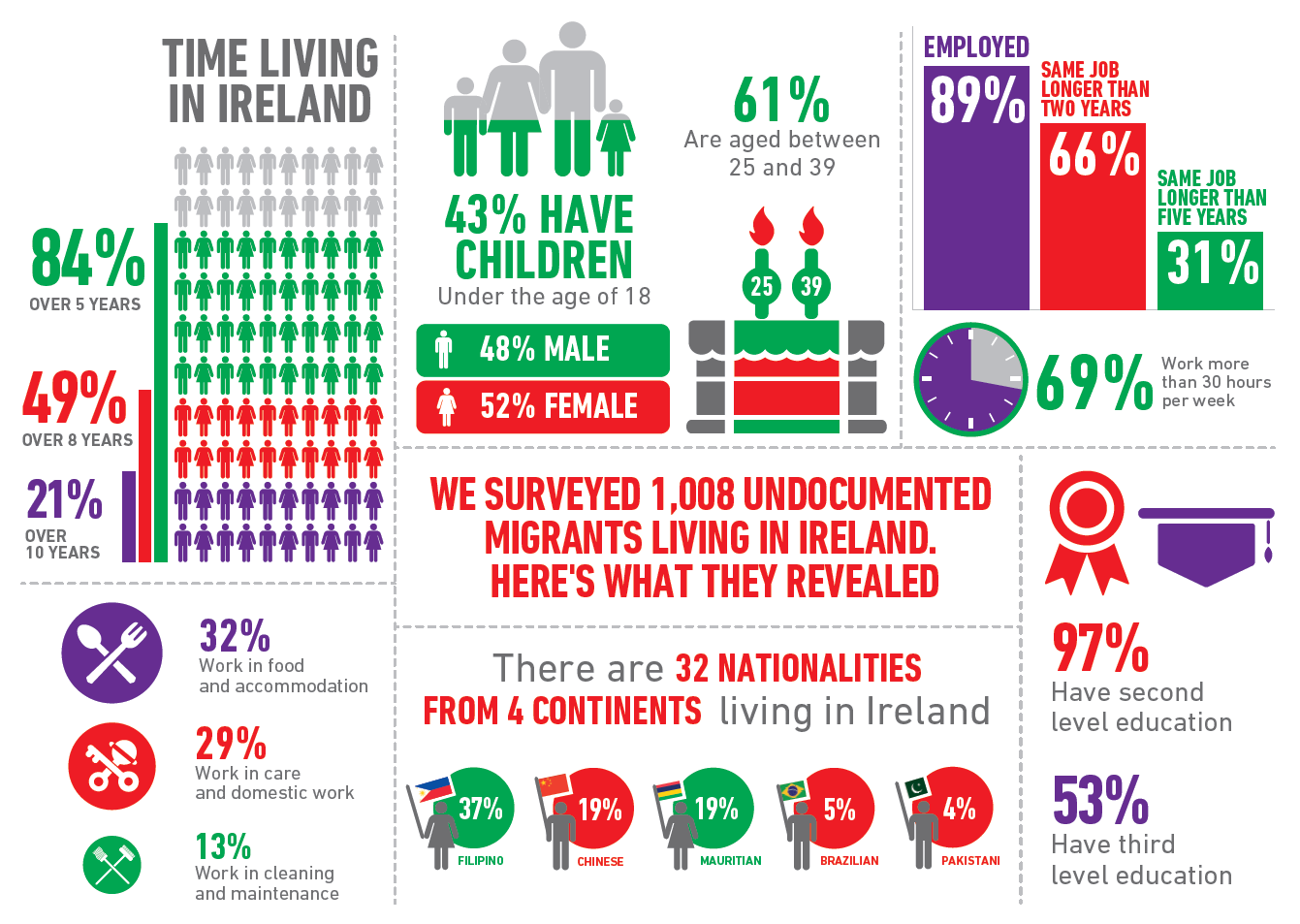 Although few details have been released, the announcement was welcomed by rights groups, including the Migrant Rights Centre Ireland. The charity has been campaigning for years for regularisation schemes for the approximately 26,000 adults and children who work, study, live and love in Ireland without papers.

Reports in Irish media say the scheme could affect up to 5,000 people:

This move follows a Supreme Court judgement that former holders of student permission were entitled to have their family and privacy rights under the European Convention on Human Rights taken into account as part of their application to remain.

Court challenges were taken after the introduction of a new study policy in 2011 which meant non-EEA students could only live in Ireland for a maximum of seven years.

It will be similar to a former scheme which operated in 2011 for students who were already in the State prior to 2005.

Earlier this year a unanimous Supreme Court ruling found that two former students should have had their right to private and family life under Article 8 of the Convention considered as part of their application to remain legally in Ireland. Approximately 400 additional cases were awaiting the ruling.

The Immigrant Council of Ireland noted at the time of the ruling that “while the judgement itself relates to a very specific legal point, the potential impact for many people who arrived in Ireland on valid student visas and became unregularised through no fault of their own, is huge.” The regularisation scheme appears to be the result.

Support for amnesty schemes is mainstream in Ireland, where an estimated 12% of the population are foreign citizens (the UK equivalent is 10%). Major Irish political parties have advocated regularisation schemes, including in election manifestos, and the main opposition party welcomed the move.

We in ⁦@fiannafailparty⁩ have advocated for a regularization scheme for undocumented (visa over stayers) for some time. We published a Bill on same during last Dail. It’s estimated up to 30k approx here impacted. Its a start, more detail required. https://t.co/6c5MuZ9rao

A previous temporary ‘bridging visa’ scheme from 2009 allowed a four-month period for certain people who had become undocumented to secure leave through, for example, finding employment.

Campaigners back amnesty schemes in the UK

The revoking of student visas that made many people undocumented finds parallels in the UK. Following accusations of cheating in English language tests, the Home Office started to revoke student visas en masse in 2014. Two years later, 40,000 students had lost their right to stay and initially denied a right to appeal from within the UK. Senior immigration judges found in 2016 that the evidence used by the Home Office to deport the students had multiple frailties and shortcomings”.

In July 2018 the charity Migrant Voice launched a report which called for affected students (both still in the UK and those who have left) to be given an opportunity to sit a new English language test, and regain their previous immigration status. In September a group of cross-party MPs raised the issue with immigration minister Caroline Noakes, where Labour MP Wes Streeting called it “Britain’s forgotten immigration scandal.”

Strangers into Citizens, a large-scale political advocacy campaign which called for the regularisation of undocumented migrants in the UK, managed to secure political support for a type of ‘earned’ amnesty between 2007-2010. In the 2008 mayoral elections in London, all four leading candidates supported the call for amnesty. A restrictive and punitive regularisation scheme formed part of the Liberal Democrat 2010 election manifesto (it was attacked by Cameron and Brown, and Clegg was at pains to point out was ‘not an amnesty’).

While by no means new, anti-immigrant rhetoric more completely consumed British politics following the 2008 financial crash. Over the past decade securing basic rights and due process for people who do have forms of leave is often hard to imagine, let alone a scheme like that in Ireland (or a US-style DREAM Act). There was no mention of regularisation or amnesty in the 2015 and 2017 manifestos of the major parties.

Yet the issue of immigration amnesties has not gone away. It is a thread that weaves its way through many of the big crises of late. After it emerged that some of the Grenfell Tower tenants were undocumented – and following intense criticism of the government’s approach – the Home Office belatedly offered a 12-month amnesty and eventually a pathway to settlement. Amnesty International and others are campaigning for the rights of “the estimated 120,000 children living in the UK who have neither British citizenship nor immigration permission to be here. More than half of them were born in the UK and many are entitled to register as British citizens under the British Nationality Act 1981.”

Much of the campaigning against the ‘hostile environment’ has explicitly focused not only on the ‘unintended’ consequences (such as racial profiling against UK citizens) but also the intended aims of denying undocumented people health care or arresting them when they report crimes.

Zrinka Bralo of Migrant Organise wrote earlier this year about the need for an amnesty, citing examples of similar schemes in the US, Spain and elsewhere. And while rejected by the government (on the ground that it was unnecessary), a petition calling for an amnesty of those in the Windrush generation who arrived in the UK between 1948 and 1971 received over 180,000 signatures. Post-Brexit, the issue of an amnesty for the millions of EU citizens living here may become more pertinent, especially if take-up of the official registration scheme is poor.

As with the recent changes that will allow many people seeking asylum in Ireland to work, campaigners in the UK will watch these developments closely.

We originally wrote this blog for Free Movement.