Polices forces in West Yorkshire and Kent have begun a pilot progamme that will grant both forces the same powers as Immigration Officers to search ‘non-EEA illegal immigrants’ for UK drivers licenses.

This further outsourcing of immigration enforcement will lead to the increased harassment of migrants, and racial profiling of UK citizens.

The powers are contained in the controversial 2016 Immigration Act, Theresa May’s last before she left her post as Home Secretary and ascended to Number 10. The Act extends Immigration Officer’s powers in terms of stopping someone, and at the same time blurs the line between police and immigration by granting police some of those same powers. 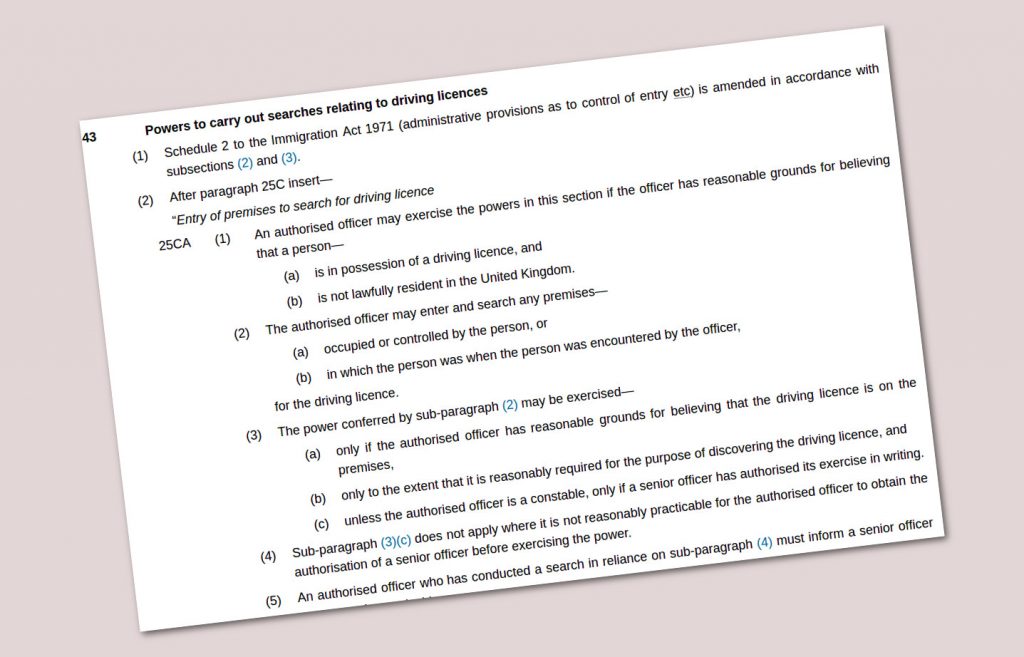 In a letter to the House of Lords, the Home Office position was that these powers were necessary as driving in the UK “is a privilege that should only be enjoyed by those with lawful status.”  (emphasis added) The same rationale has formed the base of the UK’s ‘hostile environment‘ and has brought borders into our bank accounts, schools, homes, and hospitals.

The powers extended those which came into force with the 2014 Immigration Act, which sought to introduced the power to revoke the UK driving licences of migrants who are undocumented or without a right to remain.

The move has been criticised on various fronts, including in a report by David Bolt, the chief inspector of borders. In it he noted that only a small amount of licences are ever returned, that many had already left the county, and others were “wrongly flagged” as being here illegally, and that further ‘the Home Office did not appear to appreciate the seriousness of such errors for the individuals affected’. However beyond the procedural errors in the application of these powers, there is the more important point that depriving people of their drivers licences (and other services) does not result in the Home Office’s stated aim of more people leaving Britain, but instead just pushes them into further insecurity. Moreover, these powers will allow police and immigration officers greater opportunities to intrude in the lives of migrants and people of colour.

The Home Office noted this earlier in the year, stating that “during the passage of the Immigration Act 2016, some concerns were raised around police use of the new powers during vehicle stops, and potential impacts of this on Black and Minority Ethnic (BME) drivers”. However, they maintained that “the Home Office has worked successfully with the police to reform stop and search practices, and the Government has made it clear that no one should be stopped on the basis of their race, ethnicity, or other protected characteristic, as this would be unlawful under the Equality Act 2010.”

This claim clearly does not match with reality, as just this month the racist application of immigration enforcement was made clear – up to1 in 3 people stopped in immigration stops being UK citizens (and a greater number having some form of legal status). This illustrates that often no ‘evidence’ is being used to warrant these searches other than racial profiling. And the racism inherent in stop and search by police has long being noted.

In flagging up the trail scheme earlier this year, the Migrant Rights Network reiterated their stance to the section of the bill and stated:

“Given the historical issues with stop and search policies, it is likely that ethnic minorities will disproportionately be subjected to driving licence checks, and again mistakes in the system will result in citizens being wrongly arrested. It is doubtful whether the harm caused by denying a group of people in the UK the ability to take driving lessons and pass a driving test which promotes public safety, is outweighed by whatever the supposed benefits are of such a policy”.

The Home Office have stressed that this is a pilot, and concerns raised will inform the future roll out of the policy. However, the Home Office routinely ignores responses to their own consultations, and other where pilot schemes (such as Right to Rent, or Universal Credit) have come under fierce criticism the policy was still rolled out nationally without alteration.

Given the news this week of the Home Office’s intention to introduce “new laws will give the Home Office the power to snoop on the personal data of millions of people for ‘immigration control'”, it is hard not to see this move as simply another attempt to further extend the reach of immigration officials and the police into our communities and personal lives.