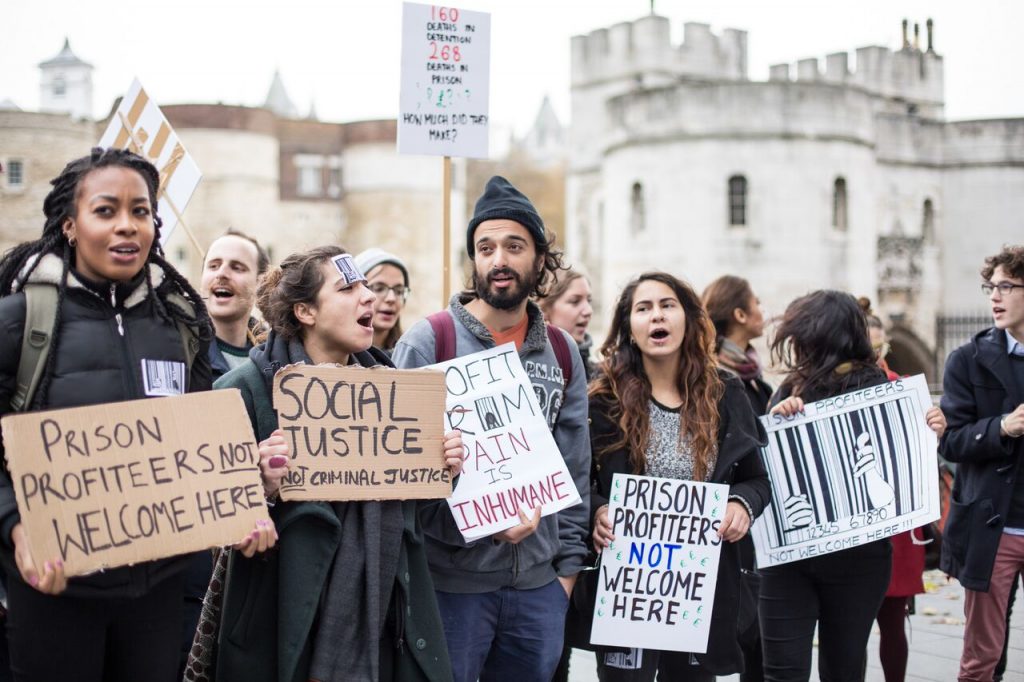 The Tower of London has been a tourist attraction for as long as anyone can remember. But on 15 November the infamous tower was back in action, opening its doors to host the European Custody and Detention Summit. Despite the talk of progressive reform, the £1,500 per head summit was a closed-door trade fair for private security corporations and their public partners.

In a complete reversal of the ‘innocent until proven guilty’ principle, the life and liberty of migrants and asylum seekers in the UK are routinely stripped away. Our government detains them more often and for longer than any other European nation – including war refugees, torture survivors and those with special needs. Britain is the only European nation with no time limit on immigration detention and over 30,000 people are incarcerated every year in a system rampant with abuse. Meanwhile, the government continues to ignore its own experts and wriggle out of endless human rights obligations and outsource responsibility for its devastating policies to private security companies like G4S and Serco. 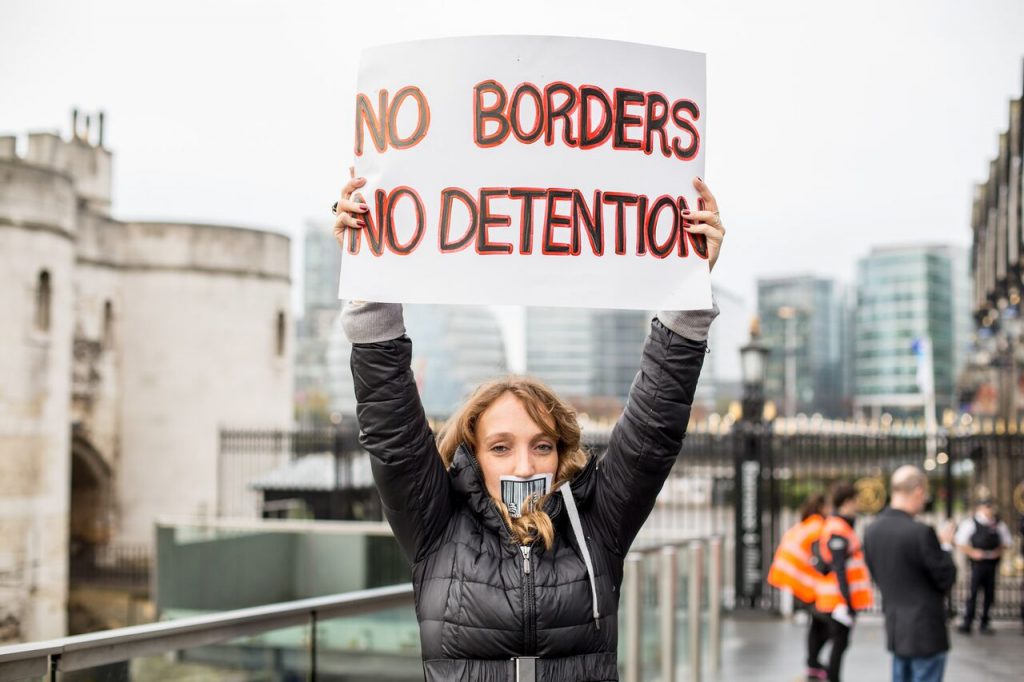 It’s a far cry from the international persona Britain projects as a nation of individual freedom, human rights and equality before the law. But today in the UK, being undocumented means being criminalised while legal aid cuts make access to justice through the courts increasingly difficult. Meanwhile, communities are divided as we are pressured to police each other. Hospital staff, teachers, employers, local authorities, charities, contractors, travel operators and now banks and landlords are all coerced into playing border guard.

Incarceration is a costly and inhumane response to people forced to cross borders by conflict, climate change and crushing poverty – all deep social crises in which countries like Britain have long been and remain deeply complicit. Yet instead of taking responsibility for the consequences of its actions and the lives destroyed by them, the government continues to build new prisons, erect new walls and incarcerate men, women and children for nothing but the “administrative convenience” of the Home Office – and the profit of private security companies.

Protesters made their presence felt

A few days ago, organisers agreed to hear what the summit’s hosts, International Research Networks, had to say. IRN facilitates exclusive networking events for almost every sector undermining climate and social justice, from arms dealers and oil companies to investment banking. Their representative expressed regret that several participants had pulled out after the protest was called – including delegates from G4S and Serco. They also claimed to have cancelled their business matching sessions and some immigration and border enforcement events. 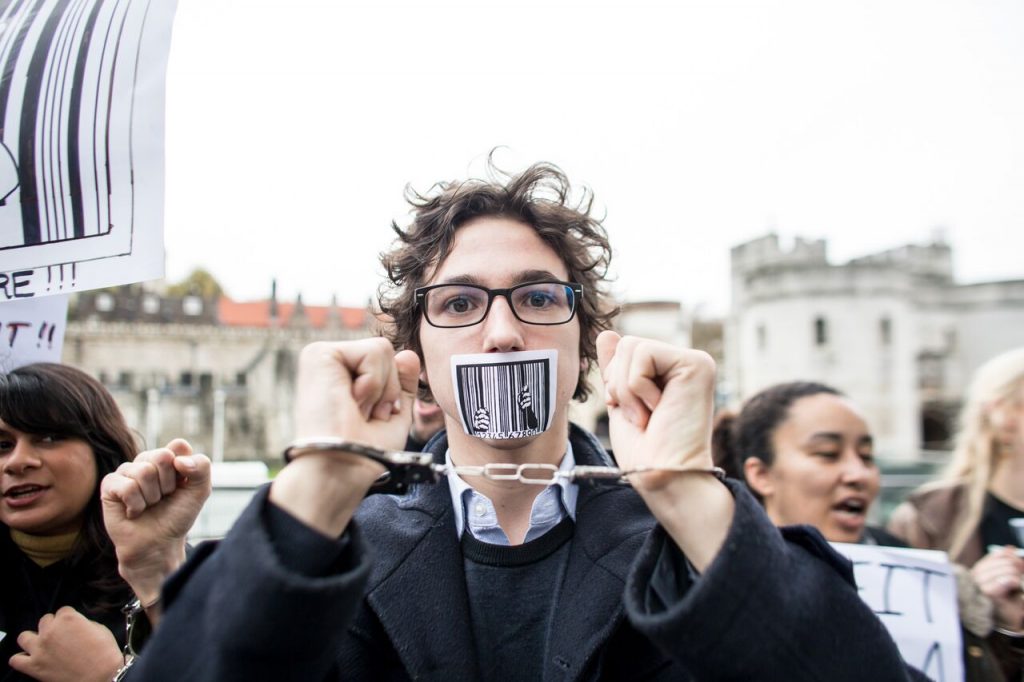 ion to work with the industry by reference to its rapid expansion in Britain and Europe. They emphasised the role of reform and NGOs becoming “key providers of criminal justice and security services,” but denied that privatisation helped drive this expansion, in stark contrast to the figures and widespread concern amongst civil society that Britain has become the ‘mercenary kingpin’ of the global private military industry. They refused to reveal how much profit the summit would make and warned that no attempt should be made to enter the tower or block the walkways, reminding organisers that there were armed police inside and that they would “hate to see anything happen” or anyone “fall foul of a broken criminal justice system.”

The protest, called by Reclaim Justice Network, brought together a range of groups campaigning on migrant rights, criminal justice and the arms trade. We turned out before work to stand handcuffed at the entrance for the opening of the summit, demanding an end to privatisation in the sector and calling for ‘social justice not criminal justice’ and returned again that evening. One protester was aggressively confronted by a participant from the summit. “He squared right up to me,” she said, “shouting that he couldn’t understand why we’d be protesting. I suggested he listen to what we were saying.” But the public response was overwhelmingly supportive, if shocked.

The campaign has made a real impact and cut into the summit’s profits. Though the Tower of London trustees refused to cancel, its effect on their public image forced a prompt change of advertising, with all references to the Tower of London as “the world’s original high-security prison” swiftly deleted and an apology for any offence taken. But this isn’t about slogans offending political correctness. It’s about an unjust, racist and violent system making profit from people’s misery.

The creeping privatisation of criminal justice should concern us all. Its impact in the USA, where the experiment has been most widespread, has been devastating both socially and economically. It led to a drastic rise in incarceration for non-violent crime – more African American men in prison now than were subject to slavery – and solitary confinement, dangerous conditions and forced labour have become routine. Of course, you are vastly more likely to be affected if you come from a low-income background – even in some UK prisons, more than half of inmates were never taught to read and write properly.

The knock-on impact of all this on families, loved ones and communities is immeasurable and by 2016 even the Department of Justice was issuing damning reports. Obama pledged to end the use of private prisons. Meanwhile, in countries like Norway where the criminal justice system puts rehabilitation before punishment and profit, societies have been rewarded with drastically lower rates of re-offending, creating safer communities and stronger economies as a result.

It is deplorable that at this moment, when more people are forced to leave their homelands than ever before, multi-billion pound companies present militarisation on our borders and incarceration within them as the solution when there are so many just alternatives. Now, the kind of technological ‘security solutions’ promoted within the industry are even being used to keep humanitarian volunteers out of Europe’s refugee camps and obstruct lifesaving operations at sea. And when state-sanctioned violence is outsourced to private companies, creating a profit motive for punishment, the government thinks they can’t be held to account. They “see no evil, speak no evil.” But we see it; the families and communities torn apart, they see it; and we came together to speak against it, because this isn’t the migrants’ crisis – it’s ours. It’s about taking responsibility for the kind of society we’re creating and willing to live in; about asking us what it means to think of ourselves as ‘civilised’. Because that defines who we are, too.