Yesterday we attended an APPG meeting on the Windrush scandal. Entitled “Undocumented Caribbean residents – the uncertain status of Commonwealth citizens in the UK”, and hosted by the Runnymede Trust, it was an important and urgent meeting. 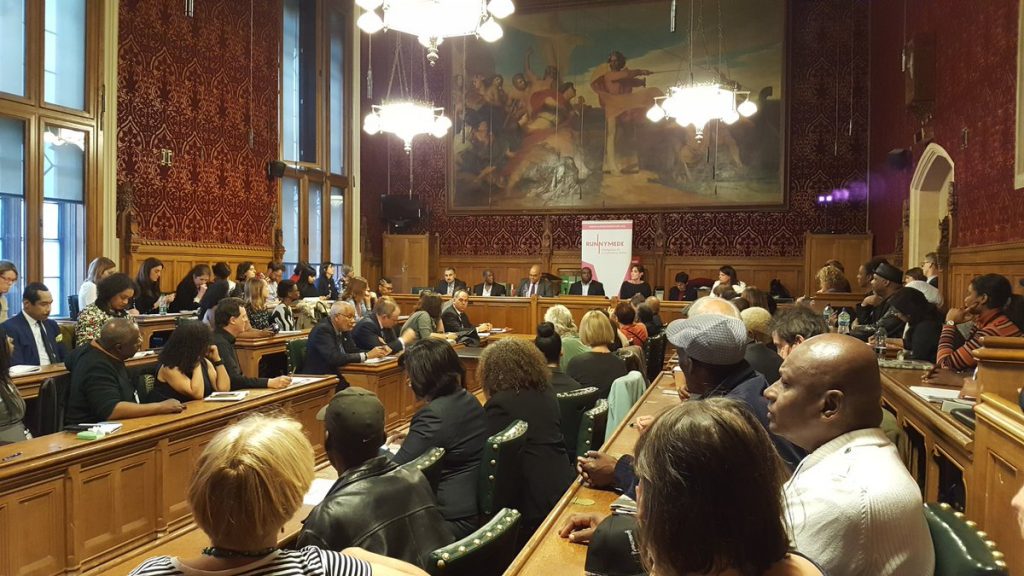 Speakers included several high-profile Labour MPs, including David Lammy, who has been raising the issue in and out of parliament and organised the event. The room also heard from Diane Abbott, Jeremy Corbyn, and Dawn Butler. Abbott said the issue of the hostile environment was broader than Windrush, and that Labour’s “commitment is to hold the government to its word.”

Corbyn said if one positive thing has come out of the Windrush scandal, it’s that for the first time in ages the debate has changed. People are questioning where our country is, and where it is going. He reminded the crowd said the whole issue of hostile environment could have been avoided – warnings were given at the time it was proposed. He said that parliament needs to amend the 2014 and 2016 Immigration Acts that brought the hostile environment into force.

Thank you @DavidLammy for hosting today's meeting in parliament about achieving justice for the Windrush generation.

As @HackneyAbbott has said, @Theresa_May must take full responsibility for her role in the Windrush scandal. pic.twitter.com/qboXZEdUPc

The MPs promised to raise various issues in today’s Windrush debate in parliament. Issues that will be raised included those stranded in the Caribbean, unable to return to Britain; the 1973 cut-off date; and what compensation people are owed. Dawn Butler promised to raise the issue of controversial charter flights (one is scheduled for the near future). Reiterating an earlier call, she said: “This Tory government is institutionally racist.”

News reports state that Labour will today use a special parliamentary procedure that could force the Government to publish all papers and emails on the Windrush scandal – including details of Mays own role in the affair.

In a sign of the intense pressure the government is facing on the issue, Immigration Minister Caroline Nokes was also in attendance. She said she was not there to talk at length, and did not expect a warm welcome, but wanted “to say sorry”. She said it will be “a huge job for the government to regain trust.”

The room also heard from Barbados High Commissioner Guy Hewitt, who has been raising the Windrush issue with the government. He said that the issue of the UK’s treatment of the Caribbean goes way beyond the current scandal, and back to “the unholy trinity of colonisation, sugar, and slavery.”

Sally Daghlian, CEO of Praxis, the charity supporting “Albert Thompson“, said that “this is not a small problem, but a systemic problem.” She spoke of the work her charity does in regularly helping hundreds of deal with the hostility of Home Office policies, and that many people fall into homelessness and destitution because they can’t prove their status. Daghlian mentioned the UK’s system of immigration detention –  “one of the biggest scandals” – as well as the upcoming data protection immigration exception measures, and how it will make the current situation much worse.

Elders from the Caribbean communities affected by the Windrush scandal addressed the room, including Sarah O’Connor, Elwaldo Romeo, Anthony Bryan. Sylvester Marshall – who was denied NHS cancer care and went under the alias Albert Thompson while his case was being resolved – spoke briefly: he talked about the ‘nightmare’ of being caught in this limbo, and thanks those who fought with him. Paulette Wilson, who at 61 has lived in Britain for 50 years, and was an ex-cook at the House of Commons, spoke of being detained in Yarl’s Wood detention centre. To her supporters, she said: “I want to thank everyone for being HUMAN and not racist.”

Others spoke of the severe effect of the hostile environment on their mental health, with one speaker saying they contemplated suicide. The current hostile political situation was likened to the days of the National Front. Many gave special thanks to Amelia Gentleman, the Guardian journalist who has covered many of the stories in the past months, and spoke about her work. People repeatedly stressed how the issue is wider than Windrush.

Thank you to everyone who came to Parliament today to talk about the Windrush scandal, how it has torn lives apart and where we go from here. It was my honour and privilege to host you and I promise to fight for justice on your behalf. We will not rest until this wrong is righted pic.twitter.com/GROFtxx2FS

During the Q&A, NGO workers and other members of the public raised several points. Chai Patel of JCWI showed that, despite headlines in The Times about changes to the hostile environment, these were only cosmetic changes. The government is still trying to roll out ‘right to rent’ immigration checks – one of the central planks in the hostile environment – to Scotland, Wales and the north of Ireland. (JCWI are crowdfunding to challenge this).