Campaign by Women Against Rape.

Noela Claye suffered horrific rape and other violence in 1995 in Sierra Leone during the civil war. In November 2013 she won the right to stay in the UK. Having already endured so much, Ms Claye was then faced with the unceasing cruelty and inhumanity of the UK Home Office, who attempted to appeal the decision to grant her the right to remain.

Ms Claye heard she had won when she went to court on 2 May for a “case management review”. Instead the Judge ruled there and then that the Home Office had failed to take into account what Ms Claye had suffered, and granted her Indefinite Leave to Remain in the UK. 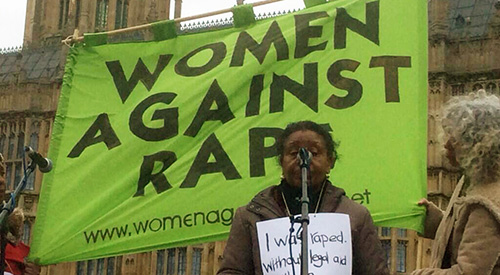 Ms Claye was supported by Women Against Rape, who enabled Ms Claye to speak about her traumatic experiences and gave evidence in court on her behalf.

Ms Claye has also spoken to large crowds at demonstrations against legal aid cuts, speaking out against the cuts.

I could not have won my case without all the kind support I received from my friends, family, women from WAR, the public and from lawyers who worked for free after I was refused legal aid. During this time, I was also caring for my niece, a mother of two, who was suffering from breast cancer. She passed away on Mother’s Day which has caused us so much shock. I feel that what the Home Office put me through hastened her death. I must now keep a steady head and take care of her precious children to try to bring love and happiness into their lives.

Women Against Rape have outlined the many barriers Ms Claye faced in securing justice and the right to remain in the UK, including: