The walls of Yarl’s Wood were surrounded by unprecedented numbers on Saturday as up to 2,000 people from all corners of the country joined a protest at Britain’s most infamous detention centre, mired for years in accusations of systematic psychological torture, deprivation, sexual assault and rape. The protest was organised by Movement for Justice, and was probably the biggest ever at a UK detention centre. 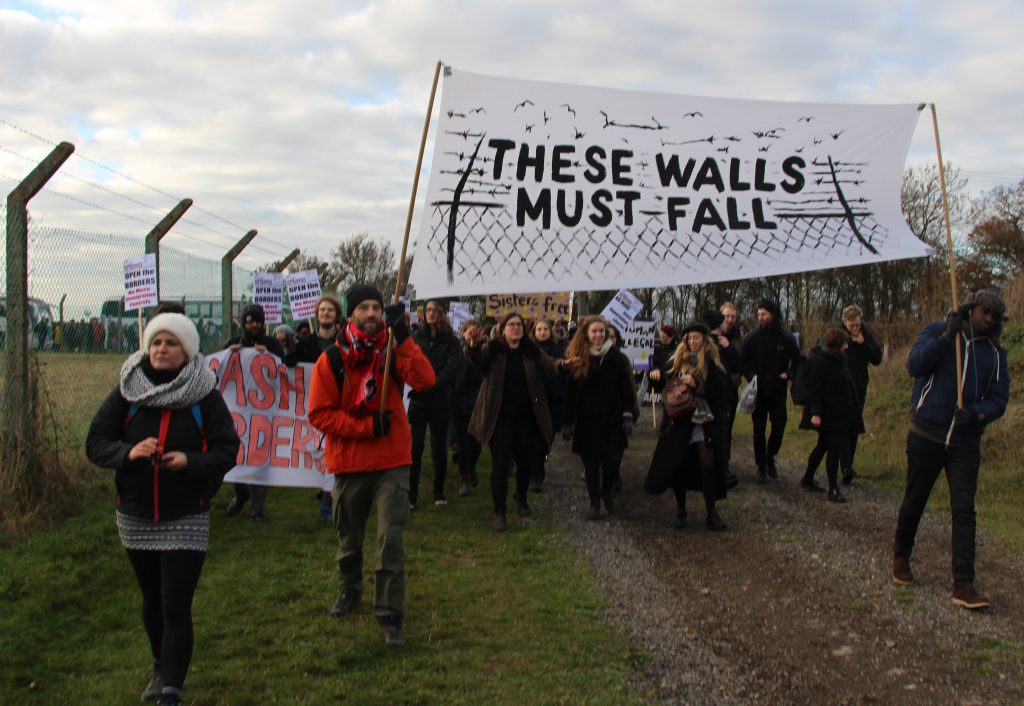 While representing a much broader system of abuse and injustice – with over 30,000 people incarcerated in Britain every year just for not having correct immigration papers – there is a reason Yarl’s Wood looms large over the migration justice movement; a reason no journalists or cameras are allowed inside; a reason even representatives of the United Nations were barred from entering. It holds hundreds of women indefinitely, in prison-like conditions which compound the psychological impact of past trauma; more than half of these women are survivors of rape and sexual violence, one of whom describes her treatment there as “like being raped all over again.” 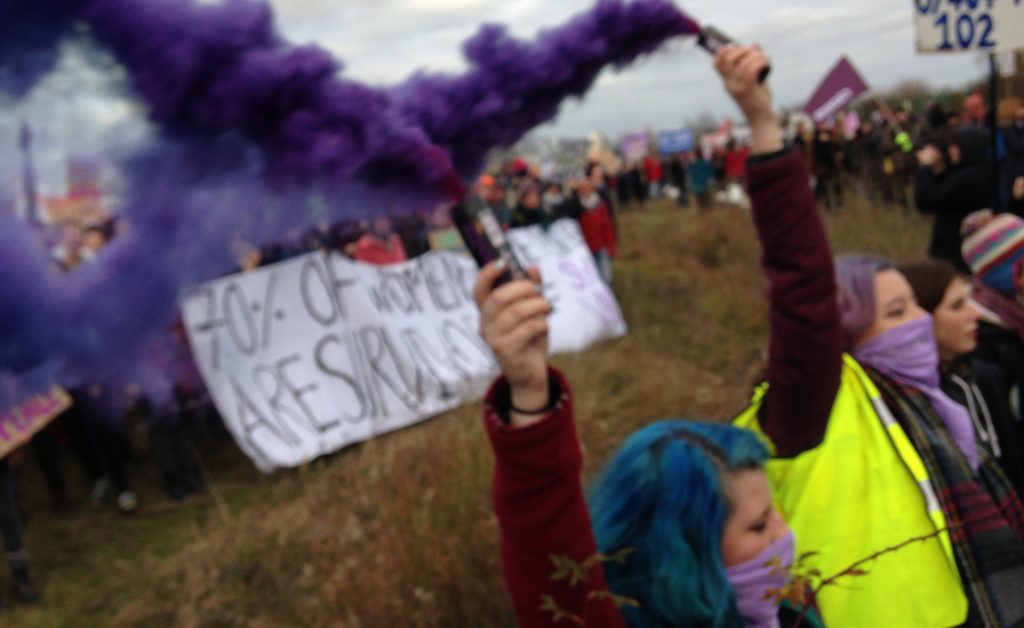 Over a year after the chief inspector of prisons called out Yarl’s Wood as being ‘of national concern’, nothing has changed. This year alone three guards were brought up on fresh sexual assault charges, and Theresa May’s administration refused to reveal what it knows about further rape allegations and the actions taken against 28 Yarl’s Wood staff since 2007. Healthcare and food standards are also notoriously poor and reports of racist abuse by staff and self-harm by the women detained there seem endless. Asylum seeking women are also legally more vulnerable with their claims twice as likely to be unfairly rejected.

“I know what the women inside are facing. This place is a house of horror!”

Lucy’s powerful voice carried over the fence towards the centre. “I know what the women inside are facing. This is a house of horror!” Beyond, arms waved through gaps in the windows, which barely open; shut tight like a prison; like the eyes of a nation that can’t bear to face them. The arms waved socks like banners – it’s all they have – and one, a scrap of paper that simply read: ‘helpless’.

Lucy was once detained here; on Saturday, she returned at the head of a 2,000 strong crowd of protesters to demand Yarl’s Wood be shut down.

“There is nothing to compare it to. They don’t treat our people like human beings,”

Lucy continued: “There is nothing to compare it to. They don’t treat our people like human beings,”  She recalled how when guards used to come and gather women up for charter removal flights (secretive mass deportations flights), they would resort to stripping off their clothes – so male guards couldn’t abduct them – and standing together in the middle of the room, gripping each other’s hands to stop anyone being torn away. Hearing that story right outside the foreboding place where she once lived it, was chilling. And as she directly addressed her sisters still inside, her voice broke; she closed her eyes and pushed forwards.

“Please, don’t be scared! They can’t kill you. So don’t be afraid of anything! Fight the fear in your mind. Don’t be afraid to talk about what you are facing… And outside we will all join hands to fight this battle!” 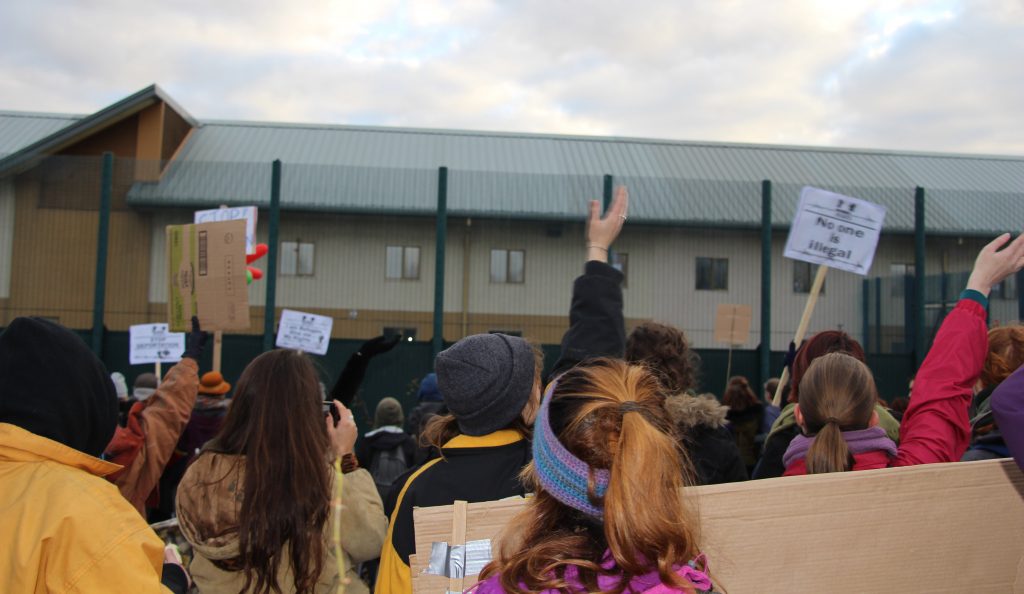 On Saturday, that fight entered a whole new phase. It was the biggest ever march on Yarl’s Wood, and probably as big as the 2005 protest at Dungavel, (during the G8 summit in Scotland), but protesters also reported that the mood has changed. And this is to be expected. The sheer scale of this crisis has forced the most barbaric elements of our asylum and immigration system into the cold light of day: from countless drownings in the Mediterranean and slave-like conditions in Libya, to our own government’s racist and xenophobic Hostile Environment programme.

On top of that, the rising tide of hate crime and racist scapegoating by politicians and the media is opposed by the majority of young people in this country. We understand that demagogues like Theresa May and Nigel Farage, while they also threaten our public healthcare, housing and education systems, will build their power base on one issue: immigration enforcement. And this is also part of what brought such staggering numbers of young people to Yarl’s Wood on Saturday, chanting: “money for jobs and education, not for racist deportations!” 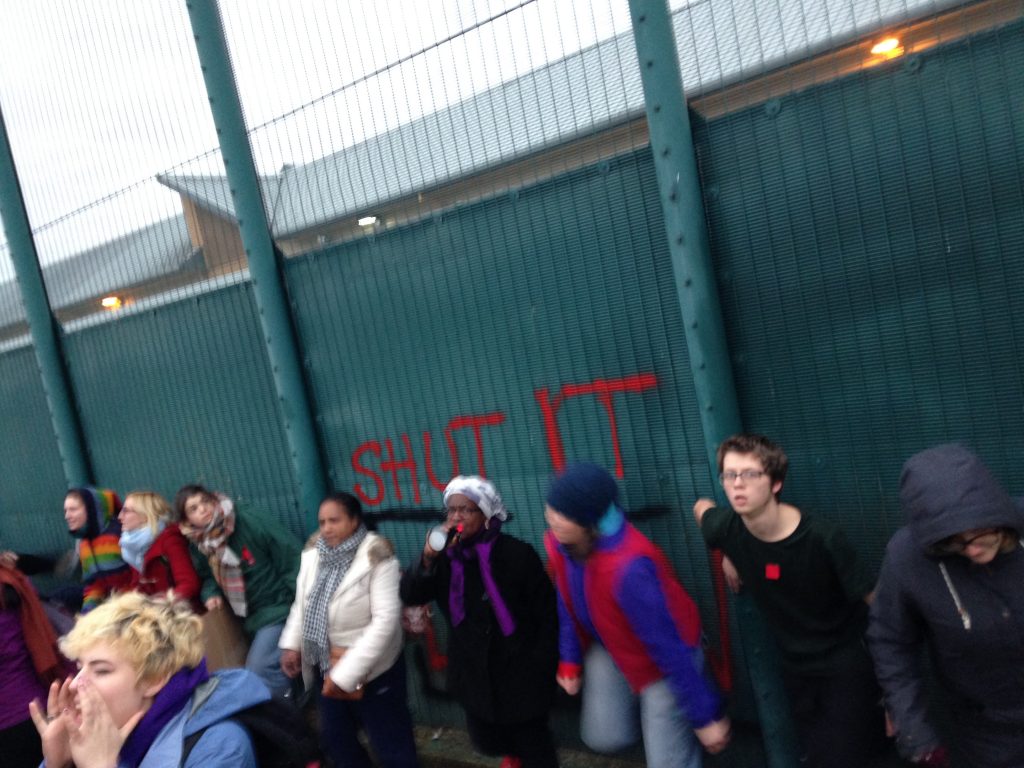 But money is still being wasted on this abuse. Despite growing consensus that urgent, systemic change is required, the government has completely ignored the recommendations of the 2015 All Party Parliamentary inquiry into detention, and its own internal Shaw review, published in January. Since these reports were published, people are now being held for longer periods, more torture victims will be detained, and despite a time limit being introduced on the detention of pregnant women, the government refuses to reveal how many are being held under an “exceptional circumstances” loophole. No wonder people are angry.

The march had snaked across several fields, through the frozen mud to the back fence where it could make itself heard from inside. While some hung a rich tapestry of banners along the outer walls to be viewed from the windows, hundreds of people lined up along the inner fence, scaling ladders, and attacking the fence with kicks and kitchenware. 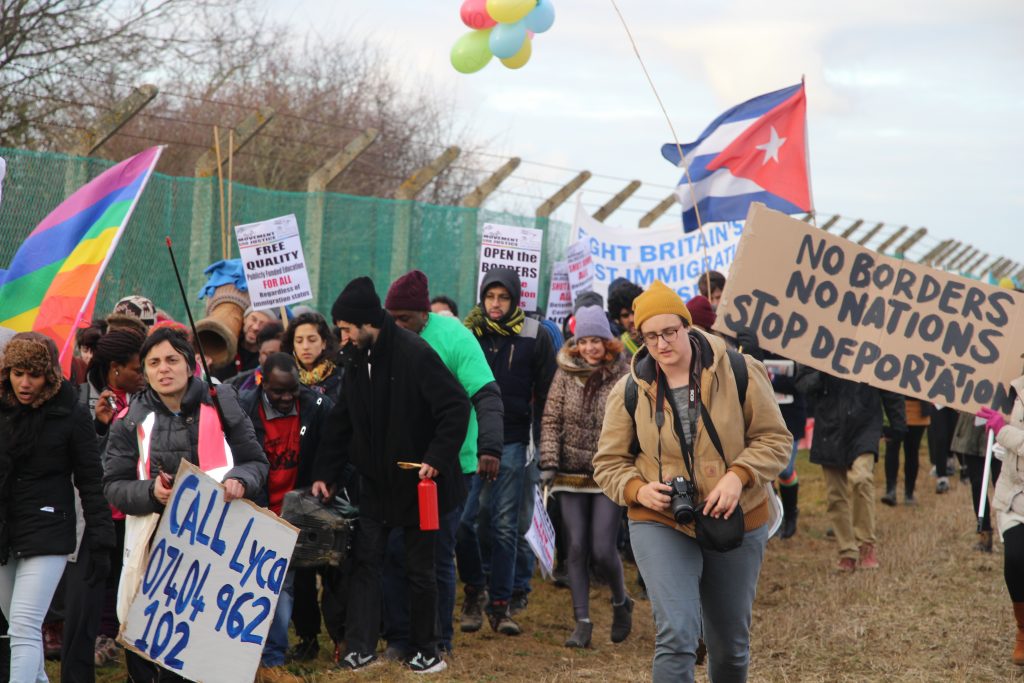 “The women aren’t allowed social media or news access online and many will be locked away unable to see us,” one student explained. “So this is how we tell them we’re here – and how many of us are here!”

People hung balloons from the fencing and wrote messages of love and solidarity on the walls. Despite freezing temperatures the chanting, dancing and banging went on for hours, spurred on by a rising tide of outrage as the crowd heard live testimony from women inside via the sound system. 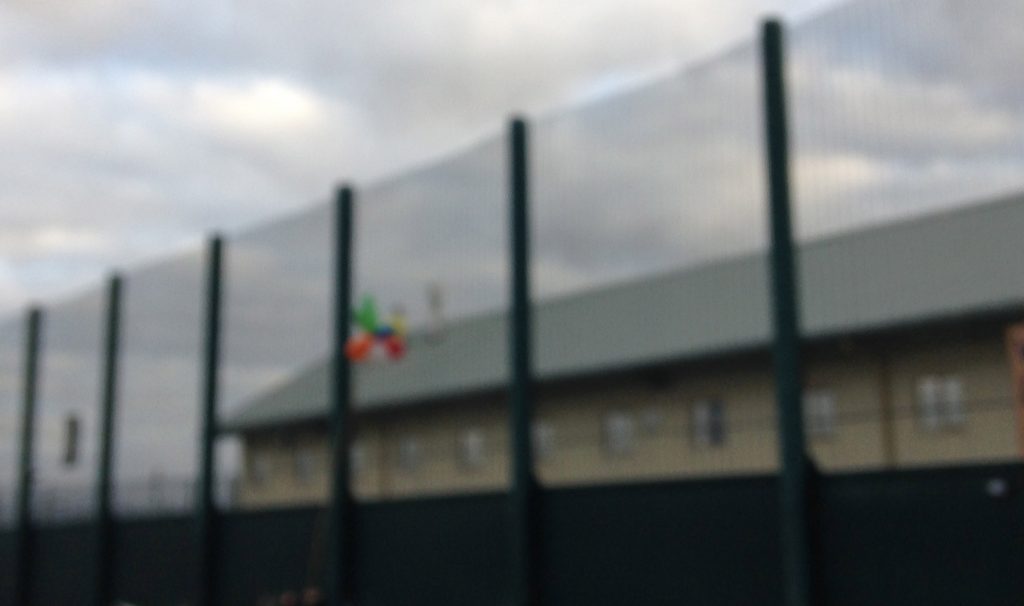 “There’s a tuberculosis outbreak inside right now, and the disease is spreading, but no one cares,”

“I want to thank you, from the bottom of our hearts, ever single one of you who came here,”

added an older woman, her voice brimming with gratitude.

And lastly, a young mother:

“We just want freedom! We want our human rights, to go to our children, we want justice! And we won’t surrender, ever! We’re gonna tell the truth!” 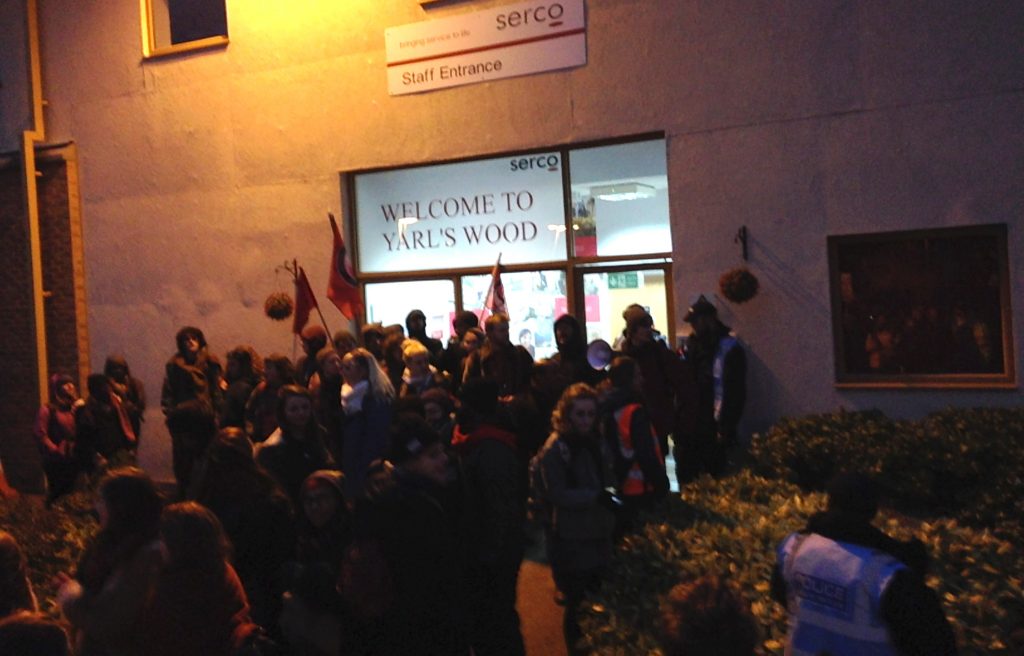 In a remorseless move by SERCO, who hold the £70 million contract to manage Yarl’s Wood, this time the centre was put on lockdown, with detainees stopped from moving freely inside to see and hear the protest. This proved to be a mistake. As the sun was setting, hundreds of protesters flooded around the front of the building to the front entrance, to be heard by the women kept locked on that side. As darkness fell, a group of demonstrators managed to pry off the metal plating of the vehicle entrance. The group gained access for a short time; just long enough to make some noise within the walls before retreating. While brief, controlled and peaceful, it was like watching the invasion of some medieval fortress.

Tearing into those walls was a powerful symbolic act. But if we want to see them fall we must declare war on the walls we cannot touch: the borders going up in our hospitals and our schools, our workplaces and communities, dividing us into deserving and undeserving of basic rights; the politicians that hide behind corporate responsibility and the corporations that hide behind the state; the racism that divides our communities and will make excuses for the most appalling abuse.

That will be a longer fight. That will be a harder fight. But we must commit to it now with all our strength, for ourselves, the women at Yarl’s Wood, and the tens of thousands like them being failed by a brutal, unfair system being enforced in all our names.

If you want to start a community campaign against detention in your area, check out These Walls Must Fall. 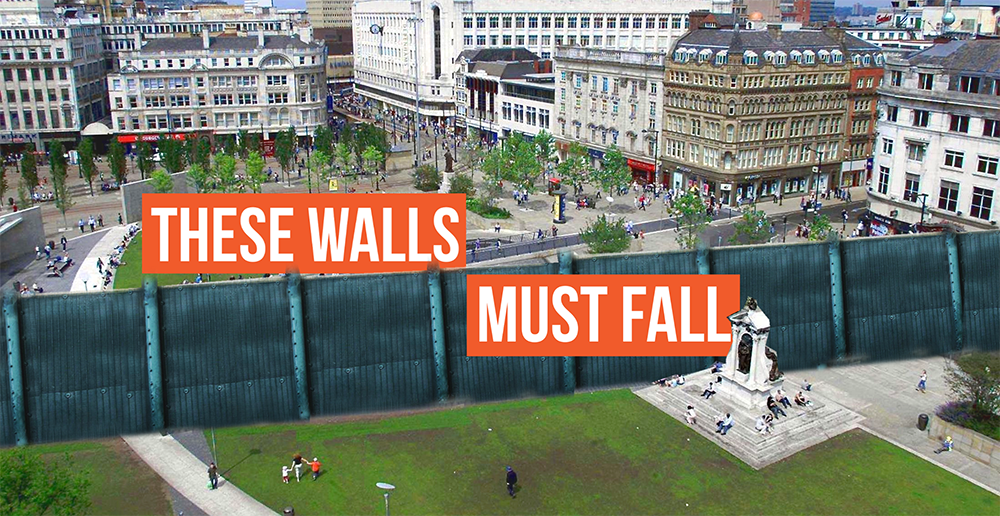