In this guest post, Aylisha Hogan of Housing4All writes about the group are doing to combat homelessness for people seeking asylum in Belfast.

Last week, activists and supporters from the asylum seeker-led Housing4All group held a protest outside the head offices of Northern Ireland Housing Executive (NIHE) – the local body with responsibility for social housing and homelessness. Protestors gathered outside, singing and dancing, in defiance of the rain. 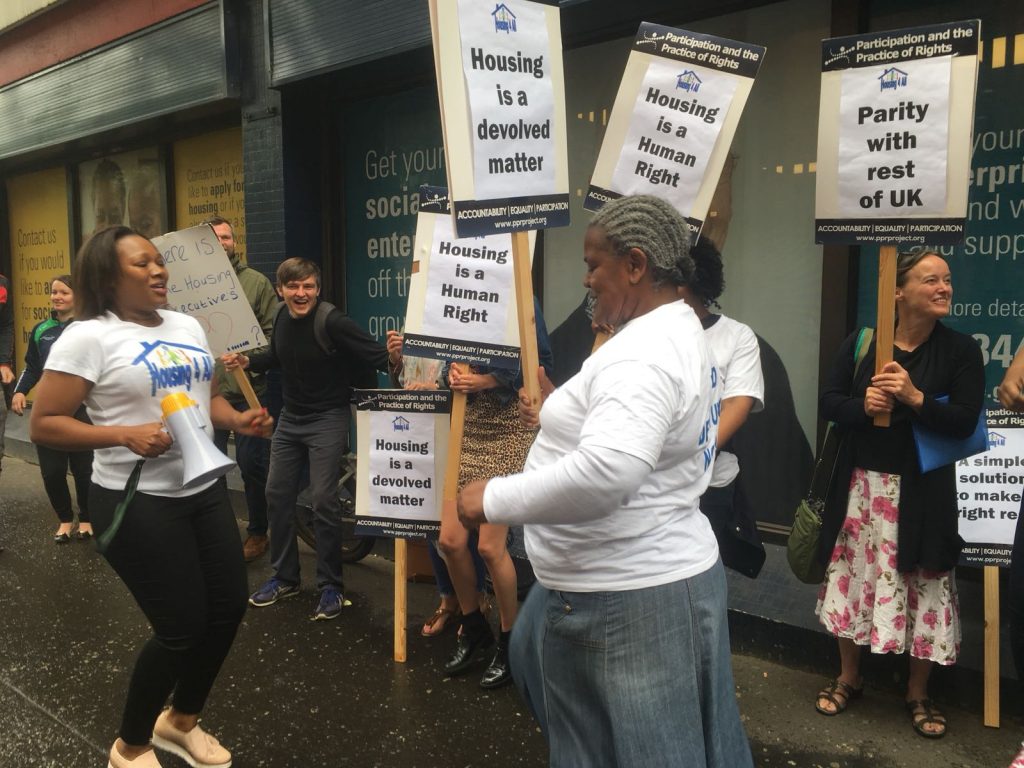 Asylum seekers throughout any stage of the process live in fear of homelessness. In 2016, 62% of asylum claims were refused, yet 42% of these decisions were overturned upon appeal. Whilst in the process of making an application for asylum in the UK asylum seekers are provided accommodation by the Home Office and given a weekly allowance of £37.75 per week. Upon refusal and whilst in the in-between stages of making an appeal, Home Office support for asylum seekers is withdrawn leaving them completely destitute.

At any one time, there are likely to be 100 people in this situation in Northern Ireland. Research carried out by Housing4All among destitute asylum seekers in Belfast in 2015 found that 63% had been homeless on more than one occasion since seeking asylum in Northern Ireland, and 50% of these individuals had been homeless on more than three occasions. Furthermore, there are wholly inadequate support mechanisms in place for destitute asylum seekers. These people are vulnerable and at serious risk of violence, abuse, and exploitation. They are also denied access to hostels ordinarily accessible to homeless people because they have ‘no recourse to public funds’.

That is why for the past two years’ Housing4All have been working with a housing association and charity partners to introduce a pilot project which would house 9 female destitute asylum seekers.

The project was developed following a model used in Britain, where a range of schemes exist, through which Housing Associations work with other charities to provide accommodation for destitute asylum seekers. These schemes are completely legal, and do not fall foul of the fact that asylum seekers fall into a category of people who must have ‘No Recourse to Public Funds’. They use no public money and rely on organisations to carry out charitable functions.

This month, the NIHE blocked the launch of this pilot project, almost a year on from our formal request to start the project. This came despite a NIHE staff member attending planning meetings during which they indicated they would have no issues with the project going ahead.

So protestors gathered last week, and called for the chief executive, Clarke Bailie, to publically state his reasons for blocking the project from going ahead.  Housing is a human right, and if the NIHE is truly committed to ‘preventing homelessness’ as one of its key strategic objectives, then NIHE need to stop creating a hostile environment for asylum seekers and remove the barriers blocking this project from going ahead.

Keep up to date with Housing4All on Facebook and Twitter, and get in touch if you live locally and want to get involved: Housing4allni@gmail.com