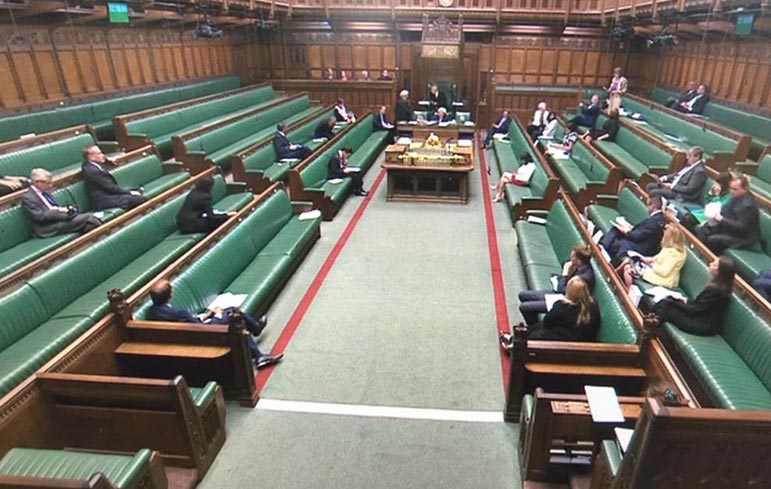 ‘That this House supports the recommendations of the report of the Joint Inquiry by the All Party Parliamentary Group on Refugees and the All Party Parliamentary Group on Migration, The Use of Immigration Detention in the United Kingdom; has considered the case for reform of immigration detention; and calls on the Government to respond positively to those recommendations.’ 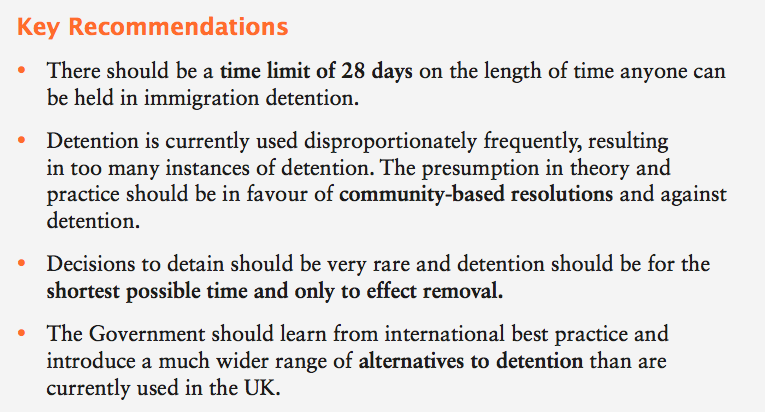 It is hugely important that this debate finally happened, given the scale of UK detention and its increasing use.  The UK detains more people than any other country in EU, other than Greece.   Last year, Germany detained three people for every twenty that the UK detained, despite receiving over four times as many asylum applications.

The UK is the only country in the EU that locks people up in prisons under immigration powers.  At the end of the first quarter of 2015, the UK is detaining more people than ever.

It was hardly a packed house for the debate, which shows we’ve still got a long way to go to convince the majority of MPs that this really is a priority issue – one of the gravest civil liberties issues in the UK now – even if there is no detention centre near their constituency, and even if ‘only’ 30,000 people are detained each year (none of whom can vote).

The message that came out of our national conference on Saturday, from people who recorded short videos about detention for our alternative debate (#UnlockTheDebate), and indeed from the debate yesterday was that detention affects far more than those who are detained. Families, friends, communities, society as a whole is harmed by this unjust practice.

One of the MPs who spoke in the debate admitted that they did not know anything about detention until they heard about the debate, because in her constituency there isn’t a detention centre (immigration removal centre in the Home Office’s misleading terminology – over half of those detained are released back into the community, not removed from the UK, raising the much asked question of why they were ever detained in the first place).  But detention – its mechanisms of reporting, immigration raids, bail hearings and post-release accommodation – is everywhere, and it’s an issue for all communities, across the UK.

Rupa Huq MP Doesn't have detention centre in constituency, but constituents are detained. Responsibility of all MPs #detentiondebate

.@SeemaMalhotra1 reads out spread of MPs representing constituents concern across the UK – all our communities are impacted #DetentionDebate

You can watch the whole debate here, or read the Hansard transcript of what was said.  Alternatively, re-live the live commentary from the world of Twitter by searching #detentiondebate (which trended yesterday!).

It was a passionate and informed debate.   Anne McLaughlin had us all on the verge of tears as she recalled one particular encounter with a family in detention.

"Mummy, I don't want to be here anymore. We should die." – @AnneMcLaughlin witnessed 9 year old in YarlsWood tell his mum. #DetentionDebate

Many MPs spoke of the need to implement a time-limit on detention (the UK is the only country in Europe without one), and fundamental reform of the system as recommended by the inquiry.  There was also welcome discussion of the need for alternatives to detention.  Detention costs huge amounts of money – far more than community alternatives – and has an uncountable cost on human lives, dignity and spirit.  In 2013/14, the cost of running the detention estate was £164.4 million, with the cost of detaining one person for one year being £36,026.  The government could save £380 million over five years by adopting community-based alternatives to detention.

The speakers agreed with the inquiry panel that ‘tinkering’ with the detention system is not enough. Radical change is needed.

Right to Remain believes that the inquiry recommendations should be implemented immediately, as a first step to ending all detention, for everyone.  We were heartened to hear MPs recognising the recommendations as a start, and not the end.

Yes! @johnmcdonnellMP – yes, implement recommendations of inquiry today, but all the centres must be CLOSED #detentiondebate

A 28-days time limit is a good start but it is only that, says Margaret Ferrier MP #Time4aTimeLimit #detentiondebate

All twenty-five MPs voted to endorse the inquiry recommendations.  This was hardly a surprise, as every single speaker in the debate had spoken out against the current detention regime.  This very much echoes the striking message of the inquiry report – “We cannot go on as we are”.

Eerie silence at #DetentionDebate when all those against #DetentionInquiry recommendations asked to speak up says it all. #NoJustification.

No dissenting voices on the shame that is immigration detention.  That is, until James Brokenshire (the Immigration Minister) got up to respond to the debate.  Brokenshire tried to rely on incorrect semantics to claim the UK does not in fact detain indefinitely.  It does. The UK cannot detain someone permanently, and lawful detention can only be for a ‘reasonable period’ prior to removal.  Detention is indefinite however, as the person detained has no idea when they might be released.  Furthermore, in practice, people are detained for long periods when removal is clearly not imminent, leading to many successful claims for damages due to unlawful detention.

Brokenshire desperately deploys slippery language because he knows that truth is not on his side.  Relying on words games is surely a sign he is on the backfoot.

. @JBrokenshire describes removal of due process of law (access to representation, appeals etc) as "streamlining" #detentiondebate

Keeping the pressure up

The parliamentary debate is a huge achievement, as is the vote in favour of the report’s recommendations (albeit a symbolic vote).  We need to keep the pressure up, and convince more MPs that the time for change is NOW.

You can get involved right away.  Unlocking Detention starts on 21 September, and is a great way of raising awareness of detention and engaging your MP.  Check out the Unlocked website and see how you can join the ‘virtual tour’ of the UK’s immigration estate, shining a spotlight on this hidden injustice.

Movement for Justice are also fundraising for their next demonstration at Yarl’s Wood on 7 November.   Read about how powerful the 8 August demo was here.  These demonstrations are a very visible sign that people want change, and are a great way of showing solidarity with people detained.