Last month, the organisation Bail for Immigration Detainees (BID) released a briefing on the current situation of post-detention accommodation.

Already a problematic area, post-detention accommodation is now a crisis situation following the changes made in January 2018 (which you can read about on our blog here) which included the abolition of Section 4(1) accommodation.  This accommodation was provided by the Home Office to people released from detention with nowhere else to stay, and with no other forms of support available to them.

BID set out the different accommodation provisions for different groups of people in this handy table: 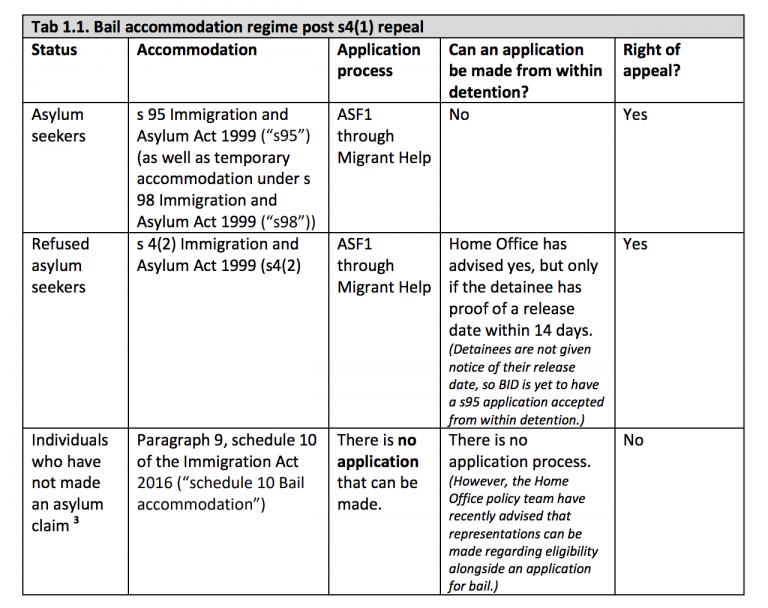 The briefing highlights how severe a crisis this has become.  Under the 2016 Immigration Act changes, the Home Office “may provide, or arrange for the provision of, facilities for the accommodation” for someone who is detained if otherwise they would continue to be deprived of their liberty.  However the Immigration Act (paragraph 9 of Schedule 10) say this power “applies only to the extent that the Secretary of State thinks that there are exceptional circumstances which justify the exercise of the power.”  As BID point out, there is no actual process for people to apply for this exceptional circumstances accommodation.

In response to an FOI request, the Home Office acknowledges that it has granted only 24 addresses under Schedule 10 in the 1st 5 mths of this year as compared to 2,824 grants of Sec 4(1)(c) accommodation during 2017. #detentionisnotaccommodation

As you can see in the table above, refused asylum seekers can apply for accommodation under section 4(2) of the Immigration and Asylum Act 1999 if they have proof that they are due for release within 14 days … but people in detention are not given a date for release.

As a consequence of the repeal of s4(1), in many cases detention is being used for the sole purpose of accommodating detainees who have no address.