Alice is the Senior Programme Officer at the Refugee Rights Data Project (RRDP), which is dedicated to documenting human rights violations against refugees and displaced people. 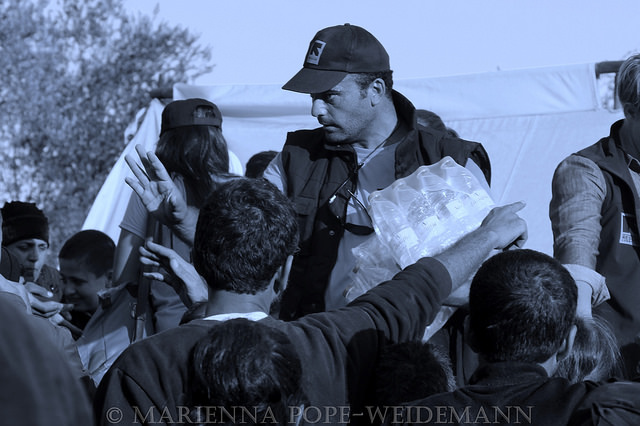 The humanitarian crisis unfolding in Europe has received sporadic attention by the press and is characterised by a stark absence of larger organisations, governments and UN agencies speaking out against the widespread human rights violations endured by refugees seeking sanctuary within its borders . What has emerged from this situation is a powerful, inspiring civic response to the crisis, with grass-roots initiatives raising donations and filling the place of larger service providers to support refugees and people in displacement across Europe.

While the humanitarian response has been integral in meeting the needs of some of the world’s most vulnerable people, there has been a worrying silence by established human rights groups; groups that hold sway with decision makers and are well placed to call for the implementation of longer term policies.

Refugee Rights Data Project (RRDP) is a human rights organisation responding to this silence, documenting the human rights violations and unmet humanitarian standards experienced by people in displacement across Europe.

Born out of a desire to generate a strong yet nuanced call for change, our founder reacted to the lack of a clear and consistent presence of human rights groups standing up for the human rights of refugees and displaced people by launching RRDP on International Human Rights Day 2015. Struck by the fact that human rights norms, which have so frequently been held up by decision makers as a guiding principle of how we should relate to the world and as the backbone of policy-making, had apparently ceased to matter in Europe, RRDP was born as a result of the need for a long term approach to securing human rights for refugees and people in displacement.

“Human rights norms had apparently ceased to matter in Europe”

RRDP is made up of professionals from a variety of sectors, all contributing to RRDP on a voluntary basis. Our team consists of researchers, students, NGO professionals, policy analysts, journalists and corporate sector employees. We document the human rights situation across the European continent; so far we have interviewed approximately 3,500 displaced people in Europe from more than 20 countries, documenting their lived realities. We have produced 11 reports with a twelfth soon to be published and have trained and deployed more than 60 researchers to different locations across Europe including northern France, Paris, Germany, Sweden and Greece.

We believe RRDP is unique because we go to places where most of the larger organisations, governments and UN agencies are unable, or in some cases unwilling, to go.

We investigate the sensitive issues that others are sweeping under the carpet, documenting, for example, the gender-based violence faced by many women in displacement, police violence, and the continued failure by the EU and UK government to implement effective policies to protect vulnerable children in displacement.

Our role is to highlight situations that demand our full attention and to amplify the voices that are seldom heard. Through our research, we are trying to effect change in two ways. Firstly, we are hoping to encourage decision makers and influencers to acknowledge the lived realities of refugees in Europe, and encourage them to prioritise human rights as they make decisions that directly affect these lives.

By framing our findings around the Universal Declaration of Human Rights, we hope that all groups and influencers across party lines and affiliations can take onboard the serious nature of these findings, and recognise that it is first and foremost a human rights situation, a humanitarian crisis; a situation characterised by serious human rights failures unfolding in Europe. At the same time, we are trying to mobilise wide-spread public support for human rights centred policy making, so that the communities and grassroots organisations can call on decision makers at local, national and EU levels, and request that they do everything they can to uphold the rights and dignity of people seeking sanctuary in Europe. It is our hope that our research empowers communities and grassroots organisations by equipping them with powerful, evidence-based reports that lay bare the reality of human rights for refugees and people in displacement.

The current refugee response just isn’t good enough – it falls short of some of the most basic human rights and humanitarian standards which we expect to be upheld around the world. We hope and believe that this two-fold approach can help generate impact, and we will keep monitoring, documenting and highlighting the lived realities of refugees for as long as it’s needed. 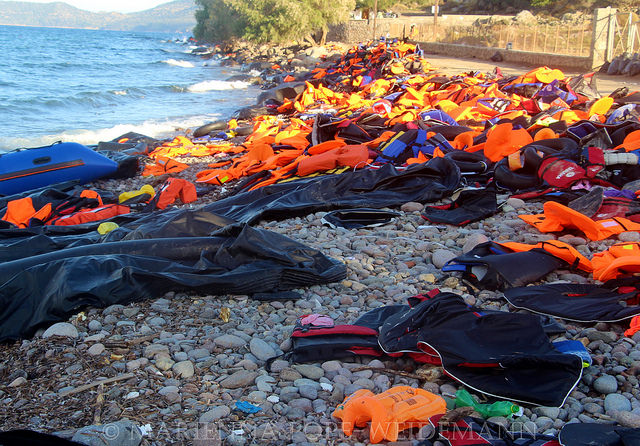 So far our findings paint a harrowing picture on the human rights of people in displacement, documenting chronic police violence, lack of access to medical services, including for reproductive health, a stark absence of information available to refugees and below standard living conditions. Our recent report conducted in April 2017 highlighted the situation faced by unaccompanied minors in Calais and the surrounding area, six months on after the demolition of the ‘Jungle’ camp. The results from our research painted a shocking picture. We found that:

As well as focusing on the situation of unaccompanied minors in Calais, our team have recently documented the humanitarian crisis taking place in Chios, Greece, which is at present the island that receives the largest number of new arrivals. What we found was an island at breaking point, bowing down under the weight of severe overcrowding, physical and mental health issues and lack of safety.

The current lack of support and services we witnessed on the island is particularly alarming considering that the majority of refugees on the island are escaping war and turmoil in Syria, Iraq and Afghanistan. We believe that the recent decision by the EU to withdraw funding from NGO’s operating in Greece is critically misguided; we are calling for this decision to be reversed, and for transfers to mainland Greece to be accelerated. The situation demands immediate action, and we have created a petition calling on the EU Commissioner for Humanitarian Aid & Crisis Management to reverse the decision and continue to provide emergency funding until the situation has stabilised.

What can people do to help?

We are often contacted by people that want to help. What we need is to get the information circulating as widely as possible, so we encourage people to read and share our reports with social networks, family, friends and colleagues.

For those based in the UK, we also recommend writing to your MP and local councillor about the human rights situation in Europe. Our website contains letter and tweet templates to get you started and details of where you can find out more information on your MP’s voting record on supporting refugees. While we seek to contribute to long-term sustainable policies to the refugee crisis, the situation faced by refugees and displaced people in Europe requires immediate and urgent action. You can also help by donating to the work on the ground, where our partners Refugee Info Bus provide much needed and important support to vulnerable displaced people.

Through our research, we are filling some of the information gaps surrounding refugees and displaced people, in the hope that it can contribute to a more nuanced debate on the refugee crisis and shine a light on the human rights violations taking place across the continent. Our aim is help create an evidence-based policy environment in which decision makers recognise the human rights of refugees and displaced people and seek long-term, sustainable solutions to one of the most pressing issues of our time.