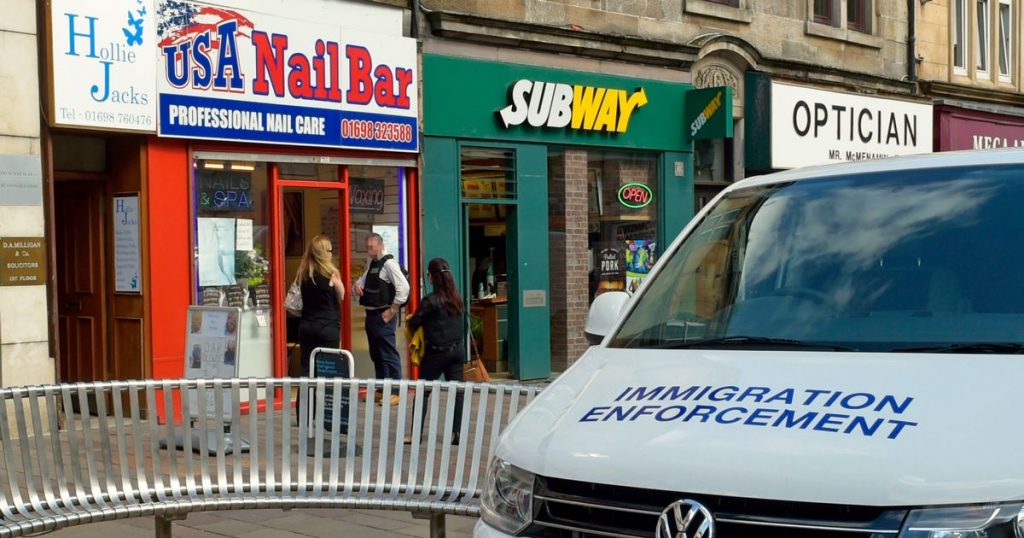 Trafficked to the UK as a slave, you live an invisible life. Not only are you subjected to slavery by the traffickers, as an undocumented migrant you have very limited rights to healthcare, housing or any social support. If you are being exploited, beaten or abused and you go to the police, you face being arrested, imprisoned and deported back to a home country you risked all this just to escape. And what happens to the perpetrators, who traffic human beings as slaves? They will be “warned that they could face fines.” So, not much.

What is human trafficking?

United Nations definition: “the recruitment, transportation, transfer, harbouring or receipt of persons, by means of the threat or use of force or other forms of coercion, of abduction, of fraud, of deception, of the abuse of power or of a position of vulnerability or of the giving or receiving of payments or benefits to achieve the consent of a person having control over another person, for the purpose of exploitation.”

Trafficking and smuggling are not the same thing (even if the BBC and others uses the phrases interchangeably).  Smuggling has to involve the crossing of a border, whereas trafficking doesn’t always.  Smuggling is a ‘crime against the state’ whereas trafficking is a crime against an individual.  And most importantly, smuggling is voluntary: while the conditions leading to it such as war, persecution and deprivation are far from voluntary, engaging a smuggler to cross a border has to be voluntary to be accurately described as smuggling.

Trafficking involves coercion and exploitation.  Trafficking can also be defined by deception – so whilst someone may engage voluntarily in being smuggled, this may become trafficking if deception is used.  For example, someone may voluntarily engage a smuggler to enter a country to work in a hotel.  If the person comes under the control of someone else and is exploited in that work, or is deceived and instead forced into sexual slavery, this could then be defined as trafficking.

Just after Christmas, the government revealed 97 arrests had been made at 280 nail bars in London, Cardiff and Edinburgh as part of ‘Operation Magnify’. Most of those arrested were Vietnamese nationals, along with people of Pakistani, Indian, Nigerian, Mongolian, Chinese and Ghanaian origin. The operation is a government initiative to crack down on illegal and slave labour in what the Home Office identifies as ‘risk sectors’ including construction, cleaning, agriculture, car washing and domestic work. It led to 65 companies being threatened with fines of up to £20,000 per worker: that’s less than the maximum fine for fly-tipping.

In 2015 there was a 40 percent increase in the number of people referred to British authorities as potential victims of slavery: over 3,200 people, almost a third of whom are children. But even those referred and recognised as victims are usually just detained and deported in debt and crushing poverty, vulnerable to being enslaved all over again. Globally, nearly 46 million people remain are subjected to slavery and the government estimates there are over 13,000 people enslaved in Britain.

As Tansy Hoskins writes for Vice: “People trafficked to the UK could typically have been promised a job or a new life abroad, but once they arrive they are told they cannot stop working until the debts they have incurred have been paid off. The International Labour Organization estimates that the total illegal profits obtained from the use of forced labour worldwide amount to over $150 billion per year.”

Many expert commentators have complained that the prevailing attitude of one of denial, with immigration officers incentivised to ‘find any possible excuse’ not to identify victims of trafficking. “The problem is it gives traffickers yet another tool of control over their victims,” Jakub Sobik, spokesperson for Anti Slavery told VICE News. “They can tell them ‘if you don’t do what I say I’ll report you, and not only will you be deported but you’ll be prosecuted too’.”

This attitude will be familiar to anyone familiar with the UK asylum process, where the Home Office finds any excuse possible not to identify someone as a refugee. This is due to a shared conflict of interest: the job of immigration officials is to send people home, not find the truth and uphold human rights.

Yet, in service to this anti-immigration agenda, the lines between migration and human trafficking or modern-day slavery are increasingly blurred. Fiona Mactaggart, co-chair of the all-party parliamentary group on human trafficking and modern-day slavery, says the Modern Slavery Act passed in 2015 is not being enforced. “The Home Office still sees trafficking as an issue of immigration … these are people who are being sold, they are slaves, but we just look the other way. The state is completely failing in basic human responsibility to these victims.”

The legal merging of slavery and immigration forces some of the most vulnerable into an unforgiving system. Ahmed Aydeed, from law firm Duncan Lewis, describes the repetitive cycle of deportation and enslavement trapping many of his clients. One such client, a young Vietnamese woman, was deported after being found working in a nail bar in 2012 “despite clear indicators that she had been trafficked, which were not explored.”

Just 11% of Vietnamese workers referred to the government as at risk of slavery were offered any kind of support or protection, according to the National Crime Agency, even though they are identified as one of the most vulnerable groups. Mr. Ayeed told the Guardian his client was re-trafficked to the UK the following year, raped and forced into a British brothel. She escaped following a miscarriage and was detained for 16 months without being assessed as a trafficking victim, despite scarring on her body consistent with torture and the fact she told authorities she had been forced to work in a nail bar and brothel where she was repeatedly raped.

“I have seen a lot of women being raped and sold as sex slaves,” she said. “We left Vietnam with the promise that we could find work and make a lot of money. We didn’t know we would have to have sex with anyone … If I was ever sent back to Vietnam [again] … I’d rather die here.”

General Secretary of the Trades Union Congress Frances O’Grady said: “Victims of trafficking should be freed, not arrested… We want bad bosses arrested and fines raised so they are a genuine deterrent. Unions and victims of modern slavery should be helped and encouraged to blow the whistle on exploitation.”

As long as the criminalisation of undocumented workers takes precedence over punishing the people who exploit them, modern-day slavery will continue. Simply condemning it as “the greatest human rights issue of our time” is not enough to clean the hands of a conservative party that, let’s not forget, opposed the abolition of the slave trade back in the 1800s. Its arguments haven’t changed much over the past two centuries, either. The owners of the West Indies slave plantations once held as much sway over parliament as today’s international corporations and high street banks; then, it was the plantation owners considered ‘too big to fail’ or for that matter, to jail.

The global financial crash of 2008 – billions of pound worth of fraud, millions of jobs lost, whole economies ruined – shows where corporate immunity gets us. Undoubtedly, it’s time for governments to stop protecting those with wealth and power at the expense of vulnerable workers, be they British or foreign, documented or not. And what better place to start than providing a sanctuary for those enslaved right here in Britain – something it’s hard to even comprehend the need to ask for in the year 2017?