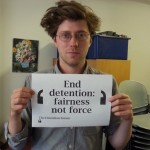 “It is like they can’t let go…They are hooked on detention. They don’t know anything else.”

This what Jonathan said to me when I spoke to him on Friday, the Morning After the Night Before. The Conservative Party had just defied the polls in the General Election, winning the 326 seats needed to form a majority administration. Like everyone else, we’d been prepped to expect constitutional confusion but instead the clarity of the result had left us both bruised and befuddled. Jonathan, who only week earlier had been actively involved in campaigning for a time-limit on detention, said he felt sea-sick. We both watched on television – me from my living room, Jonathan from Colnbrook immigration removal centre – as David Cameron jay-walked his way back down Downing Street, clutching his party’s manifesto.

Of all the manifestos, in all the land…Besides the well-documented vows to raze the Human Rights Act and put EU membership to the vote/sword, the Tory blueprint for government had read like an ode to the enforcement model of immigration control that ultimately culminates in detention. Stock-piled with promises to extend ‘deport first, appeal later’ provisions and stifle individuals’ ability to challenge negative immigration decisions, you couldn’t help but feel Theresa May’s red biro scrawled all over the final edit.

But the winning manifesto was also remarkable for what was not in it.

After decades lost in a policy Bermuda-triangle – adrift somewhere between the Asylum, Immigration and the Criminal Justice systems – detention had gained political exposure like never before in the run-up to this general election. So much so that going into the vote, Labour, the Liberal Democrats, the SNP, Plaid Cymru and the Greens had all included references to the mass incarceration of migrants in their respective manifestos. Labour and the Liberal Democrats went even further, committing themselves to a time-limit on detention, and, in the latter’s case, the introduction of engagement-focused alternatives instead. It had been as if, for the first time ever, the political establishment had looked at itself in the mirror and acknowledged the truth: ‘we have a serious problem and it is time to do something about it.” 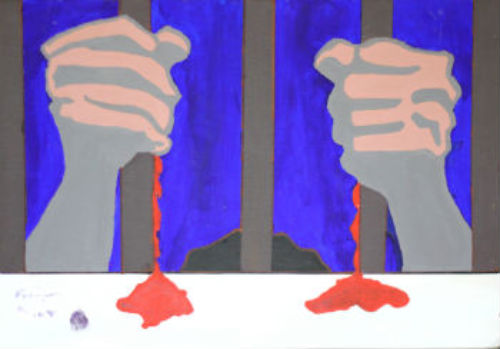 Artwork by expert-by-experience on detention, courtesy of Detention Action

So what brought about this flash of cognizance? There is no doubt that the scale of the crisis in detention over the last few years has pushed the issue up the political agenda. After all, there are only so many instances of self-harm, or sexual abuse, or death in detention, before a politician can seriously deny there is not something fundamentally destructive at the heart of this system, and that radical reform is necessarily urgent. A burgeoning movement of NGOs, activists and survivors of detention have also continued to raise awareness of detention’s pernicious deprivation of liberties and to offer decision-makers a way-out: firstly, by dramatically reducing the detention estate via a time-limit, and secondly, by introducing community-based solutions as a means of closing this ugly chapter in the UK’s human rights history once and for all.

But perhaps more than anything, it was an intervention – in the form of the cross-party Parliamentary Inquiry on Detention – which really forced (at least some) parliamentarians to acknowledge the damage this addiction was doing. And not just to those individuals locked up indefinitely without trial but (as per most addictions) to a whole cast of unfortunates, including partners, families, communities and taxpayers. Like a terrible inverse of the wonderful ‘Who Benefits?‘ campaign, the Inquiry found that in the case of detention, the answer was…no-one.

The final Detention Inquiry report, published in early March this year, found the current UK detention system to be ‘expensive, ineffective and unjust’ and strongly recommended the introduction of a time limit of 28 days. But it also concluded with what almost felt like a ‘you-owe-it-to-yourself-to-change’ / ‘your-addiction-affects-us-all’ prompt for reform:

“Our hope is that this cross party report will provide political courage to whoever wins the general election to look in detail at the way we use immigration detention. For the country and for those we detain, we cannot go on as we are.”

Of course, the key word here is courage.

Beating an addiction is not easy and at first sight, the galling absence of any kind of recognition of our country’s ruinous relationship with detention in the Conservative’s manifesto does not bode well. But the readiness of other political parties to acknowledge this problem, as well as several prominent MPs within the Tories, means that detention advocacy is operating in a very different political landscape now. After years in the wilderness, this General Election campaign has put detention reform squarely on the agenda. Those of us who have campaigned to end indefinite detention (and came so close to having our asks adopted last month) must now display the same courage so evident in people like Jonathan (who, after being previously detained for three years, responded to his return to detention with a steely “I will not let them beat me.”) We must continue to fight, and to encourage new partners to join us in fighting, for an immigration system based not on enforcement but rather on engagement with migrants as human beings, as participants.

Such a behavioral change may be hard to imagine for those who have become so accustomed to our country’s long-standing intoxication with detention. It will be our job to engage these individuals, whatever bench they might sit on in Parliament, and persuade them that the nature of migration management itself is not fixed and ahistorical. It will be our job to persuade them that, with a little courage, it can be induced to change.

Together, we can kick this habit.