Two weeks of coordinated international action against mass charter flight removals was marred by violence in Lagos, Nigeria when military police attacked and subsequently detained two people protesting outside the British High commission on 11th January. Meanwhile, protests have continued across London and the UK, working hard to raise those forcibly removed, and the devastating impact on their families and communities, out of invisibility and onto the nation’s conscience. 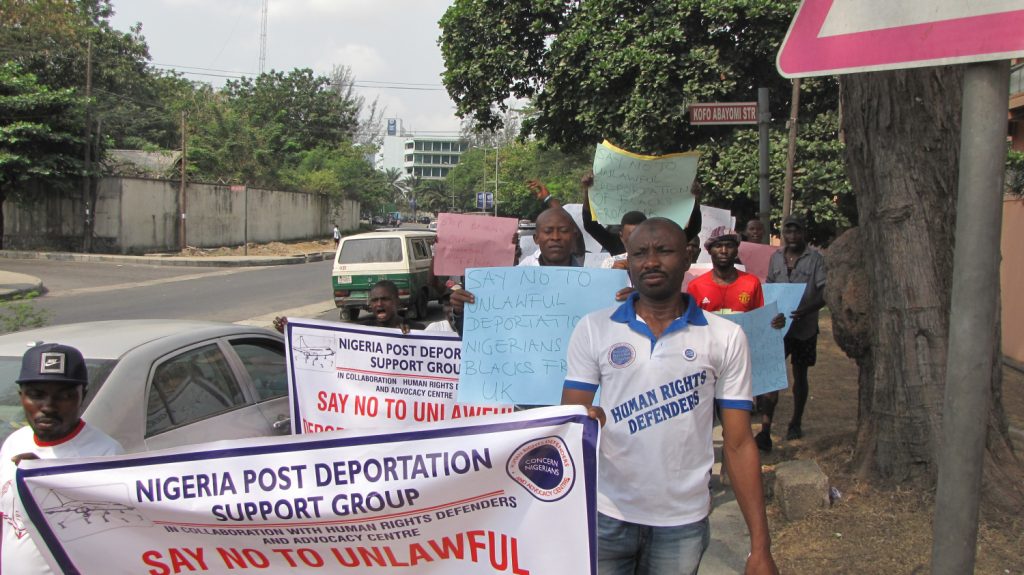 Having initially issued with a letter permitting the demonstration, the police later denied that permission had been given. They confiscated and destroyed placards and banners, beating and arresting two demonstrators for “terrorising the area.” Local human rights groups were soon able to secure their release, but only after they were transferred to police headquarters in Ikeja and reportedly intimidated into giving a written statement about the organisation of the protest. 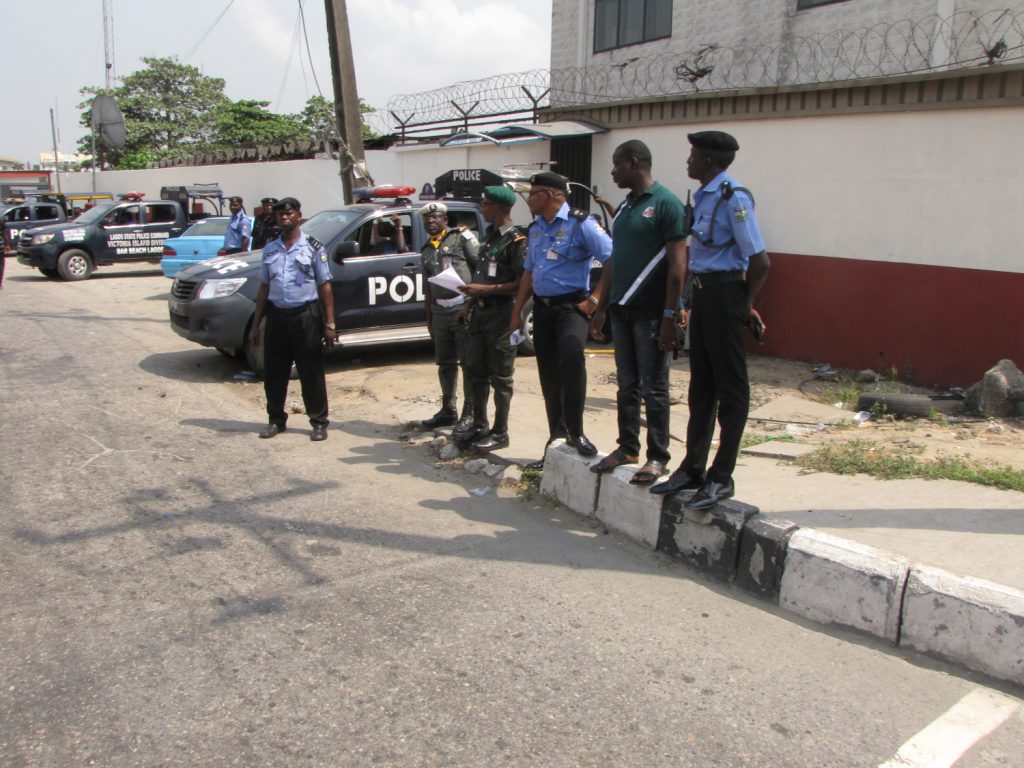 If this was intended as an act of intimidation by the Nigerian state, it appears to have failed. Another demonstration, which organisers had been forced to postpone the previous week, went ahead on 19th of January in even greater numbers, despite police efforts to force protesters back away from the British High Commission.

The Nigerian Deportation Support Group had this to say:

“We marched with our banners and voiced our concerns about charter flights to the media who were present. We were able to hand a letter to the representatives from the British high commission asking them to stop charter flights and unlawful deportations to Nigeria. We told them if our demands are not met we will be back, and next time in Abuja where the high commissioner himself lives…”

Charter flights show how loyal Nigeria is to the UK, motivated by money and bribes and ‘development’, but here we really saw how far Nigeria will go to defend the UK. But we know that the UK doesn’t care about Nigeria and never has, it just wants to deport people and forget about human rights abuses taking place here on its behalf.”

Messages of solidarity can be sent to the Nigerian Deportation Support Group at: post.s30@yahoo.com

Meanwhile, demonstrations have continued across London and the UK. One of those on the Brixton march was Iesha, whose called this community home since the age of 15. A mother of five, her partner – who’d lived in the UK for 15 years and been detained twice in his long wait for status – was removed on one of the charter flights to Jamaica. Iesha told Al Jazeera:

“He phoned me to say he was on a plane, handcuffed. He had been allowed to phone me to say goodbye. I went into labour the next day … my baby wasn’t due for another four weeks.” 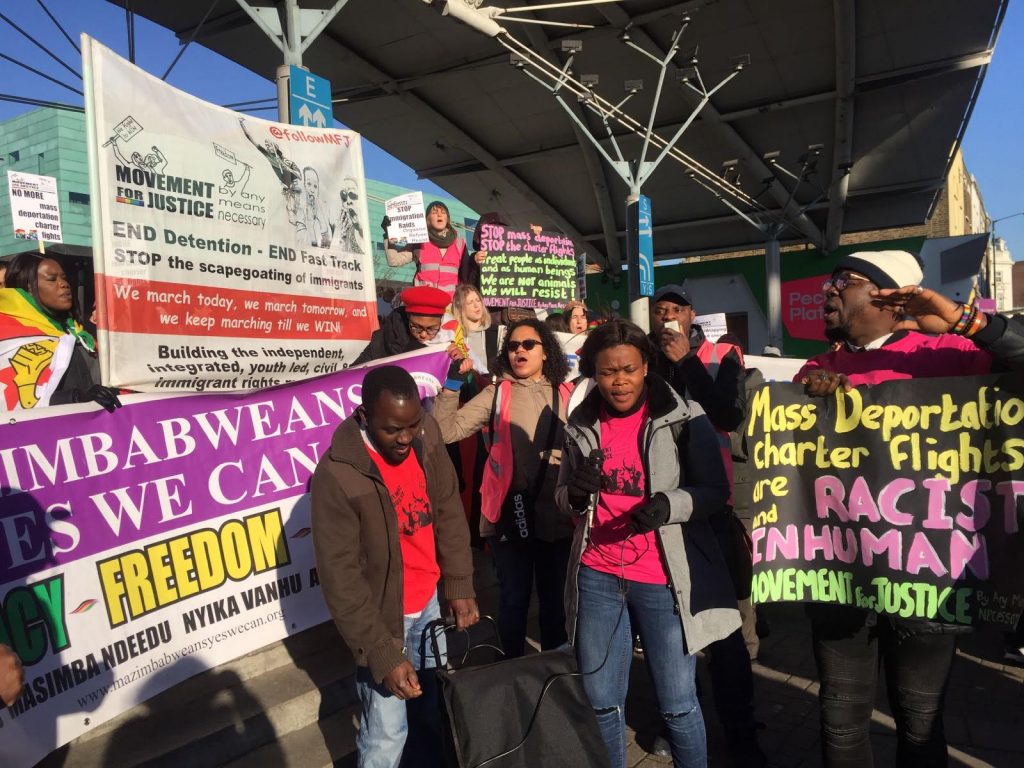 There is also action underground in London, where a subvertising campaign is sweeping the underground tube system. End Deportations has replaced hundreds of adverts with posters raising awareness about mass deportations as part of the weeks of action. As the organisers explain: “When being deported on such a flight, people are being prevented from accessing their legal rights. It is unclear whether Charter Flights are illegal under international law preventing mass collective expulsions. Challenging mass deportations legally has become increasingly difficult in the light of legal aid cuts and a detention system that separates individuals from their communities and forms of support. Each charter flight costs the UK government £250,000 of public money.” 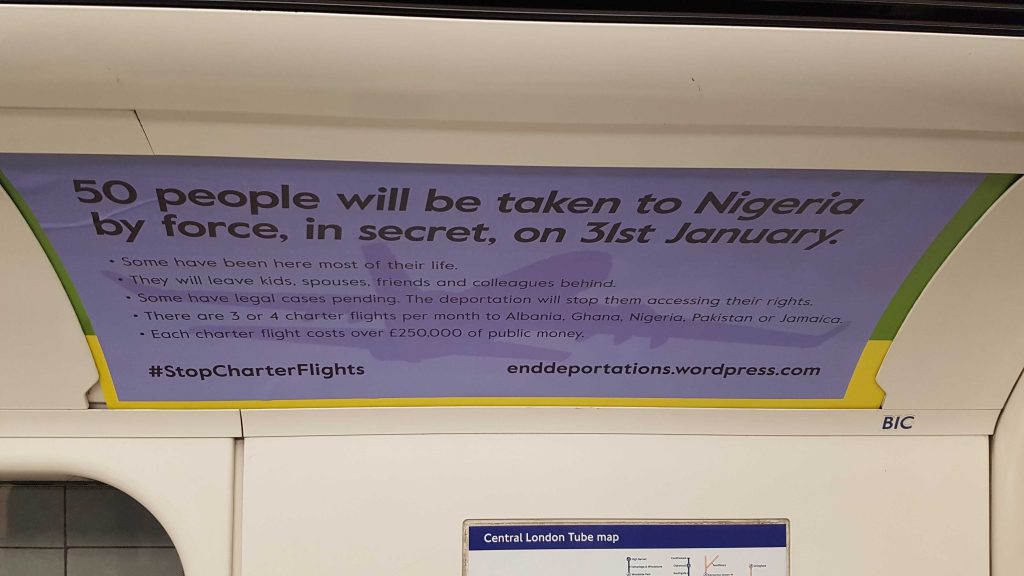 One of the posters displays a quote from an anonymous person, deported on a charter flight in 2016. It finishes: “It is racism. I have been in England 20 years, I paid my taxes, paid my NI. My back is hurt from lifting older people, working with disabled children. I worked with all my heart.” 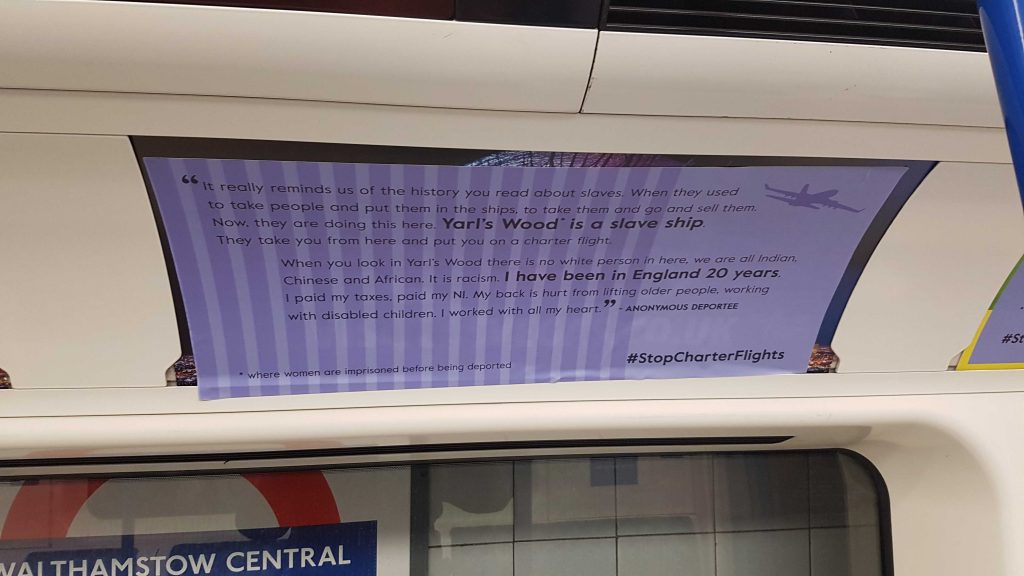 In its coverage of the weeks of action, Al Jazeera also published this quote from Larry, a Nigerian deportee who describes his removal flight:

“There were people shouting. When I walked into the flight I saw a guy that was pretty much naked and he was throwing up on the floor, peeing on himself. He was tied to the chair, he could barely move.  It was inhumane. They were pinning people to the floor, people trying to struggle.”

Like the violence and abuse in immigration detention centres, what unfolds on these charter flights is largely invisible to the public, with the press barred from access. But one rare report from a Jamaican charter flight in 2011 repeated common accounts of escort staff using racist and derogatory language.

Over 30,000 people were forcibly removed by charter flight 2001-2014. Past destinations have included dangerous conflict zones like the Democratic Republic of Congo and Iraq, with Afghanistan now being re-admitted to the list of charter flight destinations along with Albania, Ghana, Nigeria, Pakistan and Jamaica. People are rounded up by nationality, irrespective of any ongoing legal process or the families they are being snatched from, apparently to fill the charter flights and minimise costs. It is this almost pathological obsession with using every space on a flight, along with the use of “restraints too extreme for prison” that has prompted comparisons to the slave ships of the eighteenth century.

Karen Doyle from Movement for Justice, which has played a central role organising demonstrations across London, says: “These two weeks of action have kick started what will be a year of concerted efforts to stop these inhuman charter flights. Marching in our communities, the communities targeted for these flights has been incredibly powerful, Brixton, Peckham, Handsworth; we must keep up this community mobilising to organise the daily resistance that will be needed to stop mass deportations.”

To find out more about charter flight removals, check out Corporate Watch’s fact sheet and these resources below, courtesy of End Deportations:

As well as commercial flights regularly removing people to Nigeria, every 2 months there is a charter flight to Nigeria and Ghana, under “Operation Majestic” as referred to by the Home Office. The contracted airline is Titan Airways.

Between February 2016 and July 2015, there were 3 charter flights to Nigeria/Ghana, 575 removal directions issued, 145 men and 36 women removed. 394 people managed to get off the 3 flights in total. Between January 2016 and March 2016, 78 people were removed to Nigeria on charter flights. The Nigerian High Commission is found to charge £70 per travel document for deportees. So for a charter flight, leaving every other month, they can receive over £3500 from the Home Office for issuing travel documents.
Articles