Claudia Turbet-Delof, Petros Elia and Paul Salgado of the independent union United Voices of the World tell us about how migrant workers at the Daily Mail offices have won a historic victory in the face of threats and retaliation from their bosses. 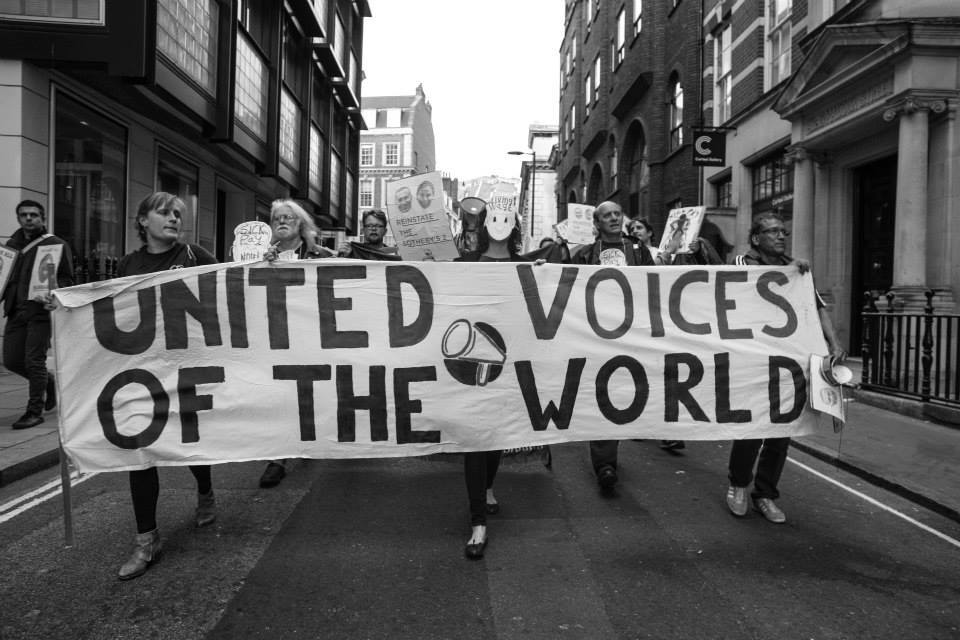 ‘History has shown us time and again the dangers of demonising foreigners and minorities… it is extraordinary and deeply shameful to see these types of tactics being used… simply because racism and xenophobia are so easy to arouse in order to win votes or sell newspapers.’ – United Nations High Commissioner for Human Rights

One of the Daily Mail’s most vicious lines of attack against migrants is that these workers drive down wages – a lie intended to divide working people and undercut our efforts to unite and resist. But it’s not migrant workers who suppress wages – it’s miserly and unscrupulous employers who take advantage of unorganised workers and keep them on the breadline. And now the writers and editors at the Daily Mail need to look no further than their own offices to see their lies exposed.

A group of migrant workers – women and men from Latin America and Africa who clean the plush offices of the newspaper in Kensington – have just united, organised and won a historic victory in the face of threats and retaliation from their bosses.

Proving that the best weapon to fight back is the collective strength of those you work with, the cleaners joined the combative, migrant-led independent union United Voices of the World and threatened an all-out strike to back their demand for a living wage.

As the prospect loomed of a massive campaign uniting precarious and marginalised migrant workers from across London, alongside campaigners for racial justice and those fighting for refugees and against the government’s ‘hostile environment’ for non-UK citizens, the bosses backed down and gave in to the cleaners’ demands.

From the 1st April 2018 the workers will now all receive the London Living Wage of £10.20 per hour – in real terms, a 25% wage increase equating to nearly £500 extra per month per worker, or around £6,000 extra per year. The cleaners – some of whom have been scrubbing and polishing the Mail’s offices for nearly 20 years and are outsourced to Mitie Group Plc, a FTSE 250 company – were previously paid the lowest legally possible – the national minimum wage of £7.50 per hour.

But with this victory, the cleaners, by their own efforts and demonstrating the strength of a union, will lift themselves out of the poverty that the Daily Mail had cruelly constrained them to languish in.

As one of the workers related: ‘This increase in wages is incredible. Now I will be able to pay the bills and even save a little at the end of the month without having to tighten my belt and deprive my family of something they need.’

‘The lesson I’ve learnt is that the union makes us stronger,’ he continued, ‘I strongly encourage all workers in the same situation as us to do what we have done.’ Asked if he had a message to the Daily Mail journalists whose offices and toilets he cleans, he said:

‘Many migrants come to Britain for a reason, they come to work and they work hard. If you don’t work you don’t live, because it is so expensive here. These workers deserve respect and a dignified life.’

The cleaners’ bravery in speaking out also captured the public imagination with more than 100,000 people signing a petition on Change.org, that was written by the worker sunder the pseudonym Juliana, in support of their demands.

The entire campaign was no easy feat for the cleaners, none of whom had been in a trade union before, let alone been on strike. Furthermore, on receipt of the declaration of a trade dispute from their union United Voices of the World, and notice that the cleaners would be balloted for strike action, the contract manager for Mitie stormed in to the Daily Mail’s offices and unlawfully threatened the cleaners, telling them that if they ever went on strike they would immediately be sacked. Winning this wage increase is all the more impressive as just last month the Daily Mail forced through £30,000 worth of cuts to the cleaning contract. This clearly showed that even before the cleaners made their demands, the paper had no intention at all of spending a single penny more on wages.

Perhaps the millionaire editor of the Daily Mail, Paul Dacre, will now reflect on the fact that migrant workers – under his very nose – have fought and won to raise themselves up and defeat a miserly boss, before he sits down to sign off on another anti-migrant headline in an office kept clean by the very people his rag routinely denigrates.

United Voices of the World is an independent, combative community union, led by its members, that actively challenges the precarity, discrimination and marginalisation faced by migrant and all low paid workers in London. UVW members have taken on and defeated big names all over London including, but not limited to, the luxury department store Harrod’s, auction house Sotheby’s, and car dealership HR Owen, City law firm Withers LLP, financial office 100 Wood Street, cultural centres such as the Barbican, retail giants such as TopShop, and prestigious universities such as the London School of Economics.

Our fight have always been led by our members, the types of workers which the union movement has branded as unorganisable. Our victories have come from our determination, our creative direct actions, and our our collective strength in strike action – or merely just the threat of such action.

Keep up to date with all the campaigns and migrant workers fightbacks at
https://www.uvwunion.org.uk/
https://www.facebook.com/pg/uvwunion/posts/

Join our union! Affiliate in solidarity with our migrant worker members and help support organising campaigns amongst precarious and marginalised workers to speak out and challenge racism, poverty wages and inequality.

One comment on “Migrant workers win victory for better wages at the Daily Mail!”