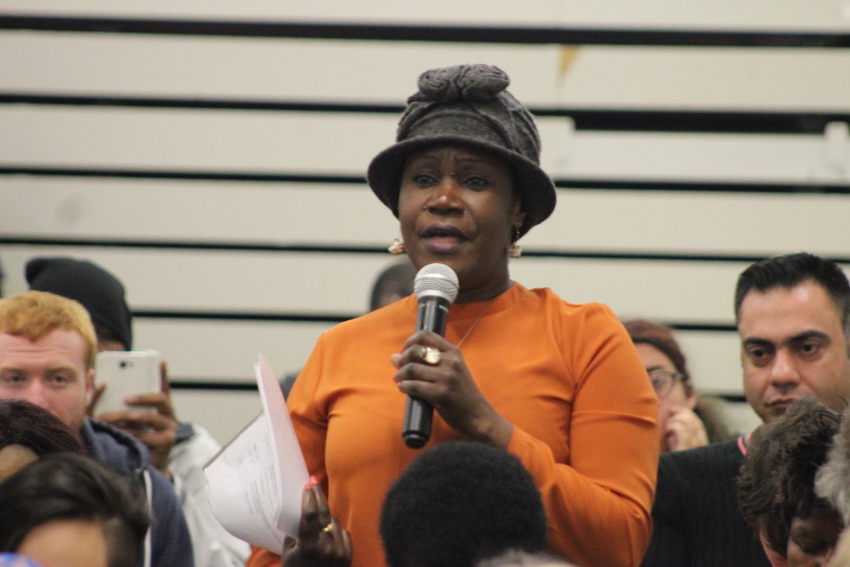 “It always seems to be your annual conference”, one of my friends commented recently as conference-organising anxiety started to spill over in the days leading up to the big event.  This year’s conference – the second as ‘Right to Remain’ but the twentieth as an organisation – was going to be bigger than ever.  And, we hoped, better than ever.

Several people commented about how ‘timely’ the conference was, but it always seems like that.  Migration is always going to be topical.  In the weeks before the event, we thought we would once again have to frame the day by talking about the ‘dark times’ we are living through (which we are) … but the sudden outpouring of solidarity from the British public in support of people seeking a better life meant there was a positive side to current events as well.

Read the story of the day in Tweets!

Together we are stronger

The conference was an opportunity for people to meet, network, learn, share knowledge and skills and information, to meet friends, make friends, build networks, build solidarity.

We welcomed groups and individual activists/supporters who had travelled from all over the UK – Belfast, Glasgow, London, Exeter, Cardiff, Swansea, Newport, Liverpool, Manchester, Leeds, Bradford, Rotherham, Sheffield, Dover, Newcastle, Bristol, Oxford, Malvern, Cheltenham, Slough, Birmingham, Coventry …. and many of our attendees had previously travelled many, many miles to seek sanctuary and security in the UK

First up was a session on ‘what can we learn from and how can we work with other struggles for social justice?’. We heard about the long struggle for LGBT+ equality; workers’ rights, especially the rights of migrant workers in the UK; and the housing movement in London fighting back against unjust government policies and unfair treatment by local councils and landlords.

After hearing abt lessons from LGBTI movement, now hearing from migrant workers rights movement. #RtR2015 Good to look outside our 'sector'

"Gentrification is a form of state-sanctioned violence against often #migrant communities in South #London" – @HousingActionSL at #RtR2015.

CheltFems (who even by attending our conference are a good example of uniting our struggles!) wrote in their blog post about the day:

Living in what’s probably the whitest town in the UK [Cheltenham] I’d never really considered the connections between the struggle to secure affordable housing and immigration raids. Exploring these links and setting them within a broader political context was a revelation to me; the theme throughout the day very much seemed to be to find parallels between different struggles, and to build solidarity between campaigns.

And then we heard from members of the audience – are there other struggles we can link up with? Is this already happening? What echoes are there from past struggles and present ones such as the civil rights movement, Black Lives Matter, the fight for women’s rights? And how we can be stronger as a movement fighting for migrant rights. It was an extremely lively and thought-provoking debate, only halted by an urgent need for lunch!

A solidarity tour of the UK (in one room) 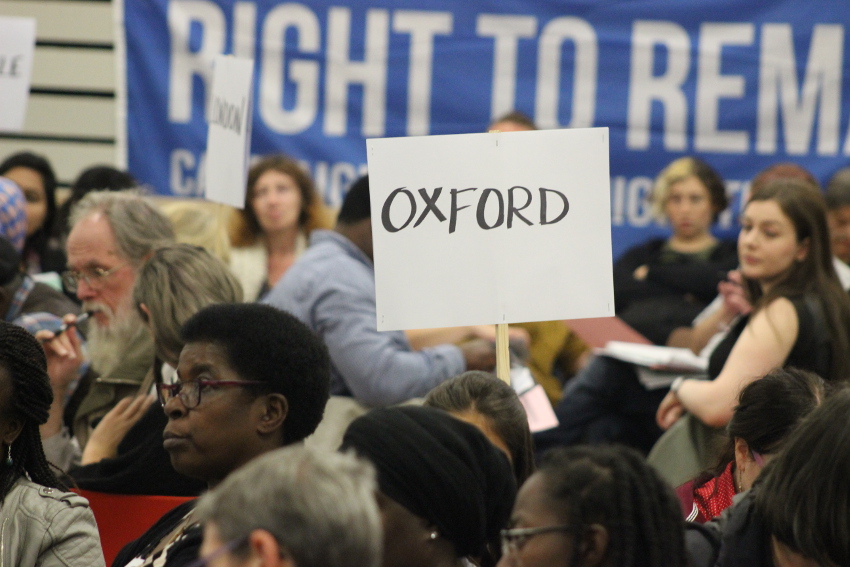 In the afternoon, the conference was organised into geographical locations. Participants from those areas got to meet ‘visitors’ from elsewhere – by using their pretend travel tickets produced for the exercise, the cause of much bemusement at first – and talk about how detention affects their local community, and what is being done to protect and support individuals at risk.

This session explored how detention happens in places where detention centres don’t exist, and reinforced that this is a crucial injustice for all communities to tackle, and for MPs representing those communities to take seriously.  For example, detention operates in many places through Home Office reporting centres, immigration raids on homes and businesses, stop-and-search raids.  People are held under immigration powers in prisons, a kind of ‘hidden’ detention.  There are short-term holding facilities.  Bail hearings are heard at tribunals with otherwise little connection to detention (like Stoke-on-Trent and Newport).  Detention is everywhere.

After the groups had finished their discussions in their allocated geographical location, we did a whistestop tour around the UK to hear what had been shared.

Overwhelmingly, we heard how the risk of detention affects so many communities across the UK – the Manchester group reflected on many people going into hiding through sheer fear – the damage that detention does, and the lack of support once people are released from detention (and over 50% of those detained are released back into the community) often to an entirely new area of the UK.  The Midlands group shared that when someone is detained, it isn’t only them that is affected – “shockwaves go through the community”.

We heard how people seeking the right to remain could be picked up in Newcastle, then taken to Scotland to be detained, and the negative impact this has on their legal case due to their England-based lawyer not being able to operate in Scotland.  We heard of Glasgow residents detained then released on bail to an address in England, where none of their support networks exist and where legal aid provision is far more restricted, particularly for family/private life claims based on Article 8 of the European Convention on Human Rights.

We heard about the challenges of supporting people at risk of detention who live in Belfast, where communities are already starkly divided.  And the barriers to visiting someone detained in the Larne short-term holding facility, as a specific type of ID is required that many refugees do not possess.

Most importantly, we heard what groups are doing to support and protect people at risk of detention, in detention, and after release.

Sharing what folk in #Yorkshire do to support people in detention #RTR2015 pic.twitter.com/uRZGxfy8RC

We heard about the importance of people knowing the risks of being detained, and from the Liverpool group of the need to have an action plan that can be put into place immediately if someone is detained (which only works if ‘signing support’ mechanisms are being used’).

Connections were made between strategies.  For example, the Wales representatives were able to share their experience of successfully campaigning against reporting at a police station with a north-east group who are currently campaigning around reporting centre issues. 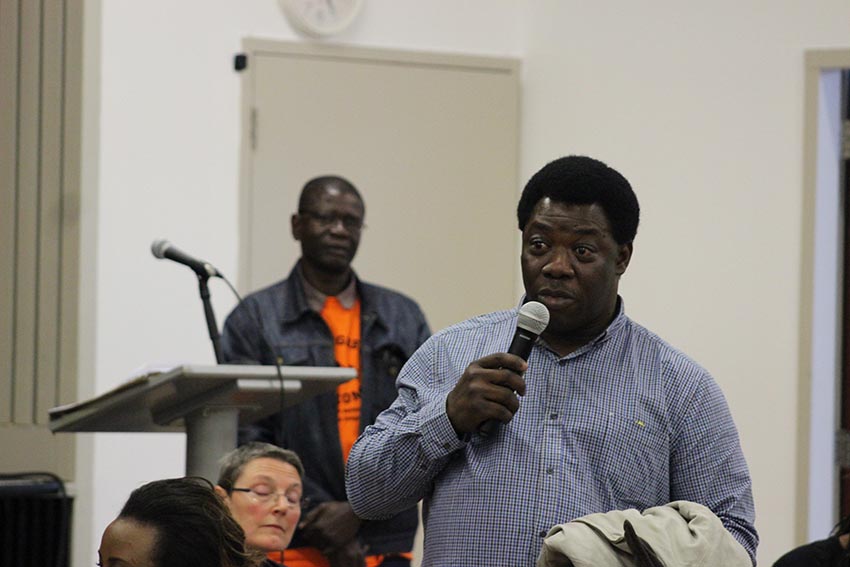 We need changes to the immigration and asylum system – to the operation of the system, and the policies, rules and laws behind it. To do this, we need to persuade the politicians, the MPs who make the laws. This can be approached in various ways.

The approach we looked at in the final session of the conference was building local campaigns. We believe that this approach can be the most organic, dynamic and democratic way to organise, and the most effective in gathering support, and bringing pressure to influence MPs, either directly or indirectly, to make the changes we need.

MPs listen to their local constituents.  Local constituents can persuade MPs to push for positive change.  This is more likely to happen when there is broad, popular, local support for change – demonstrating that it’s truly a priority issue in the local area, and that it’s more than just a minority of directly-affected individuals and concerned activists calling for change.

Attendees got to choose whether to discuss campaigning for LGBT+ issues, women, against detention, destitution and Fortress Europe.

As well as hearing about local strategies to challenge injustice – such as Bristol campaigners asking their local council if they were happy to have homeless children sleeping on the streets, which would be the result of asylum support cuts – the discussions delved into the complex causes of migration, and the UK’s responsibility for these causes.

And as our friend Abraham said, in his wonderful way with words:

You don’t set fire to someone’s house and then tell them not to run.

We felt energised and inspired by everyone’s sharing and thinking and connecting during the day.  Thank you to all those who emailed, tweeted or told us that they had learnt a lot during the day, and were feeling inspired.  Thank you to everyone who travelled from far and wide to make the conference such a success.  We’ll end with the words of our vice-chair, who closed the conference:

I feel motivated by the ideas I’ve heard today … I hope the conference spurs us on.  The tasks ahead will always seem daunting if we see ourselves as individuals, or even as individual groups.  Together we can keep up the fight against social injustice. 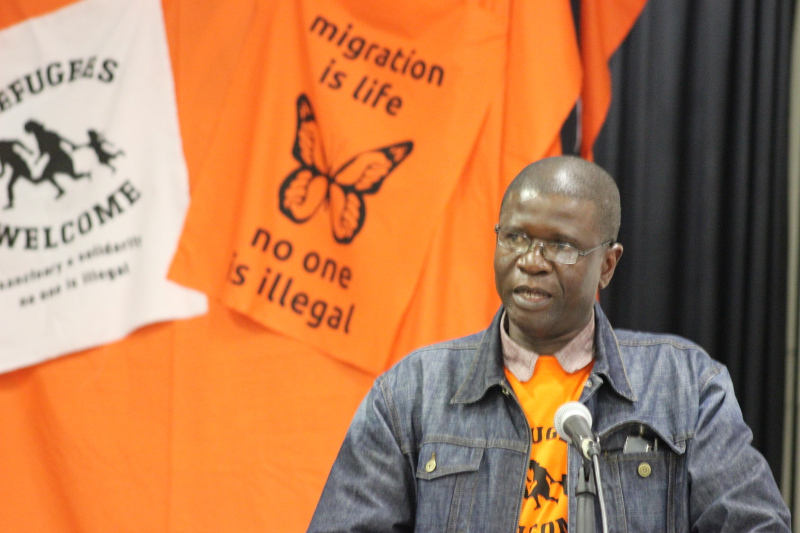