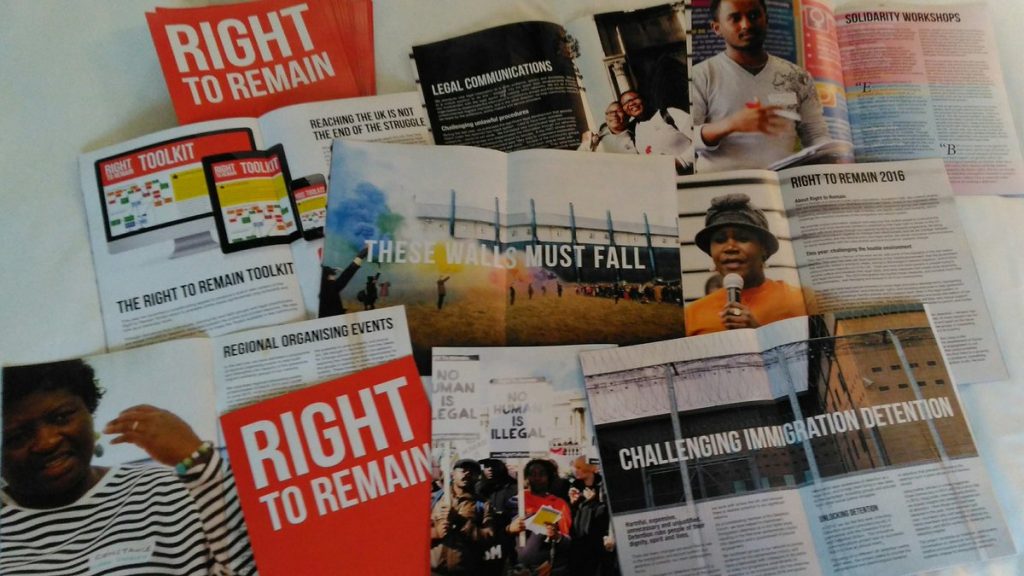 On Saturday 3 September, around 120 people came together at the St Thomas Centre in Manchester for our 2016 annual gathering. Our annual gatherings are made special by the brilliant people in the room, representing extraordinary groups and communities, and this year surpassed expectations.

Relive the day through tweets and pictures

After warm welcoming words from the chair of our Management Committee, Paulette Mengnjo, the tone was set for the day by a powerful opening speech from Justice of the Freed Voices group. Here’s an extract from his speech:

The first time I found out about detention was when the key turned in the cell door.
That was in Harmondsworth, in 2014.
I had been in the UK for two years.
It’s mad to think back to that time when I knew nothing about an experience that would change my life.
An experience that continues to terrorise me today.

And that was me – an asylum seeker, a migrant in this country.
If I didn’t know anything about detention, what were the chances the British public did?

I remember the first time I spoke out about detention as a Freed Voices member after I was released.
Jaws dropped.
I could hear the shock in the silence.
Eyes popped out like cartoons.

But its funny, because when I speak-out about detention now, I get a different reaction.
Of course, there are still many people that don’t know enough.
People are still stunned…but you also get the feeling the word is out.

Detention is getting more media and political coverage than ever before.
It is no longer a fringe issue.
This year, detention went mainstream.

After that powerful start, we invited everyone to reflect on progress made in the last year and challenges that lie ahead, in the fight for migration justice. Some people had already shared their thoughts on this, which we published in a blog post in advance of the gathering.

We talked about the progress made in the anti-detention movement, including the introduction for the first time of a time-limit on the detention of pregnant women, and automatic judicial oversight for some people in detention for more than four months. We celebrated once again the succession of defeats of the Detained Fast-Track system, and we spoke of the growing popular movement against detention – including bigger and bigger demonstrations at the sites of detention. We are heartened by the mass mobilisation of the Refugees Welcome movement, and by the solidarity shown in so many ways to people in the camps of Calais, Dunkirk, and across Europe. We highlighted resistance to immigration raids, innovative campaigns such as the #Stop35k campaign, and the inspiring Black Lives Matter movement that is laying bare the racism of border controls.

We didn’t gloss over the negatives, however. We are facing very tough times ahead. We spoke of the scant legal aid available, meaning so many people are unable to exercise their legal rights. We of course mentioned the 2016 Immigration Act, that deepens and worsens the “Hostile Environment” and contains some truly dystopian elements. And as well as reflecting on state violence, the increase in racist and xenophobic attacks in the streets was very much at the forefront of people’s minds.

One person shared their personal experience of this post-Brexit-vote racism. While in a bank, a man verbally abused her, saying he’d “voted for people like you to go home”. This person said that she felt confident enough to respond, drawing on the strength she gets from the support of a fantastic local migrant support group. “I think you’ll find you voted to exit the European Union, not Pakistan”, was her brilliant reposte.

Another person shared their optimism – that in response to these outbreaks of overt racism and xenophobia, there was a groundswell of people countering this racism, and that those of us countering it are in the majority. This point felt particularly appropriate given the number of #MoreInCommon events being organised by Hope Not Hate that very weekend.

After this opening session, we did some speed networking so that the diverse representatives in the room could get to meet each other before lunch!

After lunch, the gathering moved into break-out sessions. There were five different workshops, which were then repeated so that people had chance to attend two different sessions.

These Walls Must Fall: Michael Collins of Right to Remain ran a workshop on building community campaigns against detention, mobilising people in the communities where people are taken to detention from. This workshop focused specifically on campaigning in Greater Manchester and Liverpool, where Right to Remain will be working with local communities for the next 18 months.

#UnisResistBorderControls: A workshop on the situation of international students within the immigration system, and surveillance in our everyday lives. With Sanaz Raji and Luqman Onikosi. Find out more about this session in a brand new blog post coming this week!

Practical solidarity from Calais to UK: Linking up the know-you-rights workshops of the Calais Refugee InfoBus with solidarity groups in Britain in the asylum legal system. Find out more about this session in a brand new blog post coming this week!

Theatre of the Oppressed: A workshop with Pinar Aksu of Right to Remain’s Management Committee, on using forum theatre as a catalyst to uncover and challenge injustice.

After an intense couple of hours of workshops, the gathering came together for one final session to share what had been learnt and to plan for the future. One of the final contributions was from the ever-brilliant Abraham, from Sunderland Friends of the Drop-In and Beyond Borders Tyneside (and many other groups beside!).

Abraham shared his own good news of being awarded a scholarship to study at Bradford University, thanks to the Helena Kennedy Foundation Article 26 organisation, and then went on to remind us of the importance of recognising the victories we achieve on the long road to justice. Groups in the north-east who were campaigning against the moving of their local Home Office reporting centre to Middlesbrough were put in touch with Bristol groups by Right to Remain, as they already had experience of campaigning on the same issue. Although the north-east group were unable to stop the move taking place, they did manage to secure much longer periods between reporting dates for those having to travel to Middlesbrough. We may not always achieve the goal we set ut to achieve, but what we learn and achieve on the way can be immensely valuable. 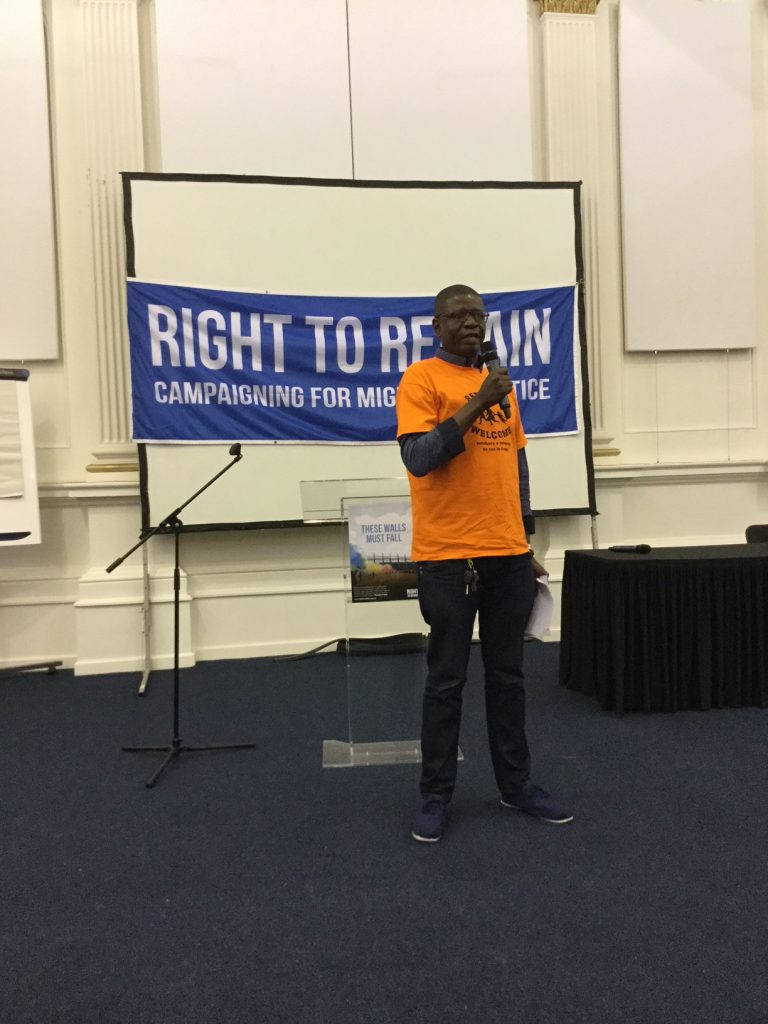 The day was drawn to a close by our inimitable vice-chair, Panyika Anselm Karimanzira, who spoke powerfully of the importance of working together, of the power of groups and communities, and the strength of solidarity. He said that Right to Remain was looking forward to working with all those in attendance throughout the year, until our next annual gathering (with a cheeky demand from the floor that the next one be in Newcastle!). Panyika reminded us all that our work can only continue if the organisation has the funds to keep fighting the good fight, and encouraged everyone who could to support our work through regular giving or donations (more info here!)

Thank you to everyone who came and contributed to the day. It really did feel like, as one attendee put it, “a breath of fresh air”, invigorating us for the challenges ahead.

Great to be part of @Right_to_Remain meeting on Saturday in Manchester: exchanging new ideas, building on past ones, making plans for change

Great to be part of #RtR16 today. Honoured to represent @symaag with@_arashkamangir in such passionate, intelligent and determined company