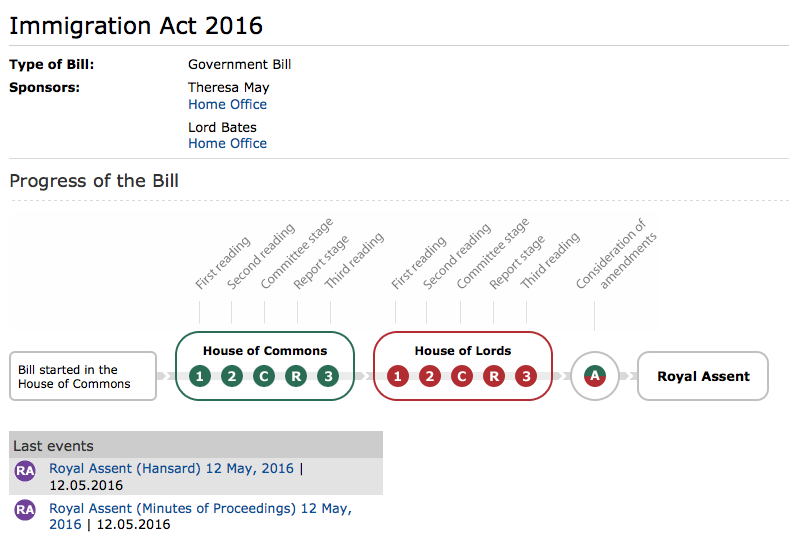 In those words, a great deal is bound up.

As we have written previously, the Act involves a hardening and an extending of the measures designed to create a ‘Hostile Environment ‘ for migrants brought in by 2014 Immigration Act, including:

The “deport now, appeal later” provisions are  to far more immigration categories (“remove now, appeal later”), meaning even fewer people would have the right to appeal a negative immigration decision in the UK. The idea that people can simply appeal from the country they have been removed to, or have chosen to depart to, is not borne out by the facts and immigration statistics consistently show alarming levels of poor Home Office decision-making. Appeals are a vital part of accessing justice. With appeal rights removed, more people are forced to resort to judicial review, a very complicated area of law and with increasingly restricted legal aid coverage.

The right of appeal against decisions to refuse or discontinue asylum support has been removed, meaning many more people will be driven into destitution, a policy that has been admitted by government to be a deliberate attempt to force people out of the UK.

Banks and building societies will be turned into border guards, required to periodically check the immigration status of account holders.

People with precarious immigration status will find it harder to rent accomodation. Landlords will now be enabled to evict people whose immigration status means that they have ‘no right to rent’. This is under controversial rules that have already shown an increase in discrimination against those who do have the right to rent but don’t have the ‘right’ coloured skin or accent.

The Act introduces new criminal offences for people working illegally,  for driving whilst not legally resident in the UK, and creates a new criminal offence, with a maximum five year prison sentence, for landlords and “who know or have reasonable grounds to believe that their property is occupied by a person who does not have the ‘right to rent’”.

Opposition in Parliament and beyond

The Bill did receive more opposition than the similarly racist and divisive 2014 Immigration Act.  In the third reading of the Bill in the House of Commons, it passed by 307 votes to 245.  Despite this large vote against, it rarely seemed in doubt that the Bill would come into law, despite the condemnation of human rights campaigners and, well, most people with a conscience/common sense.

We must now begin to reflect on why that is so.  There are several factors that have struck me as the Immigration Bill has made it’s way through its many confusing stages.

Could the Bill have been stopped?

Firstly, there was a degree of pragmatic acceptance that the Bill was very likely to become law, and so energies were focused on diluting the toxic effect of it.   Whilst the SNP made it clear that, as it stood, they would not accept the Bill, and many other MPs spoke against it, it would have required a big political shift away from dog-whistle politics to stop the Bill going through altogether.  A big shift, but not an impossible one.  It would require a great deal of collaborative work (and therefore compromise) for human rights and migrant rights NGOs to stand together with community campaigners and individual activists to put enough pressure on for a majority of MPs to oppose the Bill.  Another Immigration Bill cannot be far away, however, as this government seems to want to introduce a new one every year, so there is an urgent need to consider this cooperative approach for our next battle.

An important point for reflection is that, if this unrelenting erosion of civil liberties, dignity and humanity, is being introduced to pacify anti-immigrant voters (or at least voters who have been convinced they are ‘anti-immigrant’), is it actually working?  As we have so often said about the policy of immigration detention – does the government lock people up in prison-like conditions to look ‘tough’ on immigration? The reality of detention is so unknown to the vast majority of the public that it doesn’t seem a very efficient approach.

If this immigration legislation is so popular why are its supporters not dancing in street, or, err, reporting it? https://t.co/6C33Zo1AX9

The Bill contained so much that was toxic, that the resources of those opposing it were further diluted as each interest-group attempted to brief MPs and peers on their key issue, and propose amendments to lessen the blow of the Bill.  Many areas affected by this Bill (now Act) are highly technical or legalistic, and there are very few MPs or peers who could be expected to know enough about a particular specialist area to speak against it, and therefore campaigners and NGOs brief and lobby those MPs and peers but by necessity this means that attention is then on individual clauses of the Bill, rather than the overall impact it will have on us, as a society.

At Right to Remain, we were part of this lobbying, mainly through the Detention Forum.  As well as supporting the Alf Dubs amendment to bring 3,000 lone child refugees from Europe to the UK, and the right to work for asylum seekers, we asked supporters to encourage their MPs to back the detention-related amendments. We agreed that there was no way that this Bill would be stopped, so we joined in campaigning to support amendments, even if they fell way short of the changes we would like to see.

Detention should be abolished, not just reformed, but at least we saw some (unexpected) progress.

As has been written elsewhere, this Immigration Bill was never supposed to be about detention.  And yet, much of the parliamentary debate was dominated by this grave civil rights issue.  The Bill, as written by the government, barely mentioned immigration detention, and yet the amendments targetting detention were among those that were debated until the bitter end.

Thanks to the tenacity of supportive MPs and peers, encouraged by the groundswell of popular opposition to detention, there were two important concessions wrung out of this process.

1: for the first time ever, there is now legislation that requires automatic judicial oversight of immigration detention.

The amendment that was finally passed to introduce this scrutiny requires an automatic bail hearing after four months of detention, if the person has not applied for bail themselves within that time.

Notwithstanding our position that there should be no use of immigration detention whatsoever, this amendment clearly does not go far enough.  The people most likely to be in need of automatic judicial oversight (unable to apply for bail themselves), will be those with complex needs, who should not be detained in the first-place.  Four months is an unconscionable length of time to detain anyone.  Further more, people facing deportation after serving a criminal sentence are not included within this protection, despite being the group of people detained for the longest periods.

Lords Ramsbotham and Baroness Hamwee fought tirelessly to reduce the period of time before automatic judicial oversight is brought in, and made moving speeches in the final House of Lords debate on Tuesday.

2: There is now a 72 hour time limit on the detention of pregnant women (subject to extension by ministerial approval).

As the Detention Forum’s statement on the Bill says:

On the surface, this new policy for pregnant women is an extension of a safeguarding time limit currently available for families with children who are facing return to their country of origin.  However, it is unclear how this is going to be achieved without a mechanism equivalent to the Independent Family Returns Panel which has been playing a vital part in restricting the number of families with children who are detained at Cedar Pre-Departure Accommodation.

Whilst it is depressing not to be able to convince parliament of what would seem such a basic demand – an absolute ban on the detention of pregnant women – this is still a significant step forward, thanks to the work of Women for Refugee Women and the many campaigners who have kept up the pressure for this demand.

These two detention reforms required vast amounts of effort, good will, patience and diplomacy to achieve, and their significance should not be understated.

However, the fight is far from over.  These amendments are a long way from the radical reform of detention called for by the cross-party parliamentary inquiry into detention, and even further from the abolition of immigration detention can be won.

#ImmigrationBill process has seemed both rushed and also endless. A terrifying Bill (now to become an Act) with big opportunities for reform

When the Immigration Act comes into force, many people’s lives will be a lot worse, and we need to evidence this, challenge it, and work to overturn these measures.

For now, it’s time to recharge and reflect, celebrate what has been achieved and yet mourn what has been lost.  We’ve got a long road ahead of us.