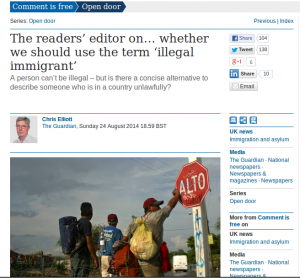 Right to Remain recently wrote to The Guardian newspaper to complain at its persistent use of the phrase “illegal immigrants”.  The letter was also signed by Migrant Voice, JCWI, MRN, Just West Yorkshire, MAX and ILPA.

This weekend, the readers’ editor Chris Elliott has questioned the paper’s use of the term, referring to our letter:

The use of “illegal immigrant” is a term human rights activists would like to see ended, as in this example in the Guardian in a story published on 30 July, headlined “David Cameron criticised for PR stunt in home of suspected illegal immigrants”. One paragraph read: “The government has previously been criticised for sending out vans with billboards telling illegal immigrants to ‘go home or face arrest’. The pilot project, which resulted in 11 people leaving Britain, was not extended.”

Following that story, Lisa Matthews, the coordinator of Right to Remain, wrote to the Guardian expressing her concern about the use of the term:

“As human rights organisations working to support migrants (including undocumented migrants whose right to stay in the UK has not yet been formally established), we are troubled by the paper’s persistent use of this phrase.  The term ‘illegal immigrant’ is inaccurate and dangerous. Even in the case of someone deemed to have committed an immigration offence by not having the correct papers, the person themselves is not ‘illegal’.

It is also a dehumanising phrase, treating all undocumented migrants as a homogenised mass instead of the reality: individuals with unique experiences and stories to tell, who have not had their right to be in the UK recognised, usually due to legal and bureaucratic barriers, and the government’s increasing criminalisation of migration. The United Nations and the European parliament have called for an end to using the term, promoting the use of ‘undocumented’ or ‘irregular’ migrants instead.”

The Guardian is now considering the alternatives to this inaccurate and harmful phrase.  PICUM suggests ‘undocumented’ or ‘irregular’, others have suggested ‘precarious’.

Encourage the Guardian to drop the phrase “illegal immigrants” and feed into their discussion about alternatives by emailing the readers’ editor at reader@theguardian.com