On a beautifully sunny day in South Wales last week, we held an event with Swansea City of Sanctuary on the dark topic of immigration detention.

Detention is one of the most harmful aspects of the UK’s asylum and immigration system. Over 30,000 people are detained without time-limit every year, in conditions tantamount to high-security prison settings. Tens of thousands more people live with the threat of detention constantly hanging over them. The harm of detention doesn’t end with release – the people we work with describe the long-term physical, mental, and social damage done by this inhumane and unjust policy.

.@Right_to_Remain explain why they campaign on detention: because its most extreme form of violence vs migrants in UK today #Time4aTimeLimit

The asylum and migrant groups in Right to Remain’s network across the UK tell us that detention damages their members, and damages the groups themselves – the looming threat of detention impairs people’s ability to take part in the group, and when a member of the group is detained, the shock reverberates through the group, making it difficult for them to keep going and organise effectively.

Detention is a barrier to justice, preventing people from establishing their legal rights. Immigration and asylum legal cases are very complex – and are often a matter of life or death – but people in detention are frequently unable to secure good quality and timely legal advice. People are cut off from their lawyers, from their families, from their communities and support networks.

We started the event by showing 1000 Voices, this powerful and moving short animation about detention, below. Although it was made a few years ago, sadly little has changed – there is still no time-limit on detention and the UK still detains people who have left their home countries because of war, insecurity or inequality that is often a direct result of the UK’s international actions (past and present).  It can be difficult at times to make out the audio in the film, which is a very appropriate representation of the isolation and barriers to communication that people in detention experience.

“I started to feel at home”

Our first guest speaker was William, from the Freed Voices group , a collective of experts-by-experience who have lost over 20 years between them to immigration detention in the UK.

William described how he was detained on his very first day in the UK.  William also wrote about this experience in an incredible blog post for last year’s Unlocking Detention ‘virtual tour’ of the UK’s detention estate (coming again soon this October), which you can read here.

Here is an excerpt from William’s brilliant speech:

I came here for refuge, protection.
What I got were 20ft walls, a prison cell, and no end in sight.

It is really hard to explain the impact of indefinite detention…
Every day it feels like you are carrying a huge load on your mind.
I was taken to detention with lots of stress already in my head.
Everything there reminded of my experiences back in my home country and I was very scared.

The UK is the only country in Europe with no time-limit on detention.
And not knowing when I would get my freedom back multiplied this mental pressure.
I couldn’t concentrate on anything.
Sometimes I didn’t even realise whether I was asleep or awake – everything just blurred into one.
I felt alone, caged, powerless.

William very powerfully described the terrible experience of detention, and laid bare the utter pointlessness of the policy.  But what I found most moving was his description of feeling part of the community in his new home, Cardiff.

Lots of different people there helped me get back on my feet.
I found the community warm and friendly.
I was treated like a human – something I had not experienced in the UK up until this point.

One year later, and I was supporting Wales like crazy in the Euros.
I felt like ‘I am Welsh now!’
I was jumping around with everyone.
I said to myself: ‘I feel one of these people’.

I realise now that this is specifically what detention is designed to stop.
Detention is about division.
It is about separating us.

Here, I feel William has hit the nail on the head.  For these walls to fall, it is this division and separation we must counter.  Communities can stand together and say no to detention, and yes to people living with dignity and humanity in the community.

(1/2) William from #FreedVoices: "If you lock up 32000 people in cages&treat them like animals&paint them in the press as dangerous monsters

…is it surprising to find anti-migrant feeling on the streets? I don't think so." @Right_to_Remain @swanseaCoS https://t.co/QHEH7XSWij

There are no long-term detention centres in Wales, but that does not mean Wales is free from detention. Detention affects us all, and the operation of this affront to civil liberties takes place in communities across the UK, through raids on homes, businesses, places of worship, stopping people in the street, or at bus stations, or even at wedding ceremonies.

We heard from Eleri of Swansea City of Sanctuary:

“I’m very grateful Wales doesn’t have a detention centre … but this doesn’t mean people aren’t at risk or affected by detention”.

Eleri described the very real ways in which detention had affected people in their community, and the opportunities for Wales to say “We are a nation against detention”.  She reminded us that in this time of political flux, there are possibilities for communities, the grassroots to create change – there is a “window of hope”.

Eleri @swanseaCoS: "Detention damages individuals but it also sends shockwaves through communities. It impacts us all." @Right_to_Remain

Eleri from @swanseaCoS stresses the opportunities for #DetentionReform – now is time for communties to act!! pic.twitter.com/HEeBUoUzb3

We then heard from Sophie Muller from Pembrokeshire, who is just one of those people being affected by detention while not at risk of detention herself. Sophie has been looking after a young Afghan man, Hamed, who has been living with her since he arrived in the UK to seek sanctuary. He has become very much a part of her family, and her young children adore him. Suddenly, Hamed was snatched away and detained:

“Suddenly he was taken”

Sophie discovered all too well the horrors of immigration detention – the way it can destroy mental health, the way it cuts people off from their family, friends and communities, and vital support networks. The way it obstructs access to justice. The sheer inhumanity and brutality.

Our final speaker was Tom from Hope Not Hate Wales, who spoke of the momentum building against detention, of it becoming more visible, more exposed, and possibilities for Wales to make change happen.

We then had (too short) time for discussion with the attendees, and it was clear that there is real commitment and passion to tackle detention.  A crucial question was raised of how, when groups and individuals are struggling with time, resources and overwhelming need providing practical solidarity to people at risk of detention, in detention, or recovering from detention, how can they manage to challenge the very system that is causing that harm as well?  This question is fundamental to our work, and we look forward to helping create possible solutions to this.

We need action, but we also need actors.  And if people don’t know about this injustice, they will not know to act. As Tom of Hope Not Hate Wales said, of his own journey into activism:

“When you see the reality, you either do something or you don’t”

One of my highlights of the night was when one of the attendees came up to me and said “I’m a social worker, and I knew nothing about this. I didn’t know about detention”. Under her arm, she clutched one of our posters which she was going to put up in her office the next day. 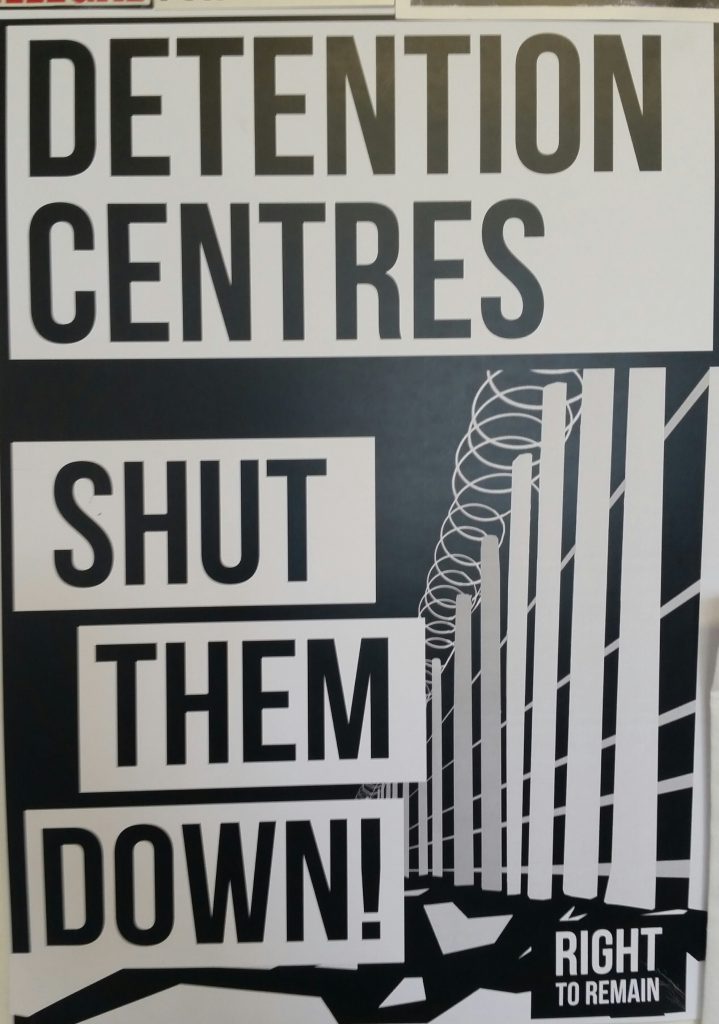