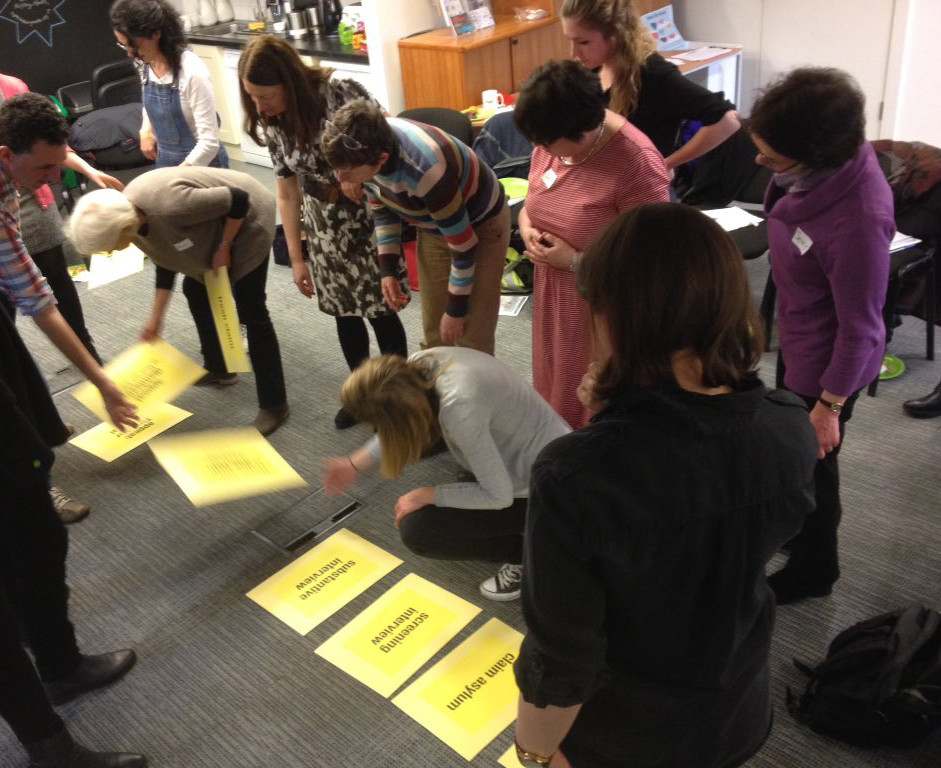 We recently ran two training sessions hosted by René Cassin – on the UK asylum system, the barriers people face in establishing their legal rights, the harm the system can do to people, and practical acts of solidarity that can help people through the process.

A lot of our recent workshops have been for people who are new to this – who have been inspired by what they’ve seen, read, or heard about the people trying to reach safety and security in Europe.  We’ve often been the bearer of bad news – that if people have survived the perilous journeys across the Mediterranean, have survived the terrible conditions in Calais and Dunkirk, and make it to the UK, the struggle isn’t over.

Many people have got in touch with us who are part of the Refugees Welcome movement.  As well as wanting to show support and welcome for Syrian refugees who are being resettled to the UK, they want to help others too. And this is where we come in, providing information, resources and training on the reality of the UK asylum and immigration system and the huge obstacles people face in securing their right to remain.

We are aware that these grim realities can seem overwhelming to people – to those who are just starting to get involved, but also to veteran activists.  There are so many barriers, problems, outrages and the last thing we want is for people to be distressed, depressed and feeling helpless.  So we make sure that a major focus of our work is encouraging and enabling people to get stuck in, to take practical actions to support asylum-seekers and other undocumented migrants, and to be part of campaigning for migration justice.

Some of these sentiments were clearly felt by those who attended the training.  Participants said, “All really valuable and at the same time eye-opening and horrifying”, “very valuable – though shocking and overwhelming, it was also practical and helpful” and, perhaps most importantly, “It has motivated me into action”.  We don’t want to just raise awareness so that more people know how horrible things are – we share information for action, so that there is an improved situation as a result. 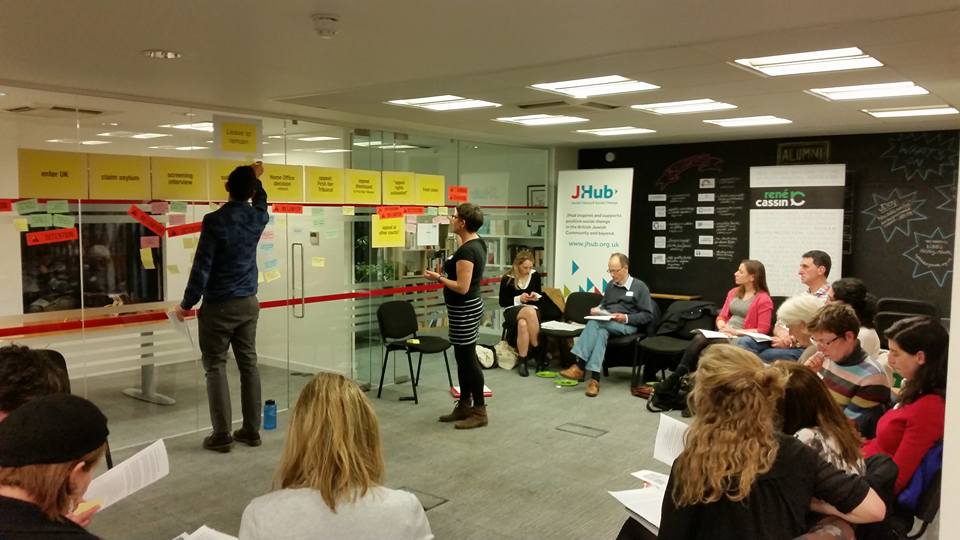 One of the training participants, Catrin, kindly wrote a short piece about her experience of the workshops.  Catrin Atkins is MA student studying ‘Postcolonial Culture and Global Policy’ at Goldsmiths university of London:

I decided to take part in this asylum workshop, as I am currently undertaking a research project into the detention system in the UK for my Masters course. As such, I came along with the hope of widening my understanding of the immigration system in general and I was not disappointed. In two three-hour workshops, a group of 20 of us from various different occupations, were taken through a rapid tour of the asylum application process in the UK.

The first session was based around a general introduction to the system. In the first five minutes, whilst discussing stage one – entering the UK – we learnt that the asylum seeker may already be liable to face prosecution, for example because they used a false passport, or could be indefinitely detained. (Currently, the UK is the only country in the EU which adheres to a policy of no time limit on detention.) However, it was the screening interview and substantive interview which took up the majority of the discussion.

Here, we were made aware that there is a culture of a presumption of guilt which overshadows the UK system, where any discrepancies in recalling events could brand the asylum seeker as a liar. We learnt that factors such as accounts being lost in translation, culturally as well as linguistically, having a hostile interrogator or a blurred memory because of trauma, are rarely taken into consideration.

In the second session, which was based on the interests of the group, we discussed the detention system in the UK, reviewing when, how and whom could be detained.

The answer, it seemed, could be nearly anyone, anywhere.  Although exceptions do exist, for example unaccompanied minors, paradoxically the system retains the ability to enforce special circumstances to override such exceptions.

The second half of the session continued with an interactive discussion about fresh claims applications. Looking at cases, for example, where an asylum seeker had fled because of their sexuality or where a women now had a child born in the UK with a British partner, we were encouraged to think about what evidence they could use to kick-start a fresh asylum application.

For me, it is this policy of destitution which is the most shocking and inhumane aspect of the UK immigration system, as it enables the government to legally deprive asylum seekers of their fundamental human rights.   The UK has no limit on the number of asylum seekers which it can take in. However, it is the endurance of a policy of destitution entangled with a culture of a presumption of guilt which permits the government to decide which applicants have the right to remain and which who do not.

I believe that education is a vital aspect of advocacy, and this workshop was very much aimed at encouraging us to think about ways in which we, as individuals, could make a difference on the front-line. Whether that be helping an asylum seeker understand their rights at a local walk-in centre, or holding our own workshops to pass on basic information about the UK asylum and immigration process.

Both sessions made me recognise the importance of this type of action, as even a small amount of emotional and legal support can greatly reduce the psychological hardship an asylum seeker faces and reduce their chances of being unfairly treated by the Home Office. For me, personally, the workshop managed to translate a complex, pessimistic subject into a comprehensible platform for making a difference. For example, through this workshop, I have now been given the opportunity to  join René Cassin’s campaign group to continue advocating for reform of the UK’s immigration law, particularly for a time limit on detention.

Thank you very much to Sam from René Cassin, and Michael and Lisa from Right to Remain for organising and running the workshops!