This is a guest blog post by Sanaz Raji, who will be co-running a workshop on this topic at our annual gathering on Saturday. 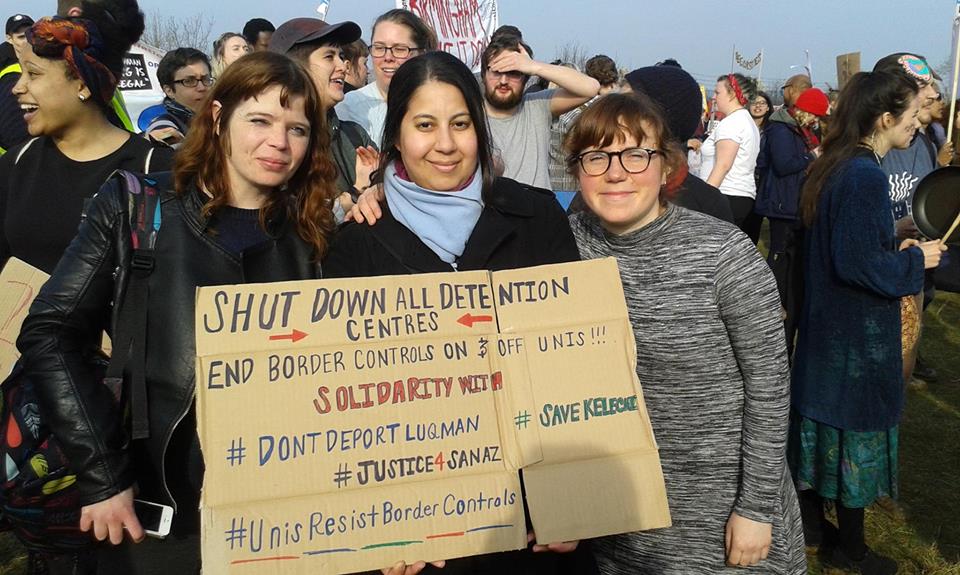 Five months ago, the Justice4Sanaz campaign launched the #UnisResistBorderControls campaign at SOAS. This urgent campaign brings together grassroots activists and campaigners to oppose widespread abuses against non-EU international students and staff within the British higher education system and by UK Visa and Immigration (UKVI).

In the over three years since the Justice4Sanaz campaign was established, I have worked tirelessly campaigning against the racist and xenophobic discrimination I have experienced while as a PhD student at the University of Leeds. At the same time I have also campaigned against the way British universities collude with the Home Office and UKVI to effectively act as border control on campus. This collusion is creating a situation where bureaucratic surveillance is being used to victimise non-EU international students who have experienced unfair dismissals as a result of racism, ableism, and misogyny, thereby preventing them from seeking recourse to justice.

Recently, Marina Burka wrote a piece for the Right to Remain blog which explored the covert manner in which immigration surveillance operates within UK universities and colleges. Sometimes the covert manner in which universities operate UKVI surveillance becomes public, as in the case of the SOAS Justice for Cleaners, when in June 2009, SOAS management colluded with UKVI to detain and later forcibly remove 9 cleaners who were fighting for a living wage. Burka’s research corroborates what the Justice4Sanaz campaign has said over the years, such as in 2013 when I was interviewed by Just West Yorkshire and stated:

We saw what happened to the students at London Met University and London Film School; we see it now with the fingerprinting of students at Sunderland University, and the University of Ulster. International students are made to feel like criminals. You’re made to feel like you’re not allowed to access the same resources home students have. I think with the rampant xenophobia you see, we’ve seen the Home Office Racist vans over the summer, and what we now see with the fingerprinting of international students – I think unless we all fight collectively and with as much vigour and strength as we can it’s going to get a lot worse.

Unfortunately, the demonisation of non-EU international students is getting worse. In 2014, the Justice4Sanaz campaign documented the exploitation of non-EU students and lecturers in a statement published in Ceasefire Magazine. In that statement, which was endorsed by over 100 academics and activists, we implored British universities “to speak out and take the lead as professionals and intellectuals against turning the country’s higher education institutions into a racist money-making endeavour, destroying the spirit and integrity of the very idea of knowledge and learning.” As the Docs Not Cops campaign has stated, the Conservative government has created a “panopticon in which we all police each other”, especially evident in the recent NHS surcharge that requires non-EU migrants, including non-EU international students to pay over £200 to access the NHS. Similarly, since 2015 landlords are now required to check non-EU migrants’, including international students’ visa status before agreeing to lease a property.

Although student activists are aware of the growing state-imposed racism and xenophobia against refugees, asylum seekers and non-EU international students, there has been little done to provide support, advice and advocacy for migrant students, lecturers, and university workers. Despite the fact that in 2014, the National Union of Students (NUS) Black Students Campaign (BSC) passed motion 102, titled, “Black International Students”, resolving to support Black international students, by creating a “know your legal rights” workshop, and to campaign to “eliminate discrimination from any attendance monitoring practices”, we precarious international students have yet to see this put into effect, in addition to any real, concrete support which meets our specific needs.

In response to this, on the 5th of March this year, #UnisResistBorderControls had our first meeting. We were joined by representatives from Movement for Justice By Any Means Necessary, SOAS Justice for Cleaners, Fighting Against Casualisation in Education (FACE), #DontDeportLuqman campaign, and the Save Kelechi campaign, along with a barrister specialising in immigration law from Garden Court Chambers, Ms Bryony Poynor, who discussed the changing landscape of immigration laws and policy at length. A write up of the meeting can be accessed here.

Three weeks after our meeting, we wrote a statement that was published on Media Diversified and endorsed by over 40 academics and activists, stating:

#UnisResistBorderControls is involved in a variety of projects designed to spread information and to help advocate and support the needs of international students. We will soon be publishing a zine with articles and testimonies from non-EU international students, academics, and university workers outlining their experiences within an increasingly xenophobic British higher education system and UKVI. A “know your legal rights” section covering different topics (housing, health, welfare, discrimination, etc.) will be included in the zine. We are also launching a trailer and crowdfunder for a full length documentary that we are currently working on called, In Limbo For Justice, a documentary that will follow the stories of non-EU and EU international students, anti-racist, migrant rights and anti-austerity activists, along with scholars who are bravely speaking out against how higher education is being used by the Tory government to enforce a pernicious and toxic mix of fear, racism, and xenophobia against international students, asylum seekers, and refugees inside the walls of the Ivory Towers.

We welcome you to attend our workshop at the Right to Remain conference this coming Saturday in Manchester. Luqman and I will be discussing not only our own respective campaigns, but how we as non-EU international students, free education, anti-austerity, and migrant rights activists can work together to safeguard and protect those most vulnerable within higher education today.