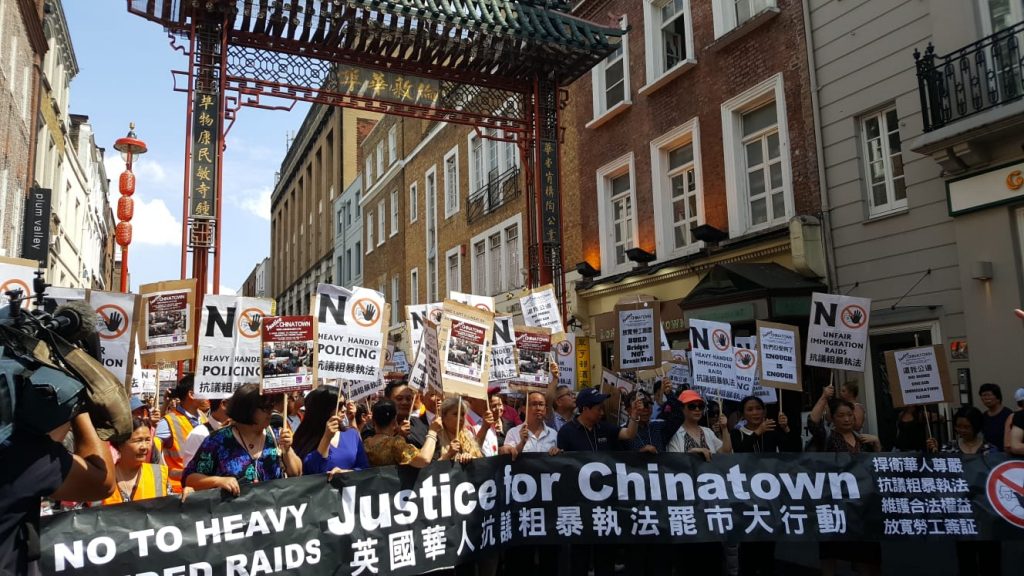 “We are not the silent community anymore! We have our own voice!”

Chinatown, one of the busiest parts of central London, was shut down yesterday for five hours. Many shops had bi-lingual posters explaining that they were on strike, in protest against ‘heavy handed raids’, and called for ‘Justice for Chinatown’. Often accompanying these posters were copies of recent Guardian coverage of the immigration raids that have plagued the community.

While there has been regular raids monthly and even weekly for some time now, a particularly aggressive raid on the 5th of July has sparked a lot of anger.

“Not only were staff members at the restaurant treated with unreasonable aggression and handcuffed, a deaf and mute woman who started a peaceful protest by lying on the road was manhandled and nearly run over by an immigration van.

When community leaders tried to intervene peacefully to calm the situation they too were treated with contempt and threatened with arrest. Finally, after two hours, the protesting woman was taken to the hospital and the area declared a crime scene, partly to disperse members of the public who began to complain about the behaviour of police and immigration officers.”

An eye-witness took videos that went viral, and said:

“Today they [Home Office immigration officers] have crossed the line.

A lady pleads to the officers to let her daughter go. She pleads in front of the van. The driver reacts by driving the van forward and hitting her, in an attempt to get her to move. The lady, as well as other protesters, are then man handled by the officers.

The Chinese community is being aggressively targeted, and it is unacceptable.”

Whistles sounded the start of the strike at noon, and people started to gather at Newport Place. Signs were handed out with slogans calling for justice and condemning the raids.

Several community leaders spoke, and noted about how those who work ‘illegally’ are forced to do so because there are no legal routes. They called for avenues for those without legal status to be able to get it.

“We want justice. We are not silent. The images we want coming out of Chinatown are not these raids.”

Hundreds of people – organisers say it was up to 1,000 – marched from Chinatown through the streets of London, passing iconic UK landmarks. A huge crowd gathered at the Home Office, chanting ‘Justice for Chinatown’ and ‘Enough is enough’!

Speakers recounted again the raid of July 5th, and how it has sparked so much anger. A community worker said he was “totally devastated” by the latest raid and the officers’ lack of regard for the safety of people. Several speakers noted how this violent raid happened a week after community leaders had a round table with Home Official officials, and therefore broke any potential trust. Another important point was made repeatedly: an end to the raids is not enough. The government needs to create a way for undocumented migrants to get legal immigration status.

The action ended with the signing of an open letter, which was then handed over to a Home Office official.

Joseph Wu, one of the organisers of the action and head of the Chinese Information and Advice Center noted that while migration from China has fallen over recent years (due to new restrictive immigration laws) raids in Chinatown have increased. He also questioned the legality of the raids, and where the ‘intelligence’ was coming from.

The protest received extensive local and international coverage, including in the Chinese press.

This is not the first time that Chinatown has protested against raids. In 2013, restaurants shut for two hours in protest.

2 comments on ““We are not the silent community anymore!” Chinatown protests immigration raids”