Homeplus is a small charity that makes a big impact. Based in South Belfast, the most diverse constituency in the north of Ireland, it has been a lifeline and a place of refuge for those failed by the state.

Our communications officer Luke Butterly recently talked with project coordinator Ryan Doherty and support officer Elfie Seymour about the history of the centre, their projects, and some their biggest challenges. 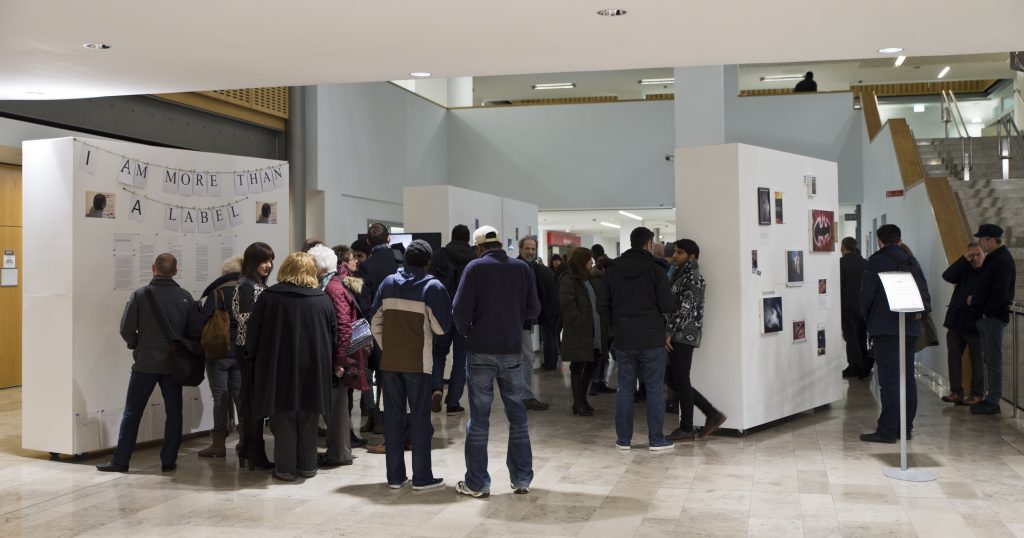 Homeplus has adapted its services to meet the changing situation of homelessness in the city. Starting in September 2001 – and for every night since then, 365 nights a year – they do outreach with people sleeping rough and provide soup, sandwiches, clothes, blankets, sleeping bags, as well as linking people in with the local housing authority.

In 2006 Homeplus opened a drop-in centre for migrants who were facing homelessness, but who were ineligible for state support. At the time, this was primarily people from ‘A8’ countries (eight of the ten countries that joined the European Union in 2004). When the laws changed in 2011, allowing people from those countries access to housing assistance, Ryan says this meant people could “get their foot on the ladder and be able to look for jobs, and they didn’t need our services as much.”

In the same year, Homeplus was approached by local support groups about extending their drop-in services to refugees and people seeking asylum. Seven years later, and Homeplus is open five days a week and offers a wide range of services. These include an advice and support centre, free clothes and other essentials, three levels of weekly English class, art classes, and a weekly optician clinic offering free eye test and glasses.

Crucially, they provide emergency financial and accommodation support for people facing destitution. Their services – be it cooking, art projects, or the allotment – are all user-led. Every day there is a hot meal, and each Friday between 60 – 150 people partake.

With a small team of workers and volunteers, this workload is impressive. But it’s clear that what Homeplus provides is much greater than the sum of its parts.

Ryan: “We don’t have members as such, it’s just whoever comes in the door. […] We bring it down to the very basic essentials – having food and shelter, the most basic of human needs. People may have shelter at night, but for some people they’ve no place to go to during the day and actually feel welcome.”

So it’s the very basics, but it’s so much more than that. […] To be able to go somewhere where they can call a home from home – it’s the atmosphere and the ambiance we try and create for people. So from that basis people start to make connections, start to make friends, learn how to navigate life here. You are meeting people who are in similar situations to what you are in.

It [the centre] matters because it makes such a difference. It gives hope to those people who are starting to lose faith in everything. It matters to say to the person that ‘You count, for no other reason than because you exist.’ And to help them remember that they are not any label that our society tries to put on them.”

Elfie: “I think it’s important for people to know that there is somewhere for people to go in Belfast where they are going to be listened to, and someone is going to try – at least try – to help them with what they need.

Because it is so personal, every one person who walks in walks out with either mine or Ryan’s phone number. That’s someone in Belfast who they can ring anytime if there is an emergency. Having someone who is watching what is going on, and is a witness to all these public services – the housing, the health, the solicitor, whatever it is – and has an idea about what should be happening.” 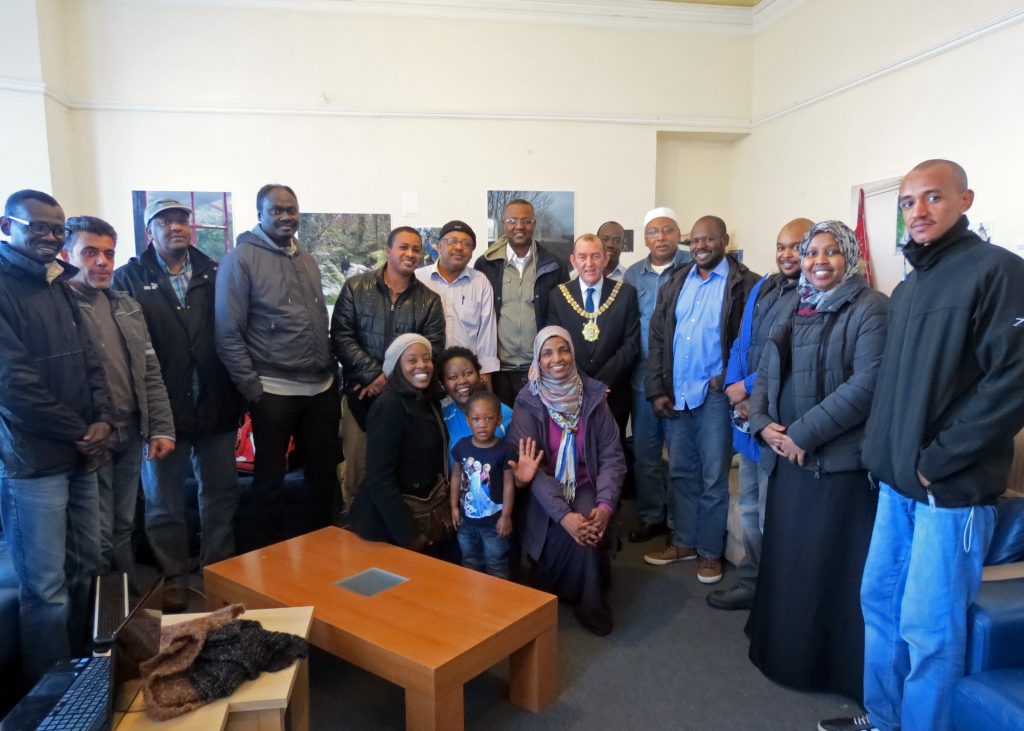 The issues facing Homeplus and the people who use it are not unfamiliar.

As elsewhere, people seeking asylum in Belfast are not allowed to work and thus are often provided with meager state assistance: £38 a week and somewhere to live. As countless independent and governmental reports have highlighted, the system of asylum housing – often run by multinationals like Serco and G4S – is a “disgrace”. Accommodation is often of a poor standard, is unsuitable for someone’s needs (i.e. mobility), recurring difficulties in reporting problems and getting a timely (or any) remedy, and staff have been reported to intimidate residents and show scant disregard for their privacy or dignity.

Ryan tells me that “when people report problems to the individual landlords or the housing contractor, it’s not being properly resolved. There needs to be more accountability”. He highlights that particular landlords have faced repeated complaints about their behavior, but no action is taken against them, and asks rhetorically “What is the line they need to cross?”

Elfie describes the frustration that comes with casework; she is able to apply pressure, but only in individual cases. Even then, often there is no accountability.

“And then it’s ‘where do you go?’. It just feels like you are banging your head against a wall about something that is so serious.”

She tells me she uses a lot of resources from local activist group Housing4All, who have made information about rights and standards from the housing contract available to support organisations and individual residents. Ryan says this kind of work needs to built on and expanded, and the solution lies in part by “informing asylum seekers in their language, in a way that is understandable, of their rights, of what the standard that they should be getting.”

As I talk with Ryan about a societal-wide issue – the high prevalence of mental ill health, and the lack of funding and resources to tackle it – he tells me horrific stories of people failed by mental health services in Belfast.

Ryan highlights how many people who use Homeplus “are coming from countries with so much conflict and trauma that we couldn’t even comprehend.” People have to undergo lengthy, hostile asylum interviews even when not yet psychologically fit to do so. Forced to relive traumatising experiences, this can lead to contradictions in their interviews. The Home Office is famous for fixating on even the smallest contradictions or omissions to claim people are not ‘credible’ and deny them asylum. Ryan would like to see people be given treatment first and do their interviews at a later point. Read more about ‘credibility’ in asylum claims here.

As well as highlighting the problems of access to treatment, both workers are clear that a leading factor contributing to mental ill health is the asylum system itself. While conscious of the high levels of resilience and resistance, Ryan describes the asylum process as ‘an open-air prison’:

“We’ve seen a dramatic increase [in mental ill health] in the past number of years; related to people with ongoing cases, or are outside of the [asylum and immigration] system. It’s the degrading, dehumanizing process of asylum.”

Read this account of the ‘mental torture’ that someone went through during the seven years it took to be granted refugee status.

For others, the threat of detention “hangs over people like a guillotine.” When people are detained here they are taken to a ‘short-term holding facility’ in Larne, a port town half-hour’s drive from Belfast, before being moved to a long-term centre in Scotland or England – away from solicitors, family and community, and support structures.

The threat of detention creates anxiety for people every time they report (or ‘sign‘) at the Home Office, which is required at regular intervals (ranging from every few months to as frequent once a week). To combat the uncertainty, Homeplus and the local community operate a version of ‘signing support’:

Ryan: “People will ring me before signing on, saying ‘if I don’t come back before a certain time, contact the solicitor’. People also have this relationship with each other – and that seems to work pretty well.”

Various groups across the UK operate signing support. Read up on how to help someone prepare for detention, and our interview with the legendary Bristol Signing Support Group.

“I’m always amazed for a lot of the people seeking asylum, of their strength, their sheer willingness, the resilience of their mental health – not withstanding earlier issues discussed – their coping strategies, their their positivity – it just baffles me.

With the stories that people have lived through and our living – how to do you even get out of bed, let alone coming in and volunteering, putting yourself out there?”

The Homeplus Women’s Group was started about eight months ago; it runs weekly and is based in the north of the city. Elfie says the location alone was important, as asylum housing is increasingly located in north Belfast, yet the majority of support services (including the Homeplus drop-in centre) are based in south Belfast. Due to low incomes and sectarianized bus routes, getting from one side of the city to the other is costly and time-consuming.

Staff from public services are invited to come and speak, with recent guests including the educational authority and the health service. But Elfie says that what can be most useful is the knowledge people share with each other:

“Some weeks we just chill and have coffee and people chat about stuff that is going on with their asylum stuff. Which I think is good because some of them have been here a long time, others less so, and there is a lot of people asking questions.

Because the women are at different stages [of their asylum claim] they can feed into it – and say ‘Oh, that happened to me’ or ‘This is my case’ or ‘Watch out for this, because the interviewer did that.’”

Asked to reflect on how they understand ‘solidarity’ through the course of their work, Elfie emphasises that the starting position should be solidarity rather than charity – “Because on paper Homeplus is a charity, but in practice the way we go about it is different” – and the importance of solidarity that is practical.

“How can I help you. And not only that – how can you help me? What can we create together? How can we improve our lives, and what can we address together. You are not in this alone.”

Homeplus are over-stretched and under-resourced. Please consider donating to their work, or volunteering if you live locally.