A guest post by Sonel Mehta, Founding Trustee of BritCits.

Quite a feat, given David Cameron stated ‘when people’s love is divided by the law, it’s the law that needs to change’, various election manifestos saying families were the bedrock of our society and expressing a desire to make UK family friendly, MPs like Jeremy Hunt and Simon Hughes lecturing us on learning from Asian and African cultures on caring for elderly with nursing homes to be the last rather than first resort.

Families are an easy target.  They’re not big companies whose voice the government hears when tightening of skilled migration is bad for­ business. They’re not universities with the power to lobby the government when its treatment of international students endangers the higher education sector. They do not have limitless time or funds to fight the Home Office for the basic right to live together.  Much too often even a clear caseworker error makes re-applying easier, quicker and cheaper than appealing (if allowed), or where even a win at tribunal sees the Home Office appealing further.  Whilst companies refused a visa for an employee may find a replacement, families are not so easily substituted.

Much hope is thus pinned on the Supreme Court in delivering a fair judgment in the MM case, questioning the legality of imposing a financial requirement on British citizens with a foreign spouse, and the BritCits case on Adult Dependant Relatives (ADR) rules in the High Court on 19th-20th April 2016.

Brits who wish to sponsor a foreign spouse must themselves earn £18,600 – more if there are children involved.  This is in effect a financial penalty on mixed-nationality relationships.  It is of course not marketed in such a way because mixed-race are a fast growing ethnic group – a rising percentage of the voting population.

£18,600 is nearly 50% higher than what someone working full-time on the minimum-wage could earn and the level at which a British citizen is disqualified from income-related benefits.  Unjust, especially when the foreign spouse would have no recourse to public funds, and coming from a prime minister who himself claimed child disability benefits despite annual earnings in the region of £200,000, a luxury property rented out, healthy cash savings, tax-payer funded accommodation and £500,000 inheritance from the bank of Pa’n’ma.

Even those who do earn over £18,600 must engage in a protracted battle for the right to family reunification.  The government wants to stop Brits marrying foreigners; if it can’t do that, it wants to stop British citizens from living in the UK with their foreign spouses, lest it dilute the mysterious ‘British values’.

If this means the family breaks up, fine.  If instead it means the Brit leaves the UK to live in exile, all the better.  A boon for the net migration target and UK is ridden of a stubborn citizen who chooses family over political agendas.  The government sees no issue with the hypocrisy that other countries must accord their nationals the right to live with foreign family, when it chooses not to accord family reunification rights to its own citizens.

Application of the rules

The problem with the rules stems not just from what they are, but also their Kafkaesque application.  The evaluation period can be anywhere from six months to nearly two years, during which time the family is separated.

If the salary on a monthly payslip dips to below £1550, even if the other payslips are much higher, the clock is reset.

If an employee earns £18,599, just £1 below the threshold, cash savings for the entire evaluation period of over £16,000 must be evidenced as money which doesn’t need to be called on in the near future.

Mortgage-free homes, living in an area with a lower cost of living, guaranteed third-party support, and a foreign spouse with a good earnings potential are all ignored.

It is about blocking the Brit from claiming benefits for daring to fall in love with a foreigner – that not all Brits earning less than £18600 claim benefits, is too hard to factor in.  That some of the Brits we’re taking away basic human rights from, simply because they are social workers, charity staff, baristas, security guards, for whom £18,600 is just as out of reach as if it were £100,000 – collateral damage and supposedly easily replaceable, by foreigners with no family ties to the UK.  Migrants who five years down the line, after they have UK experience and have built a life here, we’ll kick out with the same disdain reserved for ‘poor’ Brits, because these migrants don’t earn the even higher requirement of £35,000 to remain in the UK.

The Migration Observatory’s findings are that 41% of employed UK nationals do not earn enough to sponsor a foreign spouse.

The interference is higher for women (55%), 20-29 year olds (53%), people of colour (45%) and those living outside London and the South east, with between 37% and 48% of employed British citizens not earning the required level. 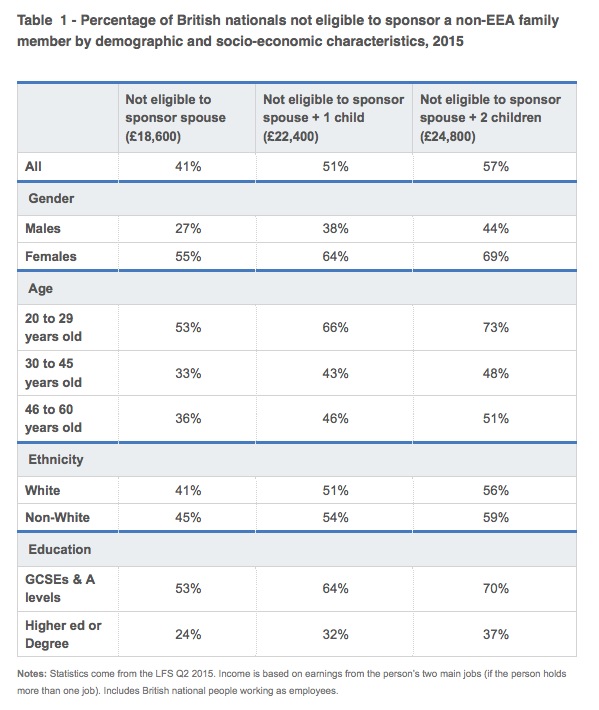 The level of interference is only greater with children also needing sponsorship.  64% of women would not be able to meet the rules to sponsor a spouse plus one child.

The Children’s Commissioner in England has estimated there are 15,000 children negatively impacted by these rules, a number which is only growing.

Praise-worthy one may think, until you dig deeper.  The foreign spouse application form does not ask about any British children – how can the caseworker take into account the interest of a child if the government doesn’t bother to find out if there even is one?

Then there’s the extremeness of the scenarios caseworkers are instructed to consider before allowing the best interest of a child to trump a spouse visa refusal, where:

Through these examples the government says the best interest of a British child whose British parent does not earn £18,600, is to have access to the foreign parent only if they have been abandoned by the British parent, the child is seriously ill, or a natural disaster prevents the child from living with their foreign parent.

Imagine what kind of rules we’d have if the Conservative party’s election manifesto hadn’t made promises of family-friendly policies!

The situation for British citizens who wish to sponsor a foreign elderly parent are even more harsh, with the government’s rules callously relying on putting ailing elderly non-EEA parents into nursing homes overseas – with no value at all placed on emotional care or familial bonds.   Outsourcing the care from halfway round the world leaves the elderly at the mercy of paid help who know their service will not be scrutinised as the rest of the family lives abroad.

The ADR rules are a catch-22.  The government itself has said that an 85 year old blind man who lives alone in Afghanistan, and can’t bathe dress or cook for himself would not satisfy the rules, because his only son lives and works in the UK and has the means to pay for a carer.  In another scenario, the Home Office cites insufficient money as the reason for refusal.

Meeting one part of the rules means not meeting another, hence their being labelled as a ban masquerading as a rule.

Why would the government do this to its own citizens?

Justifications provided by the government for dividing families and forcing Brits into exile are:

i) Preventing abuse.  However, the rules don’t actually tackle abuse.  “Sham marriages” by the government’s own count are a miniscule proportion of all applications, and there is no abuse on the ADR front.  Another sledgehammer to crack a nut strategy.

ii) Promoting integration.  The rules actually hinder rather than promote even the British citizen’s ability to integrate in the community, because of being forced into exile (thereby completely prevented from integrating), working multiple jobs to earn £18600 or annual leave used just to visit family abroad.

This interference with the ability to integrate is exacerbated by visit visas for foreign family being increasingly difficult to obtain, not least because of the steep increases in application fees.

iii)  Cutting net migration.  Every time figures are released, the government is further away from its arbitrary net migration target.  Replacing British citizens who leave with foreign workers who may provide cheap labour fools no one.

With the government failing spectacularly on all four of its declared justifications, one is reminded David Cameron’s party is the one which formed the ‘Hostile Environment Working Group’ whose purpose was to make life in the UK difficult for foreigners.

Alas, not such a far cry from the 1920s-1950s when the government advised British women to not marry Chinese, Hindu, Muslim or ‘negro’ men; some in public office called for anti-miscegenation laws as in South Africa, British women lost their citizenship on marrying a foreigner and migrants had to report to the police on a regular basis, obey a curfew and carry an identity card at all times.

It sounds horrific and a remnant of a colonial past we tell ourselves we have moved on from –a look around any city shows how much richer our nation is because of the melding of cultures and traditions, creation of new ones, and children growing up speaking multiple languages fluently.

Yet, when even in 2016 British citizens are penalised for loving a foreigner, one wonders whether we have moved on at all.

5 comments on “A price-tag on love, and a ban masquerading as a rule”