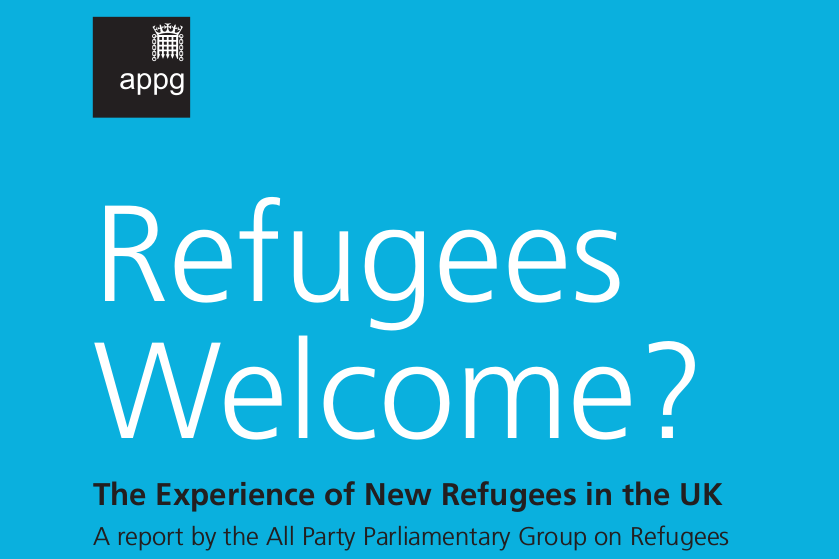 A new report by the All Party Parliamentary Group on Refugees has highlighted serious concerns about the difficulties faced by refugees in settling in the UK.

The report, Refugees Welcome?, describes a two-tier system with support for the small number who are brought to Britain as refugees through resettlement schemes, and a hostile environment for those who arrive seeking asylum.

One of the key problem areas identified was the 28-day period for asylum seekers to move on from Home Office accommodation and support into mainstream housing, jobseeking and welfare benefits. In the last 9 months alone, the British Red Cross has had to help 1,200 who were left homeless and destitute because of this.

But the report also highlights the harm of the hostile asylum process, and how it damages people’s ability to rebuild their lives when they are eventually granted refugee status.

We should not be surprised by this. It is no accident that people seeking sanctuary struggle during and after the asylum process.

In 2015, the government was forced by public outcry into an embarrassing u-turn, and introduced the Vulnerable Persons Resettlement Scheme for Syrians. But while the scheme was being announced, the then Home Secretary Theresa May also made a conference speech described as “thoroughly chilling” by the Refugee Council. It amounted to a confirmation and extension of the hostile environment, where government departments would work together to discourage refugees from coming to the UK to seek asylum, make their lives miserable if they do get here, and reduce the numbers granted protection.

Many of those who gave evidence for the report said that to understand the experience of refugees in the UK, the impact of the asylum system must be considered.

“To help ensure the inclusion of refugees, support cannot simply start at the point of granting refugee status; it must start much sooner, at the point of making the asylum claim.”

One woman they spoke to, who had recently received a positive decision on her claim, explained that, having been through the difficulties of the asylum system, she didn’t feel ready to start sorting out things she was now expected to deal with, such as finding accommodation and securing employment. She asked:

“Can’t they see that I’m still sore? I have wounds inside. I’ve been going through this for years.”

The use of indefinite detention was also criticised in the report, the All Party Group reiterated its call for the implementation of the recommendations of the 2015 parliamentary Detention Inquiry, particularly the introduction of a 28-day time limit. The Refugees Welcome? report also cites evidence that it isn’t just those who are detained who are affected by indefinite detention, but the many thousands who live day to day under threat of being detained.

As well as detention, the report highlights the negative impact of living for years in extreme poverty, being banned from working, and the long delays and poor quality of Home Office decision-making. All these add up to a system that fails people, puts them through unnecessary stress and trauma, with long-lasting impact that can last years.

At Right to Remain we work to support local solidarity groups to help each other to get through this system. In Sheffield we recently launched a new Early Asylum Support project, with volunteers helping newly arrived asylum seekers to understand their rights, and be prepared. They may have just escaped the life-threatening hostilities of Afghanistan, Sudan, Iraq or Eritrea, but they have entered the hostile environment of the UK asylum process. It’s vitally important that they understand the nature of the system, and prepare for the difficulties ahead, because their life may depend upon overcoming these difficulties.

The conclusions of this report are clear. The asylum and move-on process creates serious and unnecessary social, financial, health and welfare problems for refugees from the day they arrive in the UK. This impacts negatively not just on individual refugees ability to rebuild their lives, but on our society as a whole.

With the general election looming, voters need to ask themselves – is this the kind of society we want? Ask your local candidates – do they stand for or against this hostile environment? Have a look at the recommendations of the report and ask candidates if they would support them and work to make them happen if elected. And if you want to get involved in practical solidarity with a scheme like the Sheffield one, then get in touch. Because we can’t rely on politicians to help us out with everything.

This government seems determined to disregard basic human rights in an effort to be seen to be tough on refugees. But we are seeing something else in reaction to this. All across the country, thousands of people have been saying enough is enough. Refugees and volunteers are determined to take action for justice. In Sheffield, watching the friendship and solidarity blossom in the information sessions gives us hope – that people aren’t alone, and that we are chipping away at a process that bewilders, isolates and denies.