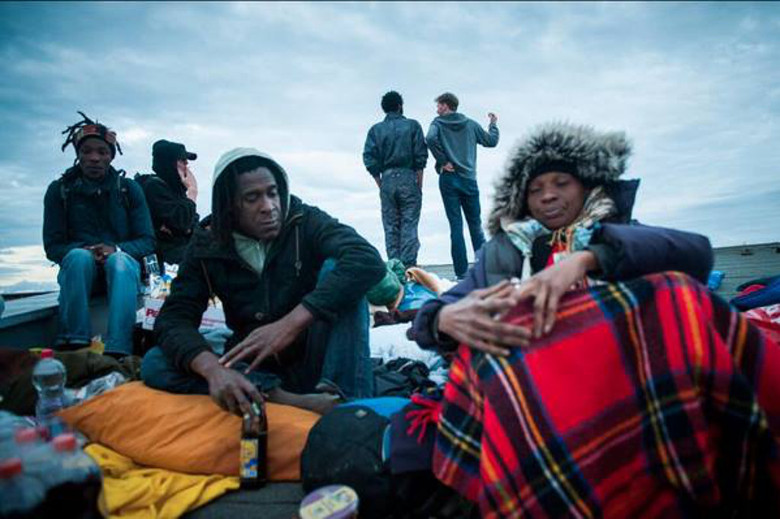 Refugees have taken to the rooftop of an abandoned school building in Berlin to protest the attempt to evict them from their home.  As police surrounded the school, some of protesters declared they would jump if police entered the building.

The former school has been occupied by around 200 refugees since 2012, after hundreds of refugees protested the Residenzphflicht – a law barring those without legal residence from moving freely across German states – by marching nearly 400 miles from Würzburg, in northern Bavaria, to Berlin.  The refugees set up a protest camp at Oranienplatz in Berlin’s Kreuzberg district, and at the Ohlauer school building.

In April this year, the Oranienplatz camp was forcibly evicted.    On 24 June, Berlin police then turned their attack on the occupied former school building:

At 10am, menacing looking undercover cops entered the schoolyard. Later on, 900 cops surrounded the school. The district authorities had lied to the refugees, promising not to evict the building itself. District and church people try to create a rift between the refugees, as well as to force them to move out of the school under the threat of a martial police force. Some refugees and families have left the school, but many more are still inside and refuse to go out. Some of them stand on the roof shouting slogans; petrol was spilled inside the house; cops evicted a sit-in at the entrance door; several hundred people are protesting in front of police barriers. Refugees are threatening to jump from the roof if they are evacuated. Roma families moved out when they were promised that there will be new accommodation for them, but now they stand on the street. So the situation is tense, and the livelihood of many people is threatened.

A peaceful protest against the eviction was violently broken up, but the roof-top protest continued and is now in its seventh day.

Revolutionary News has been issuing updates on the protest, and solidarity protests across Europe in support of the Ohlauer roof-top protest, and have an excellent collection of photographs, videos, tweets and statements on their website.

In the latest news, the number of police surrounding the building had risen to unbelievable levels:

Berlin, under martial law: number of cops brought from 3 other states to evict the refugees at Ohlauer school in Berlin has been doubled: from 900 riot police deployed when the refugees occupied the school, now there are 1720 cops sent to crush their resistance.

Also today, Berlin riot police stormed a meeting of the interior commission of the Berlin state senate called to find a solution to the standoff at the Ohlauer school, in an attempt to clear activists who had attended the meeting and sitting peacefully, holding up signs saying ‘Paragraph 23’ referring to the German asylum law that provides for group recognition.   You can see pictures here. 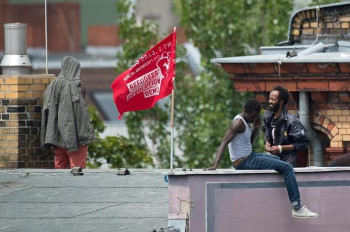 We are now on the roof since six days. The last days have been very hard and exhausting to us, not only because of being on the roof, but more because we are facing harrassment by the police again and again.

During the night of 27/28 June police was shaking the door and made different statements so we could not get a rest. Deprivation of sleep is only one of the methods through which they were trying to break our resistance. As Ramadan has begun, many of us must fast. The lack of sleep due to the police and demands of fasting make the situation more precarious. During the day the police insulted as in racist ways. They were watching us from another roof and waving, not only with handcuffs, but also with bananas.

We continue to fight for freedom of the press. We still demand that the press be allowed inside!

We look favorably upon the fact that the school will become an international refugee center, which had already been promised, and also that we will be allowed to stay in the building during the construction work. But there were other people, who didn’t leave the school voluntarily. Those people are not included; some of them are living in the streets because there was no more space for them in the promised places, some of them didn’t want to move there. We are frustrated about the methods of the senate and outraged by Kolat’s lies. We fight as a movement and expect that everyone encompassed by the agreement with Kolat will get positive answers.

Since the beginning we put emphasis on our demand for residency, the right to stay (!) and that the school was not our main aim. We are aware that the district is not able to fulfill this demand, but at least they could make some pressure and actively support the political demand. If there will really be an international refugee center, what will be the use if the people there get deported? If only the people who are in the building/on the roof now can stay, lager-like structures would be implemented (controls, who enters etc.)

There was big solidarity at Saturday’s demonstration, there were many people there and in the blockades.

It is time to change the Asylum politics!
It is time for a real answer to our Demands.
The right to residency, the right to stay!
These are our rights and we are still prepared to die for them!
We need an answer!

YOU CAN‘T EVICT A MOVEMENT