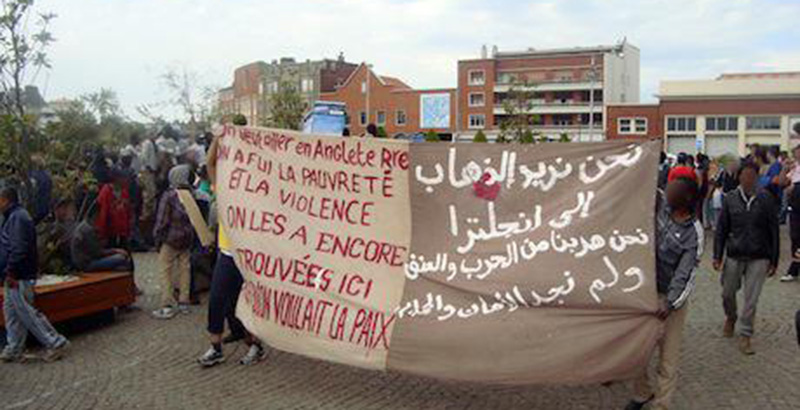 Is France going to have its very own Ceuta and Melilla in Calais, 12 years after the closure of the Sangatte refugee camp?

The growing number of migrants who have been in the Calais area for a few months is leading our rulers to take a dangerous step that contravenes migrant freedom and respect for their rights.

The migrants undeniably have the right to be in Calais. Their home countries – Afghanistan, Eritrea, Iraq, Libya, Sudan and Syria, in particular – bear witness to it. They are fleeing war, repression, dictatorships and arbitrariness and are seeking protection in Europe. In no way is this an ‘invasion’, despite what people, including those at the highest echelons of the state, never tire of saying.

The horrendous conditions in which these migrants are forced to survive in France are intolerable. Despite support from local charitable associations and the generosity of local people, these migrants have been abandoned by the public authorities who offer inadequate solutions and do not shoulder their responsibilities. Significant resources need to be deployed immediately to rescue these refugees who have turned to us.

Do we really need to wait for the first migrants to freeze to death in the Calais jungle camps for people to finally become aware of what is happening?

This blindness is further worsening with the construction of a wall and the deployment of a large‐scale security operation in Calais, a true military apparatus against the migrants, between France and the UK.

We, the migrants and civil society organisations that have been working side by side for years, reject this excess and are asking our fellow citizens to firmly oppose it en masse.

For decades, reinforced border controls, surveillance, intimidation and containment mechanisms and migrant deportation measures have been a complete and utter failure, have cost a lot of money, and above all have caused thousands of deaths. The wall being built in Calais is just a new and sad illustration of the security‐based response to the issue. Is this what we want to do, burying our heads in the sand in an unacceptable and irresponsible fashion?

By refusing to offer asylum and to take in migrants, the freedom we ourselves enjoy is threatened: we are building the walls of our own prison. We do not want this! The building of fortifications in Calais must stop and talks need to be got underway without delay with the British authorities so that they receive the asylum applications (as was done in 2002, when the Sangatte camp was closed).

Along with all the European states or before them, France needs to review its entire asylum and migration legislation and regulations (denouncing the Dublin regulation and abolishing Frontex). France should do this while strictly complying with article 13 of the Universal Declaration of Human Rights and the Geneva Convention. Finally, France needs to review its dangerous and illusory ‘national’ concept of migration, which is completely unsuited to the globalization of human exchanges and the tragedies being experienced at the gates of Europe. In the UN, France needs to play a part in promoting a new form of governance of migration that respects freedom of movement and rights that are finally recognized and applied for all migrants.

On 18 December, International Migrants’ Day, we, the migrants and civil society organisations working with migrants, are calling for people to take part in a large‐scale event in Calais and throughout France: