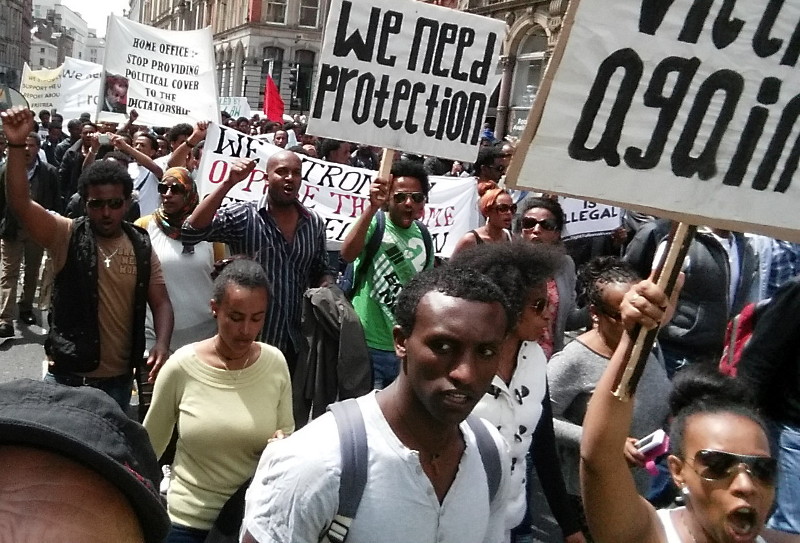 On Tuesday we were in Liverpool, at the Refugee Week national demonstration for justice for Eritreans seeking sanctuary. About 500 Eritreans gathered, many having travelled from across the country, to march to the Home Office reporting centre and deliver an open letter to the Home Secretary. It was quite a day.

The event was organised by a network of Eritreans from across the UK, to highlight human rights abuses in Eritrea and to protest refusals of asylum by the Home Office. It was the largest demonstration of its kind for many years.

Eritreans in the UK are trying to get the Home Office to stop using a discredited country report in asylum determinations, and to use United Nations research instead. The discredited report was produced for the Danish Immigration Services, but was subsequently ditched by them and disowned by its main researcher. However, the UK Home Office is still using it as official country guidance to argue that Eritrea is pretty much safe. Because if the dictator-president’s advisor says Eritrea is safe, it must be, right?

“The Danish report seems more like a political effort to stem migration than an honest assessment of Eritrea’s human rights situation. Instead of speculating on potential Eritrean government reforms, host governments should wait to see whether pledges actually translate into changes on the ground.”

The wait is now over, with the publication last week of United Nations Commission of Inquiry on Eritrea. The UN Report confirmed what the Eritreans have been saying: that the human rights abuses of the dictatorship continue unabated, and may in fact be so serious as to be considered crimes against humanity.

It is considered a crime for an Eritrean to leave the country without permission, and the UN report found that returnees are almost always arrested, imprisoned and undergo abuse to the point of torture.

It is no wonder that Eritreans now make up the single largest nationality of people seeking sanctuary in the UK, with 3,552 applications for asylum in the last twelve months. And it is shameful that the UK Home Office is refusing to grant protection, threatening to return Eritreans to imprisonment and torture, denying the clear evidence of very real, very serious human rights abuses.

to ‘ascribe their decision to leave solely to economic reasons is to ignore the dire situation of human rights in Eritrea and the very real suffering of its people.’ The Commission is very clear in its recommendation: pending tangible evidence of reforms, the international community must continue to provide protection to all those who have fled and continue to flee the dire human rights situation in Eritrea.

As one of the banners on the march said: “Home Office – stop providing political cover to the dictator”

Gathering in Liverpool: “We need protection. We need your support”

Under a new rule, Eritreans, and others refused asylum, must travel in person to Liverpool to submit fresh evidence for their claims, even if they are destitute with no money for travel, and living hundreds of miles away. Every day, people make their way to the Liverpool Home Office centre with difficulty, with fear and trepidation – their evidence could be rejected, they could be put in a detention centre. 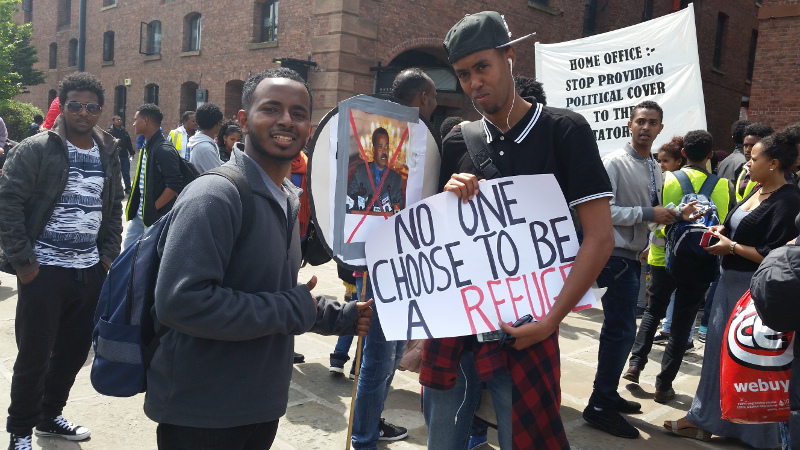 On Tuesday, as we approached the meeting point outside the International Slavery Museum, groups of Eritreans were arriving excitedly, reunited with friends and family, smiling and embracing. The sun was shining, and there was a real buzz. We caught up with some people we’d met recently in Manchester, Leeds and Newcastle. People were readying their home made banners and placards, and it was clear that this was as much a pro-democracy protest against the Eritrean dictatorship as it was about the treatment of Eritreans seeking sanctuary in the UK.

As people started to assemble for some speeches before the march set off, there was a little confusion amongst the museum’s security guards, which got the Police Community Support Officer a little agitated. The confusion was all theirs however, as it turned out to be one of the most well-organised marches ever. It appeared that the arrangements just hadn’t been properly communicated down the line to the security on the day. On the dockside by the Mersey, we were apparently on the Slavery Museum’s private land without permission. This statement bringing a retort from a local Liverpudlian that her African ancestors died in slavery for the building of this dock, so if anything it belonged to her and her community. But anyway, the confusion was cleared up, and the introductory speeches started.

From cheerful excitement, the mood switched to anger, but never aggression, when talking of the human rights abuses that the people gathered had fled to escape from. There was great sadness too, and anguish. Some people were in tears.

“Home Office – shame on you”

And then we started to move off across the Liverpool docks and towards the city centre. Reverberating off the buildings were chants of: “we want justice” “We support the UN report” … “democracy: YES – dictatorship: NO” … “stop deportations”.

The whole event was perfectly organised, the march safely stewarded through the streets. It was a powerful feeling, to be amongst this community, so many people who have fled a brutal regime, who have risked their lives seeking sanctuary, who are so often portrayed as passive victims in dangerous boats, but now raising their voices collectively to demand justice and freedom. 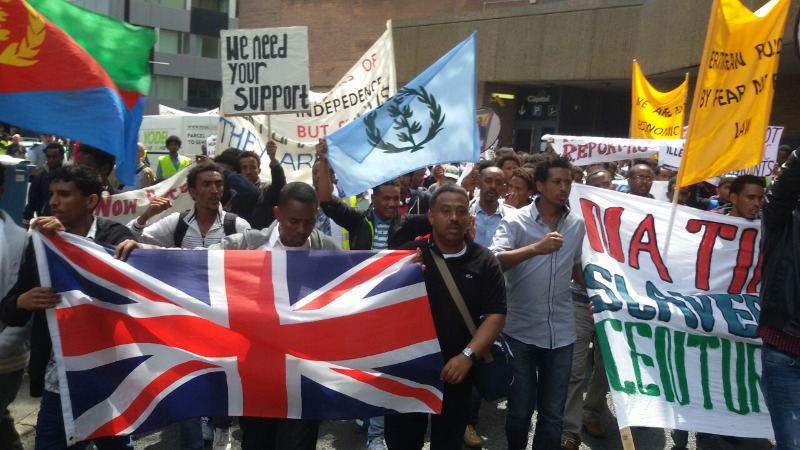 We arrived at the Home Office building in good voice, and the security on the door were quite friendly and helpful, which isn’t always the case at these kind of buildings. With the crowd filling the street, a small delegation asked to see a senior manager, to deliver an open letter for the attention of the Home Secretary, highlighting the concerns of the Eritreans.

At first, at appeared that no one could be found who was willing to come and meet the delegation. The chanting grew louder, for democracy, for justice, against the dictatorship and “Home Office – shame on you”. Still no one was forthcoming, so the Eritreans settled down to sit in the road and wait, while I informed the police inspector that we’d probably all like to deliver the letter and be on our way, so if there was anything he could do to help speed things up…

Finally, the local Assistant Director, Ian Macdonald, was tracked down and came to meet us. He was very friendly and amenable, posing for pictures as the letter was handed to him, and then taking the microphone to address the crowd, and thank them for coming to raise their concerns.

He said: “We are dealing with fluid situations all the time. Circumstances change and that effects people around the world including the United Kingdom. We need these type of events to enable us to review our policies.” 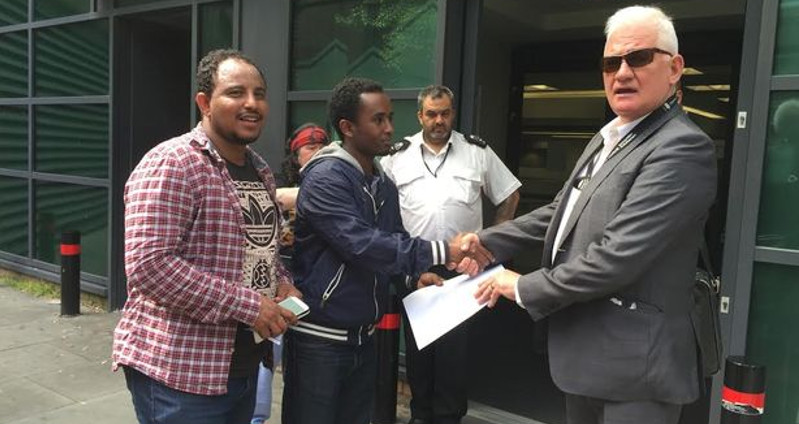 It does not end here

It’s true, we do need these types of events. Because if we stay silent, we stay invisible. Eritreans are in the UK because they cannot live in silence, in fear, in their home country. This Refugee Week, they have shown that they will not be silenced by the hostile environment of the UK asylum system either.

The UK Home Office has made it clear that they would rather see Eritreans drown in the Mediterranean or be returned to torture, than grant refugee protection. Immigration statistics are more important than international legal obligations, than human lives. The people marching in Liverpool were not statistics. They were 500 human voices joining in protest, in solidarity.

The Eritreans have promised that this well-organised, powerful event was only the beginning of a campaign for justice. We hope their campaign serves as inspiration for others who are tired of sitting silently as their rights are denied.

One comment on “Eritreans march for justice in Liverpool”