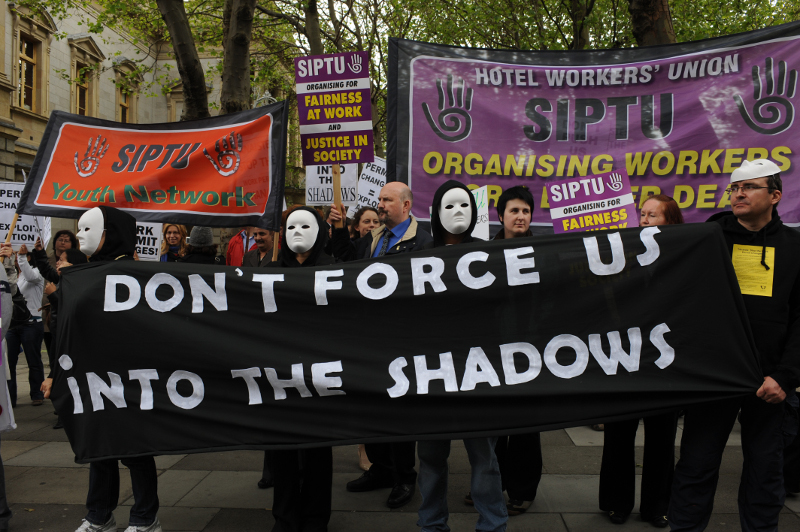 Irregular migration is hard to quantify, as by definition it is not officially recorded.  Irregular migrants are people who owing to unauthorised entry, breach of a condition of entry, or the expiry of his or her visa, lack legal status to stay in the UK and estimates suggest that there may be around  417,000 to 863,000 irregular migrants living in Britain (at the end of 2007).

The estimated cost of forcibly removing all irregular migrants amounts to approximately £20 billion and could take up to 20 years. As much as they would like to, the Home Office do not have the money or resources to make this happen. Whether or not you believe that irregular migrants have a moral claim to reside in this country, it is undeniable that they make up a substantial proportion of British society and therefore their legal rights as human beings must, at the very least, be reflected upon.

Irregular migrants are one of the country’s most vulnerable and marginalised groups for two reasons.

For those who believe in the values of a democratic state but do not consider open borders to be a viable option, the presence of irregular migrants presents a momentous ethical dilemma. How do we ensure that the state is able to act on its moral obligation to control the intake of migrants and at the same time, protect the human rights of this vulnerable group? The two do not go hand-in-hand so, when considering the treatment of irregular migrants, the question a democratic state must ask itself is this:

How many of our fundamental moral principles are we willing to sacrifice in order to discourage people from residing unlawfully on our land?

Some people believe that a state should have a ‘zero tolerance’ against irregular migrants by preventing them from accessing education, health care, benefits and all other rights granted to those with status. If irregular migrants are violating the state law, then why should the government be obliged to protect them? To me the answer is straightforward. In any democratic state people who break the law are not outlawed, they are still protected by the government in many of the same ways as people who adhere to the rules. They have the right to a fair trial, the right to an education if they are under 18, the right to medical care and the right to personal security. Not only is the state morally obliged to protect them, it is in the government’s own interest not to manufacture a group of marginalised and deprived individuals; considering all the social and economic difficulties that can cause.

The same should apply to irregular migrants for two reasons. Firstly, the state is morally obliged to protect the human rights of anybody living within its jurisdiction. Secondly, if the state does not (because it cannot) forcibly remove all irregular migrants, surely it make logical sense to ensure that they are given the opportunity to play a full part in the communities to which they belong, both for the benefit of the individual and the country as a whole.

RIGHT TO AN EDUCATION

Irregular migrants who are under 18 are an especially vulnerable group whose presence poses many obstacles for the state. In every democratic country, education (at least until secondary level) is compulsory for all citizens. It is widely acknowledged that to prevent a child from receiving an education is to grant that child with a life of very limited opportunities. What if (according to the state) that child is not supposed to become part of our society? Giving them an education is likely to strengthen an alliance with their surroundings, making their eventual deportation even harder. Although it’s true that children and young people are not generally responsible for their decision to live in the UK, their parents are. Therefore is it their parents’ responsibility (and not the state’s) to ensure that their child lives in a country where they are able to access education?

Although these arguments do carry some weight, for me the moral reasoning behind allowing irregular migrants to access education is far stronger. In the UK it is taken for granted that every child (regardless of status) must be protected from physical abuse. The reasoning behind it runs deeper than purely preventing serious injury; children who experience physical abuse are far more likely to suffer from psychological damage later down the line. In the fast majority of geographical locations across the globe, education has become such a fundamental part of civilisation that the inability to read, write or work out basic calculations may deem an individual completely incapable of functioning on their own. Therefore, it’s not unreasonable to make a comparison between the psychological effects of physical abuse on young children and the psychological effects that may result from the state’s refusal to educate young irregular migrants.

The notion that it is parents, and not the state, who are responsible for their child’s education naively assumes that irregular migrants have complete freedom when it comes to choosing where they reside. This line of argument does not take into account that many irregular migrants can’t return to their country of origin for fear of persecution. Others may have strong familial ties, such as parents or siblings, who live in the UK and rely on them emotionally and financially. Even if you do believe that parents have made the wrong decision by living in the UK without the appropriate documents, does it not seem unfair to punish a child – who is likely to have had very little say over where she was brought up – on the choices of her parents?

Another line of argument used to prevent irregular migrants from accessing education is the financial strain it puts on the state. It’s undeniable that allowing irregular migrants to access state funded education does add some extra cost to the schooling system however these figures don’t take into account the social and economic cost of allowing thousands of children to live in the UK (potentially for the rest of their lives) without having received a basic education.

Some argue that irregular migrants should not be given the right to work as doing so would undermine the state’s moral obligation to control immigration. It is thought that, just as drug dealers are unable to trade officially, as a matter of principle people who are breaching immigration laws should not be given employment contracts.

Just like drug dealing and other illegal activities, the criminalisation of employing irregular migrants does not result in its abolition. Criminalising any act that is based around financial incentive – whether it’s prostitution, drug dealing or finding employment – does not discourage people from working in that field. It does, however make those who earn their money through illegal means particularly vulnerable because they’re not given the same rights as those who make a living in more conventional ways. This is why irregular migrants frequently find themselves on the receiving end of unlawfully low pay and abhorrent working conditions.

Banning irregular migrants from finding employment also has a detrimental effect on people who do have the right to work. Many employers will chose to hire irregular migrants exclusively as they’re unable to demand a lawful salary or any other employee’s rights. This results in a biased market in which people are discriminated against simply because of a requisite for minimum wage and acceptable working conditions.

It has become commonplace in recent months for British politicians to describe the NHS as a “National not a global health care system.” The 2014 Immigration Act lays out monumental reforms regarding migrant’s abilities to access British health care. Is it morally permissible to prevent irregular migrants (who are banned by the state from finding employment) from accessing the NHS free of charge? 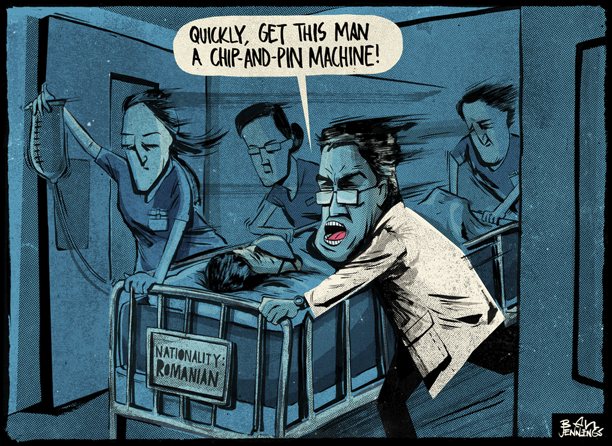 Access to health care for irregular migrants is included in Article 35 of the EU Charter and the International Covenant on Economic, Social and Cultural Rights (ICESCR). Despite this, a Doctors of the World report found that 70% of irregular migrants in Europe face barriers when attempting to access public health care. The low wages, poor working conditions and constant fear of deportation mean irregular migrants are particularly susceptible to physical and psychological health problems. Many people who have been trafficked to the UK don’t have the appropriate documents to live here. Sexual abuse is particularly high amongst this demographic meaning that health care is especially vital for them.

The most persuasive means of arguing in favour of free health care for all is to envisage the alternative. What would happen if the 417,000 – 863,000 irregular migrants living in the UK were not given access to the NHS? The government’s willingness to allow a substantial chunk of its population to suffer and die without any help from the state would create a monumental human rights issue. What’s more, the unvaccinated and untreated population would cause the spread of disease to rise considerably meaning the rest of the population would also suffer. Furthermore, as it’s simply not feasible to ask emergency paramedics to request to see the passport of somebody in dire need of help before they’re treated, the lack of primary health care would put a huge strain on the emergency services, as they would be forced to pick up the pieces of failing preventative methods.

In short, denying irregular migrants the fundamental human rights that are granted to regular citizens is both morally abhorrent and significantly harmful to society as a whole. The fact that the UK, a country that boasts one of the worlds largest economies, is beginning to view public education, basic working conditions, and access to the NHS as a luxury rather than a fundamental part of a functioning society is extremely worrying.

As it stands in the UK, many irregular migrants do have access to some of these ‘privileges.’ However, the 2014 Immigration Act means that the new relationship between the home office and public services will ensure that this is no longer the case. A 2010 strategy document  called ‘Protecting our Border, Protecting the Public’ outlines the Home Office’s intentions of involving private companies and public authorities in what they call ‘immigration crime partnership.’ This involves enabling data sharing between the Home Office and various bodies so as to track down irregular migrants. These include: the financial services, telecoms, utility companies, vehicle Licensing Authorities, Primary Care Trust, local authorities, the NHS and workplace enforcement agencies. This essentially amounts to a Catch 22 scenario in which the government is able to claim that they grant irregular migrants access to various services while ensuring that the migrants themselves feel unable to access said services for fear of being detained or deported.

If Britain wants to continue to be regarded as a country that respects human rights, there must be a firewall put in to place between the Home Office and public services so as to ensure that those who need them most are accessing these provisions. 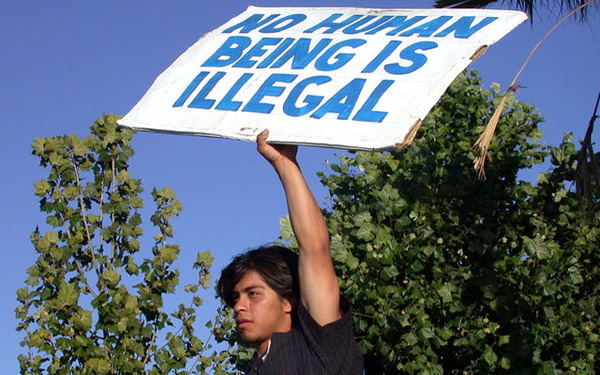 2 comments on “Irregular migrants: the moral obligation of the state”