The recent months have seen a worrying spread of anti-homosexuality bills approved on a global scale. Severe punishments, penalizing same sex unions have been introduced in several countries. From Sub-Saharian Africa to India and Russia, the increase of intolerance is an alarming sign in regards to the global situation of human rights and the protests of International NGO’s and LGBTI rights organizations are not sufficient to stop this situation.

In Sub-Saharian Africa, Amnesty reports, the majority of countries officially criminalizes homosexuality and the past two months have marked a further decline in the LGBTI rights condition. In December, the Ugandan parliament approved life-time sentence for gay sex acts and instituted a range of related crimes including “promotion” or even “protection” of homosexual behaviour. The recent act toughens the bill already in place and highlights the intolerance and discrimination that the gay community faces in Uganda where one Gay activist had been killed in 2011 and many more live under the constant threat of violent aggressions.

Earlier this month President Museveni refused to approve the bill, but it can still be forced through with a two-thirds majority in the parliament even without the president’s signature. This move by Museveni does not signal a sudden liberalisation of his views: he accompanied the decision with homophobic statements and the BBC reports the move was likely motivated by wanting to reach a compromise with parliament, doubts whether the bill would be effective in stopping homosexuality, and with an eye to the international outrage the enactment of the bill would cause.

On the other side of the continent, the 14th of January, Nigerian president Jonathan Goodluck approved a bill delivering penalties up to 14 years for people found guilty of a spectrum of “non-traditional” sexual practices, which in the days after its signing led to a spree of violent attacks and to the incarceration of dozens of men and women.

In December the Indian Supreme Court, in an unexpected move, overturned the abolition of article 377 of the penal code, which banned “non-traditional” sexual unions, reinstating punishments of up to ten years of imprisonment for same sex couples. The 153-year-old colonial law describing a same-sex relationship as an “unnatural offence”, had been ruled out in 2009 by Delhi High Court. The decision to reestablish it shocked the international and part of the national community. However, while LGBTI rights associations, along with the president of the Congress Sonia Gandhi, have described the law as “retrograde” and “unjust”, various political parties and religious groups have showed their support for the High Court’s decision.

Currently, as this list attests, homosexuality is illegal in nearly 80 countries; some of which punish it with the death penalty (Mauritania, Sudan, Saudi Arabia, Iran, Yemen, and parts of Nigeria and Somalia). Moreover, with last month’s court ruling in India, gay sex is illegal now in 42 of the 53 members of the Commonwealth of Nations, the concert of independent countries once ruled by the British.

It is clear how such a situation results in thousands of people forced to flee their countries in order to escape persecution and violent punishments. And while European countries annually receive a relatively high number of asylum applications from victims of persecution due to their sexuality, many countries are failing to provide a common frame work to protect these people.

UK not protecting those in need

One of the countries failing to live up to its obligations is the UK. In its 2013 report ‘Missing the Mark’, the UK Lesbian and Gay Immigration group examined Home Office decision making on lesbian and gay asylum claims. While the report notes that some improvements in decision-making are evident since their last report three years ago, poor decision-making still abounds, with a worryingly high proportion of LGBTI asylum claims are refused because the Home Office does not believe that the claimant has ‘proved’ his or her sexual orientation. You can download the report here, and read more about shocking attempts to make asylum seekers ‘prove’ they are gay through inappropriate questioning on the NCADC LGBTI asylum campaign page. The Free Movement blog has also recently shared questions asked to a bisexual asylum seeker in detention. Read it, and be angry.

Beyond the penal code

An absence of anti-homosexuality laws doesn’t mean an absence of homophobic persecution.  An example of this situation can be found in Russia where there isn’t a law criminalizing same sex acts, but the climate of intolerance, repression and violent aggression has been fostered by the approval by the Duma in June 2013 of a law criminalizing acts of propaganda of “non traditional” sexual relations. This law doesn’t explicitly comdemn same-sex unions but implicitly cathegorises them as abnormal and encorages intolerance with often results in persecution. 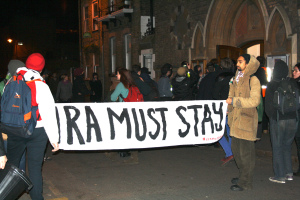 Currently, LGBTI activist and asylum seeker, Irina Putilova is fighting for her right to remain in the UK. In Russia she was harassed, followed, and attacked by state officials, the police, which also threathened to kill her, and far right groups because of her political activism and LGBTQ status. Her situation is exemplary of the multifaceted nature of the risk LGBTI people face, a risk which expands beyond the penal code.

Under such pressing circumstances, European countries are failing to send a strong signal against discrimination and persecution, allowing homosexual people to be deported to countries where their lives are at risk, because the states are restricting themselves to a rigid judicial framework to determine levels of threat that transcend the boundaries of the law.

What you can do

In the UK, the NCADC has supported numerous campaigns from LGBTI individuals fighting for the right to remain.  You can support these individual campaigns – find out more on our website.

Read more about human rights abuses against LGBTI individuals on our Country of Origin information blog – updated information and human rights reports which can be used as a tool in support of individuals claiming asylum on the basis of their sexuality, or in campaigning.

Join our campaign for the rights of LGBTI asylum seekers in the UK: raise awareness about the unjust treatment of asylum claims,  speak to your MP, and call on the Home Office to change its ways.

2 comments on “LGBTI rights under attack”