On Monday we were in North Shields, to join the Dignity March for Asylum Seekers and Refugees, organised by Beyond Borders Tyneside and other local groups to mark Refugee Week.

About 100 asylum seekers, refugees and supporters met at the Metro station, and marched to Northumbria House, the reporting centre for all asylum seekers living in Sunderland, Gateshead and Newcastle. It’s quite a journey for some, including many who have no money for bus fares.

At planning meetings for the event, it was agreed to highlight three main concerns for people seeking sanctuary:

1. Help people to pass safely to Europe – give assistance in the Mediterranean sea, don’t bomb Libya.

3. End the policy of homelessness and destitution for people refused asylum; decent housing for all. 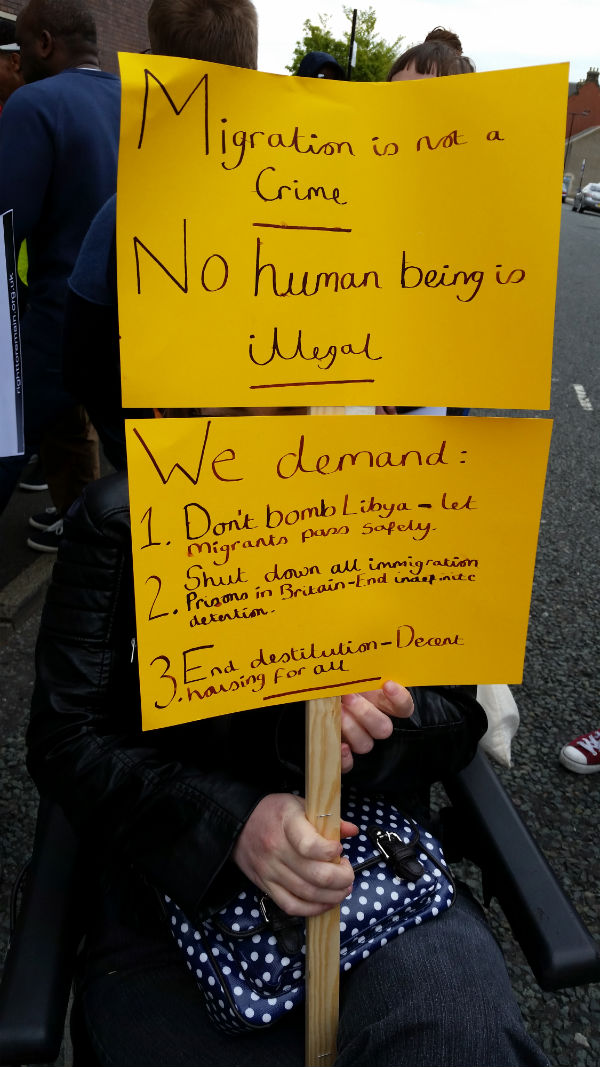 It was also part of a campaign to bring people’s attention to the inhuman and degrading treatment that people seeking sanctuary are subjected to in the UK. At Right to Remain meetings across the country, we regularly hear of problems at reporting centres, where people waiting for a decision on their immigration or asylum application have to sign on a monthly or weekly basis.

Just getting to a reporting centre can be difficult – it can be far to travel, and not everyone has money for the bus – many people walk for miles every week. Once there, it is always a stressful experience. There is the ever-present threat of detention, and there are regular reports of intimidation, harassment and abuse. Of course, many staff, whether security guards or Home Office employees, are courteous, helpful, professional. Some are most definitely not. But no matter how pleasant the individual worker may be, their job is part of a system built around intimidation, harassment, and threats, and that atmosphere permeates the building.

The North Shields reporting centre may be closing soon, with operations moved to Middlesbrough. Recent articles in the local paper, on the plan to move the reporting centre to Middlesbrough, have quoted Northumbria House workers describing asylum seekers as “foreign crooks” who could be “could be left to roam the streets unhindered”. Ill-informed or outright malicious reporting like this will always contribute to fear and distrust. This kind of ‘journalism’ divides us further, and it frequently fuels and encourages racism and racist violence.

On Monday in North Shields, a small group of racists gathered to shout abuse and threats at the dignity march. It was ugly, and at times quite frightening. It was saddening too, to stand alongside people such as the Eritreans I spoke to, who are distraught at what is happening back home, and angry that the UK will not recognise their right of refugee protection. And here they are, being called ‘illegal immigrants’ by a racist gang in the street.

Happily, some activists with the march had brought along the little magpie mobile sound system sound system, providing a disco sound barrier. That’s a top tip for small demonstrations like this. It keeps things upbeat, drowns out abuse, and makes them look funny as they angrily mouth along to disco classics. But mostly we ignored them. As one migrant speaker put it, we are here to talk to the big people in the Home Office, not those little people.

And then the Sunderland contingent arrived. We cheered, clapped, smiled and hugged. It was a lovely moment, to see them walking up the hill towards us. The group – including 20 asylum seekers from places like Eritrea, Libya and Syria, had walked the 14 miles to North Shields, for the third year running.

Along the way they had crossed the river Tyne. From the bridge, they dropped petals into the water, to remember the people who have perished looking for safety in Europe. Rev Chris Howson of Sunderland Minster said:

The coastal walk symbolises the long journey people have to make to get to a place of safety, many fleeing from war and fear of death. The last leg of the journey involved the crossing of the Tyne, and this year recalls the plight of tens of thousands of people who risk death crossing the Mediterranean to escape persecution in Syria, Eritrea and Libya.

After the demo we made our way back to the Metro and the minibuses, dancing down the main street to the sound system, singing “justice for refugees” and “no human is illegal”.  We were tired but we raised our voices together, drowning out the racist chants.  It felt like a poignant metaphor – the racism and hostility facing many migrants is still there, but together we are louder and stronger.

An emotional day.  I was feeling drained, and I don’t have to face that racism and the day-to-day battle for justice and dignity that those seeking the right to remain experience. What must they be feeling? But it’s Refugee Week, it’s supposed to be emotional. As Rev Howson said:

Refugee Week is a chance to give thanks for the gifts that people bring to our region, but also a chance to reflect on the horrors of what they are fleeing from.

It can be pretty horrible once people get here too, but it doesn’t have to be. Beyond Borders Tyneside started as a small conversation class. They now have 90 people a week dropping in, they organise events like this, set up mutual support groups, help each other to get through the system, and to challenge it too. It’s solidarity in action.

I was glad we went, and look forward to returning to our friends in Tyneside again soon. But first, we’re off to Liverpool for the national demonstration of Eritreans seeking asylum.