Last week we organised a networking event in Manchester for groups we are working with in Liverpool, Manchester and Yorkshire. It was the first of a series of meetings we are running in the North West and in South Wales. 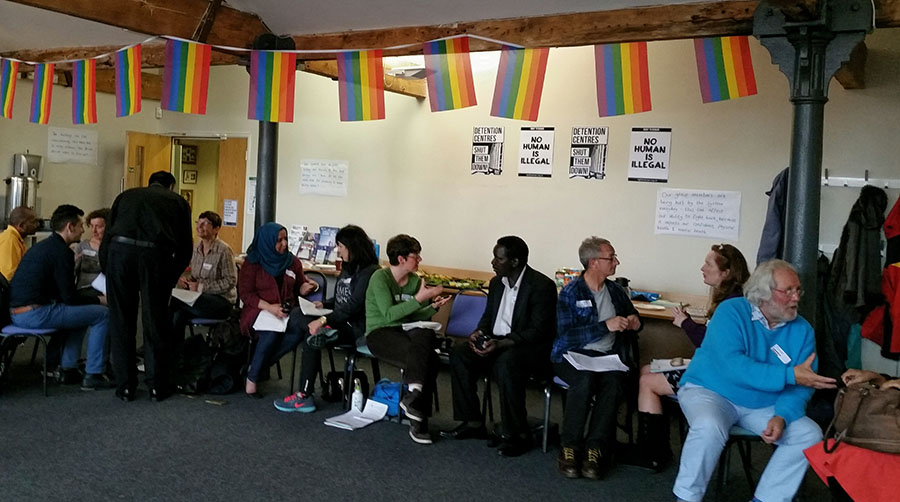 Much of our work is about helping various kinds of groups, with information and resources and support, so that they can help people to get through the immigration and asylum system. So that more people can get the right to remain, and be less damaged by the system as they try to get through it. And we also work with groups to challenge the injustice of the immigration and asylum system, to try and change the system.

These events have been organised in response to requests from various groups to get people together to discuss what they are working on and the possibilities of working together, particularly on campaigning for change.

All of the groups we work with are telling us it is getting harder and harder to help people through the system, to overcome the barriers to justice. And this in turn can make it harder for the groups to organise to challenge the ever-growing injustice in the system. So we structured the events to look at common challenges, possible solutions, examples of successful campaigning, and the potential to grow solidarity and mutual aid.

As everyone we work with knows, the immigration and asylum system is extremely complicated, deliberately difficult to navigate, designed to prevent people establishing the right to remain. It is unfair, it is unjust, it can be traumatic, it can be violent. It can and does deny people their basic human rights. Sometimes it seems that with every step you try to take towards getting justice, getting the right to remain, the system puts a barrier in your way.

For example, your asylum interview should be the first step towards being recognised as a refugee, towards sanctuary, but you find it’s an interrogation, with someone who does not believe anything you say, twisting your words, full of traps and tricks to trip you up. A barrier to sanctuary.

Or when you apply to be with your family, they change the rules, or make it too expensive, or don’t believe your marriage is real, or change the way human rights is interpreted, tell you to be a parent from overseas by skype. A barrier to love and family life.

All these barriers to justice. They can stop you getting legal aid for a lawyer, they can put you in detention, they can make you destitute, and so on and so on – all these barriers, at every step you take. And sometimes it seems like you cant take a step, you are stuck.

It can be local issues they want to change, like problems people are facing at their Home Office reporting centre, or it can be national issues like detention, which affects everyone. It can be legal issues, like the change in law that decides how much you must earn before your spouse can apply for a visa to join you, or procedural issues, like requiring people with no money to travel hundreds of miles to submit evidence for their asylum claim.

So, individuals are facing all these barriers, and groups are coming together to support them to overcome the barriers, and to challenge parts of the system. But then the groups can also face their own barriers making it difficult to do this work.

The system needs challenging, and one of the things we want to explore in these events is how this can be done, and who can do it. Do we all need to be challenging it? Can small groups manage to support individuals as well as campaign for justice more broadly? Can it make us stronger? If we want to take this on, how do we get started, and what challenges might we face?

Part of what we want to do in these events is to find out what challenges and problems groups are facing, and what might help.  We already know some of this stuff because it comes up all the time when we speak to groups – and we know that many are experiencing the same challenges.  We also find out what solutions people are coming up with – it might be internally, or it might be finding support and solidarity from other groups and allies.

One of the participants described some of the problems she has seen when too much rests on the shoulders of just one or two key organisers of a group, and when there isn’t enough working with other groups:

One person cannot do it all. You can’t just have a bank of knowledge in one person. Its  important to share knowledge with other people, and you can learn from them too.  We can work together and make it good. We have to believe in networking.

Some of the challenges identified were common to all of the groups. For example, people described how group members are being hurt by the system day in, day out – and how this can affect peoples ability to fight back because it impacts on confidence, health, mental health. Some groups said that, with so many crises hitting members,  it’s hard enough keeping the group going, let alone working with other groups in the city, or in other towns and cities.

One of the biggest issues facing people seeking the right to remain, and support groups, is the ever-present threat of detention, so we looked at that in detail. We discussed the horrendous impact it has on individuals, and their ability to fight their legal case.

As one participant put it:

Detention destroys life. They know this. You are crushed just because you come looking for safety.

And we talked about how the detention of members impacts on the ability of groups to function. Detention was by no means the only issue discussed, but it was a big one, and it is one where there is currently a substantial movement building to challenge it.

A participant described her experiences in detention, challenging it whilst inside, and keeping up the fight now she is out, planning to travel with the group to the June 6 protest at Yarl’s Wood:

When they put people on charter flights, the place looks like a grave yard. Everyone starts crying for each other. Doesn’t matter which country they come from, its a human being.  One time we started mobilising people – for the next charter flight – we don’t move. We were all locked up, didnt have anything. When people protest inside, it’s often not publicised, but there is more publicity happening now. I protested inside Yarl’s wood, now I want to protest outside Yarl’s Wood, starting on June 6.

In Manchester we made a start on what could become a northern network of groups working together. We started by getting to know each other a bit better – there were representatives from Manchester, Salford, Liverpool, Leeds, Sheffield, Bradford. Different types of groups. We discussed what’s happening locally – who is doing what, who is working together, how well is it working, whats missing? There was a suggestion to organise more meetings, bring more groups, from across the north, from places like Tyneside and Tees side.

At the end of the day, we had identified a lot of challenges facing migrants’ rights groups, but we had also made a start on finding some solutions together. We all know that these are dark days for human rights in the UK, for the rights of people seeking the right to remain. But there seemed to be an atmosphere of determination, that people at the meeting, so many of whom have already endured such hardship, are not giving up. That alliances are being made, and not just between migrants’ rights groups, but with other groups and networks campaigning for social justice, for change.

We will be organising follow-up meetings soon, for groups across the north of England. If you’d like to be involved, get in touch. Together we are stronger.