In this long read from Stuart Crosthwaite, Secretary of the South Yorkshire Migration and Asylum Action Group (SYMAAG), he reflects on the recent Action Conference on asylum housing, and how campaigns across the UK are fighting for humanity and accountability.

We were excited and a bit nervous too. This was the first national meeting of asylum tenants. At the same time as a new £4 billion 10 year government contract for asylum housing and related services is being tendered and due to start in 2019.

The current contract, called COMPASS, has operated from 2012, run by G4S, Serco and Clearsprings. Since then four separate Parliamentary inquiries have confirmed what asylum tenants have been saying since: that asylum housing during the COMPASS contract has been “unacceptably poor” and “substandard”. The Home Affairs Select Committee report in January 2017 described asylum housing provision as “a disgrace” and called for a complete overhaul of the contract. The government rejected the findings and recommendations wholesale and claimed that the “the standard of accommodation provided to asylum seekers has improved since 2012.” We know that G4S are one of the bidders for the new Asylum Accommodation and Support Services Contracts and it’s likely the others will be major outsourcing corporations. 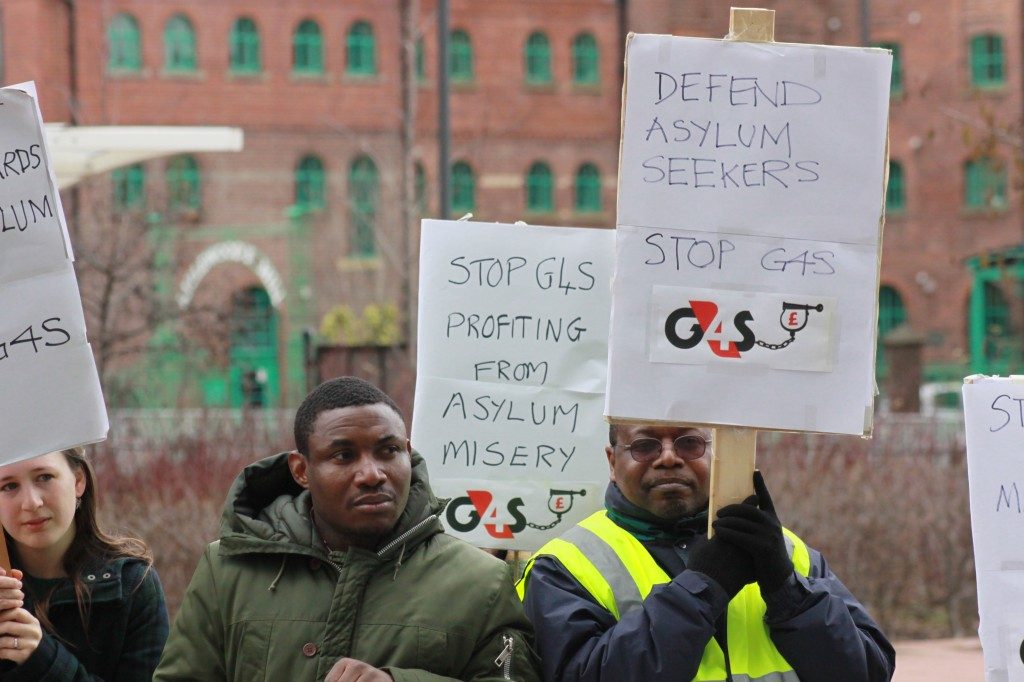 (Protesting in Sheffield in 2012 at the start of the COMPASS contract. Photo credit: Sam Musarika)

That’s why 64 of us came together in Sheffield on February 24th. We want global serial human rights abusers G4S and Serco to be barred from bidding for the new contract to provide asylum housing. So, asylum tenants, migrant rights campaigners, journalists and academics from Yorkshire, the North East, the Midlands, Manchester, Derbyshire, London and Northern Ireland met in Sheffield’s new refugee centre The Sanctuary.

We were welcomed by Manuchehr, co-chair of the South Yorkshire Migration and Asylum Action Group (SYMAAG), who called for support to the women hunger strikers at Yarls Wood who are also up against Serco, G4S and the Home Office.

Lorna Gledhill from Asylum Matters chaired the meeting and introduced 3 themes that ran through the day:

First up was Kate Smith from Huddersfield University and Huddersfield Women’s Centre. Kate spoke about the lack of safety, security and privacy for women and children in privatised asylum housing in Kirklees. “It’s a really harmful house. We are living with rats that are dying, dead. Dying in the house” Shahnaz had told her. “I wanted (stair) gates for the baby, waited for 9 months” said Jane. Doors without locks, no hot water for women and young children and the all too familiar “I complained to G4S but they didn’t do anything”. She pointed to the existence of overcrowded and dangerous “mother and baby hostels” and the effect of such conditions on children’s early development. Kate suggested that embedding children’s rights into the running of asylum accommodation was necessary to achieve accountability.

Makhosi Sigabade and Philani Dube from the Belfast Housing 4 All campaign explained how “you cannot hold anyone accountable” in Northern Ireland’s asylum housing system. Serco and the Northern Ireland Executive (the devolved government of Northern Ireland) are joint landlords, routinely passing the buck for vital repairs between each other. “Serco don’t provide what they say they do” but “If I make a noise will it prejudice my case?” Philani explained echoing a common fear amongst many asylum tenants all over the UK. And an understandable fear – G4S displayed notices in tenants’ houses threatening to report them to the Home Office if they complained. 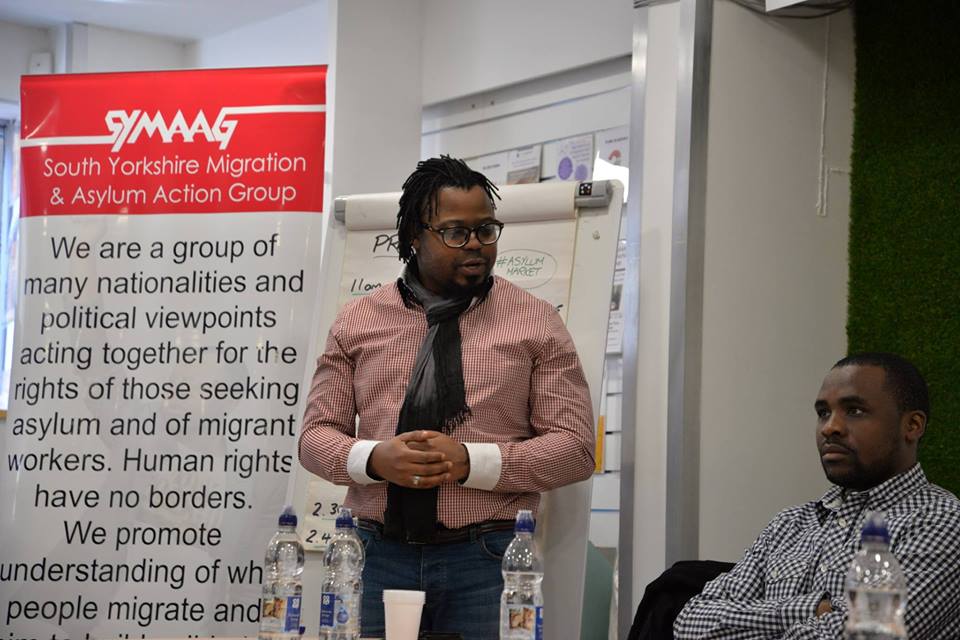 (Makhosi Sigabade and Philani Dube from the Housing 4 All campaign. Photo credit: Manuchehr)

Jalloh Ibrahima from Newcastle’s Migration and Asylum Justice Forum (MAJF) emphasised Philani’s point about the difficulty in speaking out “If you can’t speak good English how can you put the problem forward?” Asylum housing in the North East is run by Jomast ex-G4S subcontractor, infamous for painting asylum seekers’ doors red in an area with high levels of racist attacks.

Jalloh described how MAJF had pressured Newcastle City Council into opposing overcrowding and the practice of forcing asylum tenants to share bedrooms but that Jomast had refused to implement the Council’s decision and had appealed against it. Overcrowding is endemic in privatised asylum housing since contractors are paid per tenant. “Private companies are always trying to make money out us,” he said. Jalloh was inspired by the success we’ve had in Yorkshire in stopping forced room sharing and invited us all to join MAJF’s protests against Jomast’s policy in the North East in March.

Clare Sambrook gave us an illustrated guide to G4S’ grisly history. Clare is the founder of Shine A Light and dedicated to exposing G4S’ record as a serial abuser of human rights and at the same time a “strategic supplier” to the government. A legal challenge to force the government to designate G4S as a “high risk” supplier has been launched by Bail For Immigration Detainees. 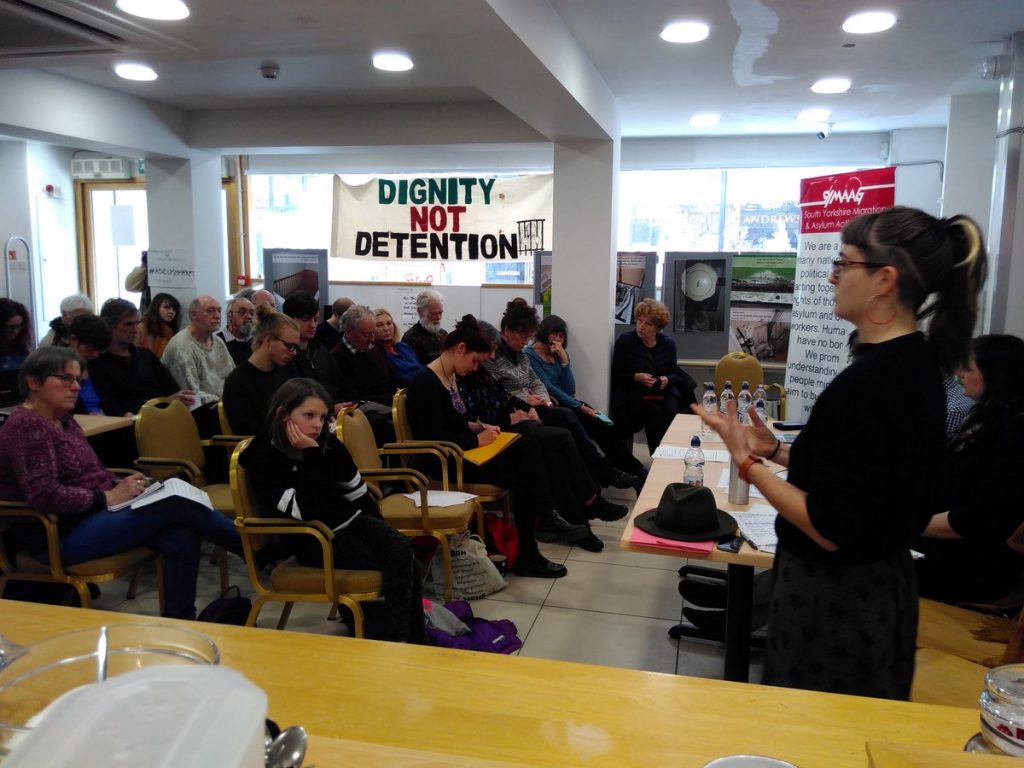 Not only did G4S have no experience in housing when they bagged a £620 million share of the COMPASS asylum housing contract in 2012, they were being investigated for the death of Jimmy Mubenga. He died in 2012 while being forcibly restrained by G4S guards on a deportation flight to Angola, telling them “I can’t breathe”. Clare described G4S apparent impunity. Dave Beadnall, a G4S security guard, fatally restrained a 15 year old child in a children’s prison and was then promoted to Health and Safety Manager. She noted the irony of G4S running an employee vetting company.

Clare pointed to the role of investigative journalism in “shining a light” to expose corporate and state injustice. She pointed to John Grayson’s key role in investigating asylum housing (see here and here), forming the basis for a number of parliamentary inquiries and kick-starting other investigative and campaigning journalism on the what G4S call their “asylum market”

John – co-chair of SYMAAG – explained how he was inspired by a Zimbabwean asylum seeker who told him in 2012 “I don’t want a prison guard as my landlord”. “I don’t just want improvements to asylum housing I want G4S off the contract” he said. He stressed that it was the contracting out of services like the provision of asylum housing, not just G4S, that was the problem. Given the close relationship between government and corporations (here for example) unaccountability and an apparent rotation of corporate contracts was inherent. He echoed Jalloh Ibrahima’s sentiment about the conference saying “we’ve been working at this for 5 years but we’re learning a lot from asylum tenants today”. 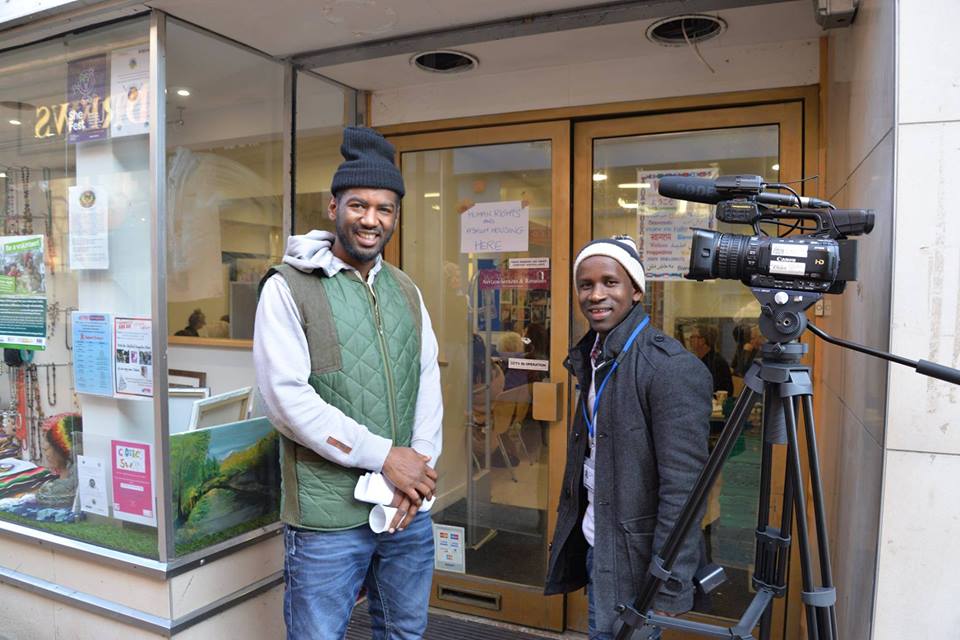 Like most events of this type, the breaks are as important as the speeches and presentations. I could hear animated conversations in many languages between asylum tenants meeting each other or the first time, comparing experiences, sharing ideas. Some of us were interviewed by local TV and radio, some tried on and bought jewellery made and donated by Gogo Manyoni of Hope and Dignity Hearth, others tucked into their dinner. Nobody touched the tomato juice, which I’d bought by mistake, though.

We resumed with a poem about G4S by Jo Thorpe from Nottingham including the line “They’re hard to crack, like a cockroach in a baby’s bottle” (remember this?) We heard from asylum rights advocate Debbie Rea from Leicester about campaigning in the East Midlands (another region with G4S-run asylum housing) and the city’s history of multi-ethnicity and familiarity with new arrivals from around the world.

We called the event an Action Conference, aiming to end the day with a plan on how we can work together for decent asylum housing. So we split into 3 groups to look in detail at how to best use media; about legal challenges to the contracts and how to mobilise our allies.

Apart from sharing contacts of sympathetic journalists and linking on-line campaigning, the media group looked at ways to publicise the toxic brands of G4S, Serco, Clearsprings, Jomast etc. In the North East, the Migration and Asylum Justice Group has demonstrated where Jomast had other business interests telling people about their role in asylum housing.

The legal group looked at gathering evidence to compare the requirements of existing asylum housing contracts with the reality, without which accountability isn’t possible. We also looked at how to support the legal challenge to G4S launched by Bail for Immigration Detainees (here’s one way). We noted the success of local campaigns on housing standards when supported by the threat of legal action. 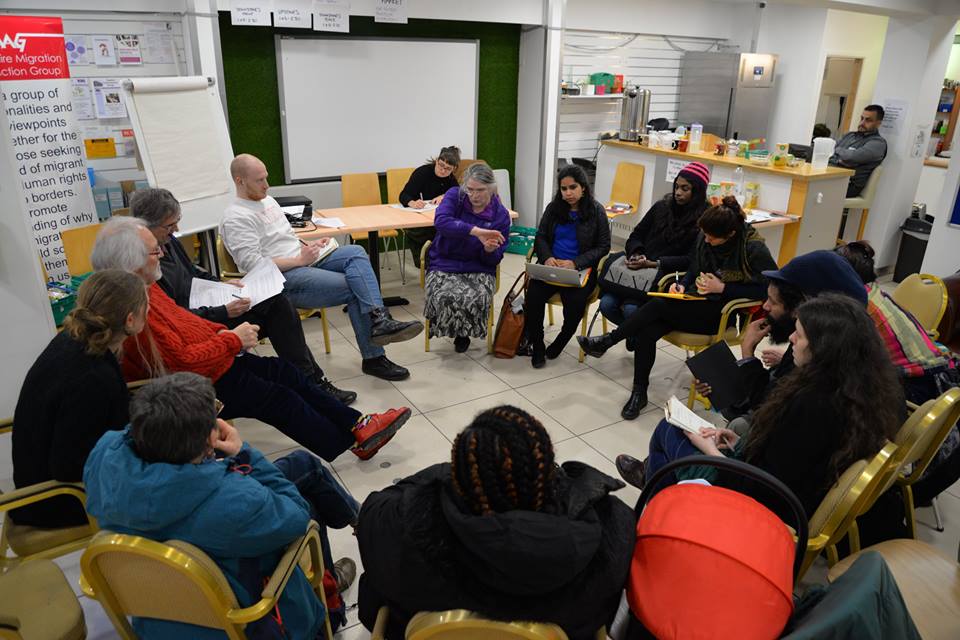 In the discussion about working with our allies people pointed out the high-profile failures of companies like G4S, Serco and now Carillion to provide the public services they are paid by us all to do. This means we have more potential allies in political parties, trade unions and local authorities. We can also find allies amongst other groups campaigning against the abuses of G4S etc, for example the Palestine Solidarity Campaign.

All the groups noted the importance of illustrating the big political issue of how people seeking asylum are treated with personal stories, because the dehumanisation of people is a key to the government’s ‘hostile environment’ approach.

The day was best summed up by Marie from Huddersfield: “whoever gets the contract we need humanity and accountability”. Today’s event and the formation of a national network bring us closer to that goal.