Manifestos being launched and pored over for signs of hope or dismay, hustings a-go-go, politicians in awkward photo-shoots – it can mean only one thing.  There’s an election around the corner.

There’s not long to go, and that’s why we’ve made it extra easy for you to get involved and show the parliamentary candidates that immigration detention is an issue troubling, outraging and mobilising their constituents.

It’s Time4aTimeLimit on detention and it’s time to turn promises into reality – we’ve only just had the strong report issued by the first-ever parliamentary inquiry into detention that called for ‘radical change’ and not just ‘tinkering’ with conditions.  There was cross-panel support that “we cannot go on as we are”.

One of the inquiry’s key recommendations was a 28-day time-limit on immigration detention.  Right to Remain is campaigning for a time-limit on detention, as a first-step to ending the injustice of detaining migrants simply for being migrants, altogether:

A time-limit on detention makes sense for everyone.  Detention doesn’t work – and the Home Office’s increased use of detention despite a decline in the number of forced removals (their justification for depriving migrants of their liberty) demonstrates stubbornness and fear in the face of the facts.  We need to embolden decision-makers and policy-makers to make this change – show them that there are many of us out there, demanding this change.

Once a time-limit is agreed it will be easy to demonstrate that the alternatives to detention work.  Less people will be detained, detention centres will be closed, and the case for ending all detention can be very strongly made. 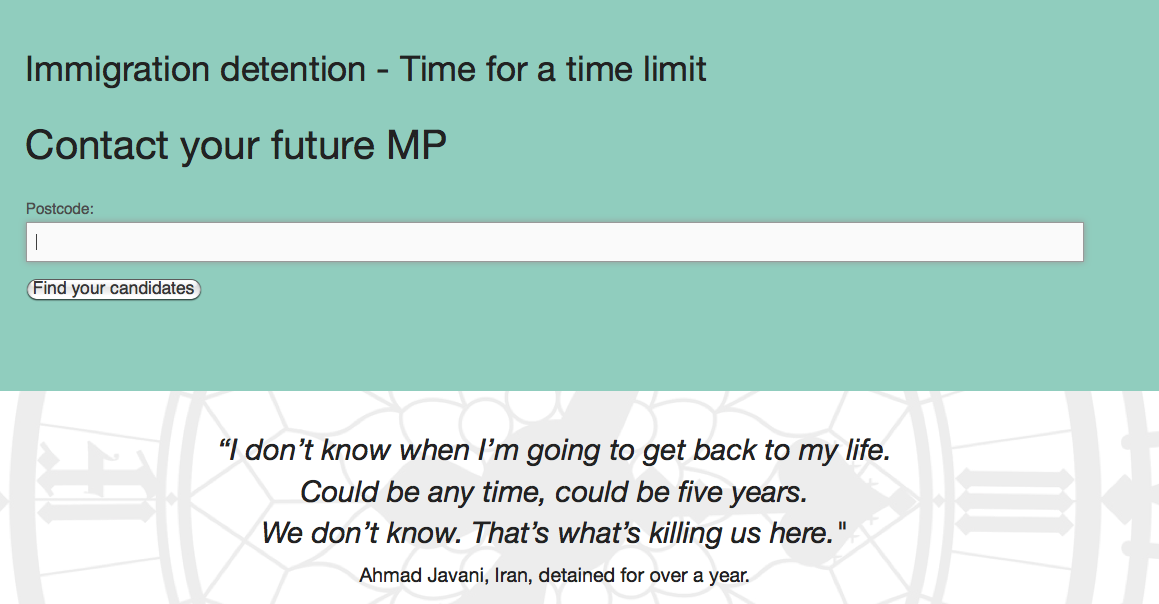 There is a ground-swell of opinion against detention and now is the time to build on this, by getting our future MPs to commit to support the time limit and to work for its implementation after the election.

And that’s why – in conjunction with the Detention Forum, of which we are a proud member – we’ve launched a simple webtool to contact all of your Prospective Parliamentary Candidates ahead of the general election, asking them to get behind the campaign and to work to make it happen if they are elected.

In just a few seconds you can send an email to ALL of your parliamentary candidates (we’ve provided the template text but you are free to turn it into your own words).

Send an email to your future MP

Contacting your future MP with our webtool will only take a matter of seconds – if you want to do more, look no further:

1) If you’re a Twitter user, tweet your parliamentary candidates (PPCs) if they are also on Twitter and ask if they support the #Time4aTimeLimit campaign.  You can find your PPCs and their respective Twitter handles, here.

Here are some sample tweets:

Dear @?X?X, as a PPC in my constituency, I want to know whether you agree it’s #Time4aTimeLimit on immigration detention in the UK?

@?X?X Have you read the #DetentionInquiry report & if elected, will you ensure its recommendations are implemented? #Time4aTimeLimit

2) If you’re Twitter user you can also spread the word about the fight to end indefinite detention by re-tweeting the #Time4aTimeLimit campaign hashtag whenever, and wherever, you can. And if you haven’t done so already then download a #Time4aTimeLimit poster and tweet the image with the #Time4aTimeLimit hashtag to show the diversity of people calling for this change.

4) Search for a General Election 2015 hustings in your local area and go and ask the candidates if they support the Detention Inquiry recommendations and an end to indefinite detention in the UK.   Read the report here (executive summary is here) and see also Detention Action’s helpful briefing here.

5) If you prefer letter-writing to sending an email, you can find a sample letter to send to your election candidates here, and you can find out their contact details at YourNextMP.com