The new Immigration Bill, described by one politician as “the most racist piece of legislation that this country has witnessed since the 1960s… aimed at setting up a regime of harassment for migrants”, will affect international students more than any other group as they already make up 75 per cent of those subject to visa controls.

The measures affecting international students contained in the Bill extend beyond the boundaries of university campuses and will severely impact students’ right to public health care and access to accommodation.

The Bill proposes introducing a fee – from £200 for undergraduate student to £3000 for Postgraduate Research Students with a family – to be paid for minor operations carried out by a general practitioner and accident and emergency services.

International students, and migrants in general, are being treated more and more like a burden to British society, constantly in need to be monitored and disciplined. Private landlords are also going to play a part in the new government scheme by being obliged to check their international tenants’ documents prior to signing the contract, effectively taking on the role of unofficial border agents and expanding the Home Office to the whole of society.

These new measures are in addition to the many controls already in place, which include biometrics entry clearance, institutional immigration checks, police registration (for those from over 40 countries), and employer immigration checks (where necessary). These practices, as rightly emphasised by a 2011 cross-university campaign, seem to be addressed to suspects rather that students.

International students are already reporting that they feel unwelcome in the UK, with a “significant number saying they would not recommend to their friends that they come here to attend university”. Further policing of international students is likely to discourage even more from applying to UK universities, which will result in the economic and cultural bankruptcy of British academic institutions.

Standing up with Selfies 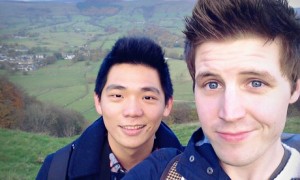 “For every international student or staff, there is a UK friend willing to fight”

The government’s increasing attempts to make Britain a hostile environment for international students has provoked a clever, warm and inspiring campaign from students – both British and international – at the University of Sheffield.

To protest the new immigration bill, students and staff at the University of Sheffield and its student union are taking selfies of themselves and an international friend and uploading them online, with the hashtag #StandByMe. 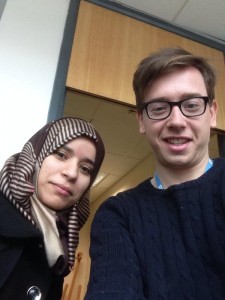 The Guardian newspaper reported: “The aim is to demonstrate the number of international friendships within the university community.

Students will also submit a short description of their relationship, explaining their nationalities, how they first met, and how long they have been friends.

Students at Sheffield say they have already petitioned and sent letters to express their concerns. The University of Sheffield’s student union and international officer even visited parliament on January 30.

They now say they need to get creative in order to be heard.”

Campaigning for the rights of international students

It’s been a busy time for Daniel Stevens, the NUS International Students’ Officer.

In an excellent response to sensationalist journalism – in which Panorma seems to delight in indulging, particularly if migrants are the target – Daniel criticised the BBC’s Panorama programme for its presentation of ‘student visa system fraud’.

Now, Panorama should be commended for exposing wrongdoing and this type of activity should be rightfully condemned and rooted out. However, without context or balance, such coverage can tar the image of every single international student in the UK with its sensationalism and dramatics.

I do not believe there is wide scale abuse. I do not believe the system is “riddled” or “rife” with fraud. I believe that this is an extremely sophisticated, complex and costly system that was rightfully uncovered. It’s ridiculous to make the logical conclusion that because this activity/behaviour is happening the wider system is compromised. First, even if a thousand international students were using this system- that’s only 0.3 per cent of the overall total. Second, they would still not be able to work legally. Third, they would still be monitored by their institution. As one VC put it in an interview, international students are monitored in the UK in a way that would make Stalin proud.

This sad truth is that this simply gives more fuel for the Home Secretary to make further political attacks on the education sector. One which is already barely recovering from her previous volleys. Numbers of international students in further education and private providers have dropped by 80 per cent. The sector has basically been wiped out. Numbers in Universities have fallen for the first time in history. A recent NUS survey found that 51 per cent of non-EU students found the UK Government either unwelcoming of very unwelcoming and 19