“The conference was an absolutely great day, one of the best events that I have ever attended.  I spoke to [the rest of our group] about how they had found the day and they all said that it had been a great day and they were so heartened by the energy and enthusiasm of all the attendees and the chance to talk with people from groups all over the UK. There were some amazingly brave and inspiring people in my group, I was humbled. COURAGE did seem to be the fitting word for the day and I loved how that word was whispered, whispered and then shouted!  Overall the day was a great mix of legal expertise, culture,  grass roots activism, solidarity, compassion, courage and inspiration.”

“Great speakers.  Inspiring stories. So good to feel part of a movement.”

“It was so helpful to meet new people and to see old friends as well as really heartening to build our courage and strength through sharing stories.”

“It was a fantastic event — informative, inspiring and motivating. For those of us engaged day-to-day defending asylum seekers in an increasingly hostile climate it is a source of great strength to know there are people up and down the country doing such good work with some positive outcomes. Humanity will win this struggle!” 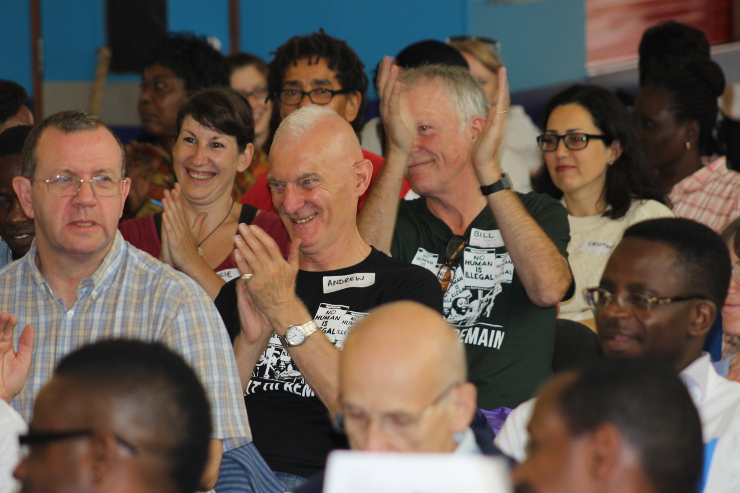 Already three weeks have passed since Right to Remain’s annual conference in London on 6 September.  We’ve barely had time to stop and take stock, and reflect on the amazing feedback we’ve had from attendees.

It was an incredible, emotional day with over 100 people attending from all over the UK.  We’re always inspired and motivated by the brilliant campaigners we meet across the UK – imagine how we felt with so many of them all together in a small hall in East London, making us laugh, cry, shout and sing.  We had delegates from Glasgow, Cardiff, Newport, Newcastle, Sunderland, Manchester, Liverpool, Sheffield, Leeds, Bristol, Slough, Southend, London and more!

We knew that this year’s conference had to be something special, and not just because it was the first conference under our new name.  Times are hard.  It’s not as if things have ever been easy for undocumented migrants in the UK, and those supporting them.  We’ve been fighting injustice, ignorance, racism and xenophobia for years.  But right now, the scale and intensity of our fight can seem overwhelming.  Legal aid provision has been decimated, meaning countless migrants are denied justice in their cases.  The 2014 Immigration Act has been described as “the most racist piece of legislation in the last 30 years”.  The use of immigration detention and raids is on the increase, as is the use of explicitly xenophobic and racist rhetoric by some politicians and sections of the media.

Our panel speakers painted a grim picture of the challenges ahead.  Frances Webber, the radical former barrister who specialised in immigration, refugee and human rights work, spoke of a culture of ‘depraved indifference’, ‘mean spiritedness and dreadful self righteousness’, a political culture producing structures of policing and exclusion, which mean wherever you go you carry the border with you.

Saira Grant, Legal and Policy Director at the Joint Council for the Welfare of Immigrants, summarised the pernicious effect of the Immigration Act, spawned from ‘vulgar ideology’.  She warned the Act would ‘undermine social cohesion, and institutionalise racism and xenophobia’.

Rita Chadha, Chief Executive of Ramfel (Refugee and Migrant Forum of Essex and London), explained the previous Home Office initiatives of the ‘Go Home vans’ and Operation Centurion, and the current Operation Skybreaker which is co-opting local communities into the government’s dirty work of immigration enforcement.  Rita called on us to resist this so-called ‘community engagement’ and make the Home Office subject to a hostile environment!

Along with bringing vital clarity on the struggles of the year ahead, our wonderful speakers encouraged us to resist these outrages – the theme of the afternoon session.  In preparation for some intense networking, knowledge-sharing, and listening and learning we had a fabulous lunch provided by The Chickpea Sisters, a group of refugee and migrant women from south west London who meet every week to chat, eat, and share recipes from around the world.

Solidarity in a hostile environment

After lunch, the participants worked in small (ish) groups to share examples of practical positive action in campaigning for the right to remain, and for migration justice more broadly.  The groups had been obsessively organised like a bizarre wedding dinner in order that the representatives from local groups were spread across the circles, along with professionals, service-providers and individual activists.  The groups had an important task – to discuss a case-study of practical positive action, and then to share with each other examples of things that have worked from their local communities.  Half-way through the session, the participants changed groups in order to meet new friends, and share ideas with a new audience.

Many people seeking the right to remain – and those supporting them and campaigning in solidarity – have experienced injustice, violence and abuse within the legal process of applying for asylum or immigration status.  They have become used to people not wanting to listen – decision-makers, the public, even service-providers.  We believe that campaigning for the right to remain is one way of getting your voice heard, and testifying about what is wrong with the system.  So in this context, asking people to share their experiences can be unsurprisingly negative, as people take a rare opportunity to verbally show their scars.  What was so impressive about the discussions at the conference was people’s willingness to go beyond this and think of solutions,  to share positive ideas and to give space for so many people to have their say.

At the end of the session, people took to the stage to share what they had discussed, and their personal experiences.  It was incredible: person after person speaking of the importance of the support of community groups, of working together, of sharing knowledge and contacts across the country, of picking yourself up after the loss of one of your group, of solidarity across campaign issues.  As Lisa (one of Right to Remain’s two paid workers) weepily brought the contributions to a close, a final contributor shared a beautiful message:

You know, I thought family meant your relatives.  Today, I see that family means all of you too.

We shared a minute’s silence for all those lost at borders, fleeing to safety, and in detention.  One participant described what happened next:

And then, lulling me out of my own head, a quiet chant went round the room. It started at a whisper and it grew louder with each exaltation until it was a unified roar. It was just one word:

More on the conference

Read: Shining a light on the inhumanity of the system.  Ben from Detention Action writes about his experience of the conference.

Read: What we learned from the Right to Remain conference.  Our volunteer Evelina describes her feelings about the day.

Follow the story of the day in Tweets via Storify.

Download the 2014 Annual Report. An overview of the last twelve months of Right to Remain’s work.

Download the 2014 Annual Report. An overview of the last twelve months of Right to Remain’s work.

Donate to Right to Remain!