This piece, written by Lisa Matthews of Right to Remain, was originally published by Open Democracy 50:50.

Life in UK’s indefinite immigration detention regime evokes the ‘barbed wire disease’ experienced by ‘enemy aliens’ interned during the World Wars. We must learn from our past to end detention.

2015 was a significant year for challenging immigration detention. In March, the first-ever parliamentary inquiry into detention released its report, which called for fundamental reform of a system that looks up far too many people, for far too long. Protests outside detention centres grew and grew. After a series of legal victories, the detained fast-track system was suspended. In September, parliament debated detention, and heard cross-party voices calling for a time limit (the UK is the only EU state with no time limit on detention). Although the government is already planning its replacement to the fast-track system, the groundswell of popular opposition to detention will continue into 2016, as will litigation challenging operational aspects of the system. The Immigration Bill currently passing through the House of Lords provides a further opportunity for detention reform.

Each week from 21 September until 18 December 2015 we shone a spotlight on detention, focusing on a different detention centre each week. We first ran Unlocking Detention in 2014, to counter the ‘out of sight, out of mind’ barrier that prevents immigration detention receiving the attention it demands. Using twitter, blog posts, interviews and photos, we’ve shared fascinating and moving insights into people’s experiences of detention – from those who have been detained in the past, those detained right now, volunteers who visit people in detention, family members and communities affected by detention, and NGOs working to challenge the detention regime.

Right to Remain ran this year’s Unlocking Detention ‘tour’ on behalf of the Detention Forum – a network of over 30 NGOs challenging detention in the UK. We worked with Detention Action and a team of Twitter volunteers, with contributions from a wide variety of organisations and individuals, to start a conversation about an issue that is often seen as too ‘tricky’ to discuss, too technical or legal, or too tainted by association with the ‘immigration debate’ rather than being about human rights and human lives. We wanted to show that though there are of course technical and legal matters that underpin the practice of immigration detention, detention is not a complicated issue. The simple message is that detention is the deprivation of someone’s liberty, for the administrative convenience of the state, just because that person has sought sanctuary or security in the UK.

Perhaps inevitably in a project designed to ‘shine a spotlight’ on a shadowy, murky world on injustice, this theme of light and dark has been particularly striking throughout the Unlocking Detention tour. The tension of the ugliness of detention versus the beauty of the outside world; the dignity of those in detention and those supporting people in detention versus undignified government policy; the inhumanity of the system versus the visceral humanity of those who shared their experiences during Unlocking Detention. All of this has played out throughout the three months of the virtual tour.

We asked people to share photo-answers to the question of what they would miss if they were detained without time-limit (or what they did miss, if they experienced detention already). This thought experiment seemed to inspire a eulogic response from some on the beauty of the British Isles. The darkness, the ugliness of detention (known all too well to many of the photo-answer contributors, as visitors to people in detention) prompted people to celebrate light and beauty. 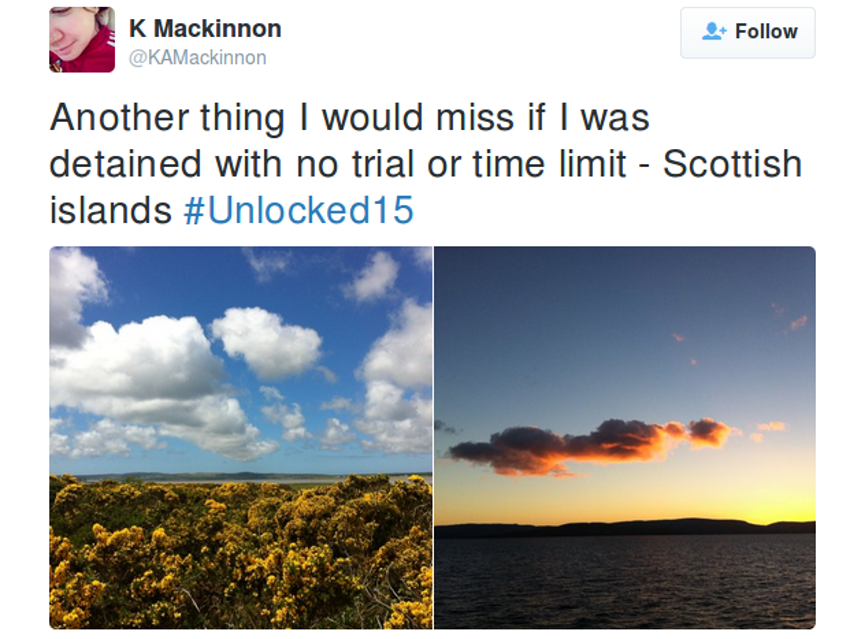 The specific location of some of the detention centres we’ve ‘visited’ for Unlocking Detention provides a bleakly ironic contrast. The Verne detention centre in Dorset has an extraordinarily imposing and intimidating approach, and retains the feel of the old prison it used to be. It sits, however, looking over beautiful coastline with the sparkling blue sea in this photo tantalisingly close. 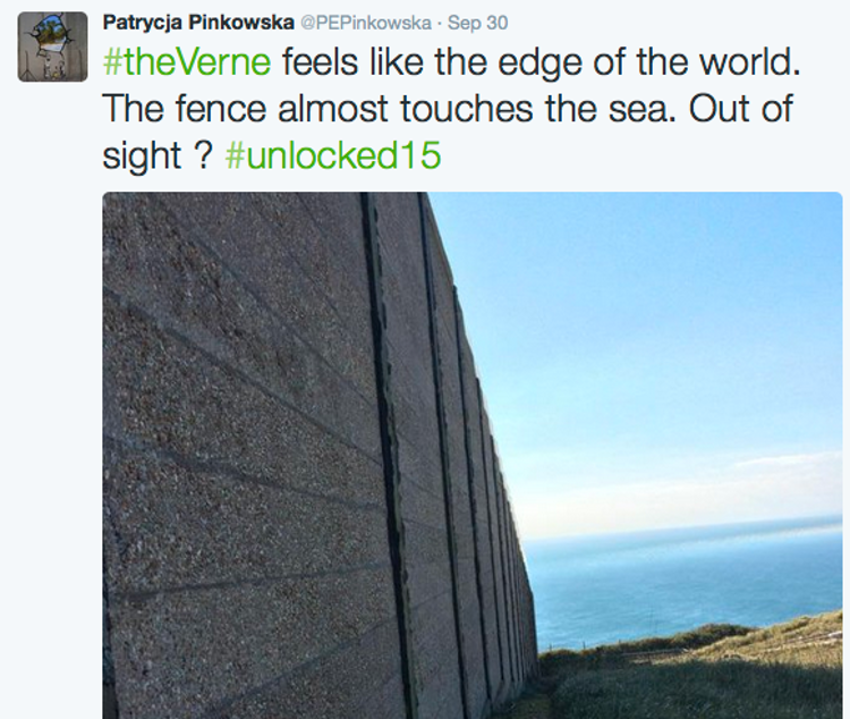 The irony of locations was noticeable, too, in Joe’s description of Dover detention centre (whose closure was announced during this year’s Unlocking Detention tour). Joe was detained in Dover for three years and describes “all you could see when you looked out of the window as the sea. You felt you were on the edge of a nation, sitting on the border. Sometimes you would get French signal on your phone or French stations on the radio.” The phone signal and French radio stations crossing borders with an ease those detained in Dover are denied.

When communicating the realities of immigration detention, we often invoke superlatives, scrabbling for the words to convey the profound impact on all those affected by detention, to those who may know nothing about it at all. We want to shout from the rooftops about this injustice, as we feel the experiences of those detained are silenced and that those with the power to change things cover their ears to our demands. But sometimes its the quieter, understated reflections that hit home the most. An anonymous article by a volunteer visitor to Campsfield House detention centre near Oxford provided a very balanced view of the conditions there, and the staff at the centre:

Some staff have explained that at least the most vulnerable are looked after well in the Centre. Certainly Her Majesty’s Inspectorate of Prisons (HMIP) praises staff relations with people detained at Campsfield. It may sound strange but I find all the staff likeable, concerned and thoughtful – admirable in many ways, people for whom I have a lot of respect. However, in the many conversations with staff, the very fact of being deprived of one’s liberty never seems to register as a big thing, even though it is recognised as one of the most fundamental rights the world-over… This is what is so worrying to my mind, because it shows how institutions condition our thinking and actions, and the effects on the people detained are truly disturbing. In some cases the effects are stark.

As one reader said of this piece, it is a contrast of a dignified response to such an undignified government policy.

Another duality can be found in juxtaposing how Unlocking Detention reveals new, striking ways of describing the familiar, repeated woes of immigration detention.

Many people were struck by this contribution from Yaw, currently detained in Harmondsworth: “I’ve been detained 9 months. I never thought it would take this long. You can have a baby in 9 months!” This memorable turn of phrase describes an oft-repeated problem – the limbo, the uncertainty of indefinite detention in the UK, the only EU country without a time-limit on immigration detention.

The effects of the deprivation of liberty are not just familiar from the recent exposure, nor from the many years people have supported those in immigration detention. There are echoes of Britain’s past detention regime, too.

A common, devastating observation from those who visit people in detention is the deterioration of people’s physical and mental state over time.

The account of the unravelling of a human being described in a piece on Campsfield detention centre, about “Adam, a highly articulate intelligent man who spoke very good English, was humorous, friendly, chatty and participating in many of the activities at the Centre” is heartbreaking.

As is this from David, a visitor to the Verne detention centre:

The first chap I visited was educated and articulate, and had been active in his community in London. But the time he was detained broke his spirit (not permanently I hope). He became distressed and frustrated, to the extent of talking about ending it all.

On reading these accounts, I was reminded of the descriptions of ‘barbed wire disease’ experienced by the Germans, Italians and others considered ‘enemy aliens’ interned in the UK during World War I and II. The letters, diary entries and poems of those interned portray the apathy, the loss of spirit, the deep sense of waste, engendered by their detention:

My dearest Mabel … I am sorry to disappoint you as I see you expected to see me in a better state of mind. I try to smile but it seems too hard at times. It will be 12 months away from you by the time you get this. A wasted year of my life never to return. (letter from Benny Cseh, quoted in “Ally Pally Prison Camp” by Maggie Butt).

We lost all count, all sensation of time. Time stands still where there is no aim, no object, no sense … Such monotony is a state very near death (Extract from Paul Cohen Portheim’s memoir, quoted as above).

While we continue to repeat the injustices of the past, it remains essential to illuminate the lived human experience of the current practice of detention. During World War II, a public outcry about the indiscriminate internment of ‘enemy aliens’ led to a government U-turn on internment policy. If we can repeat the past’s mistakes, we can also learn from our past successes. Popular opposition to and parliamentary discussion of modern immigration detention has never been greater, and we continue to shine a spotlight to chase the shadows away.