The fight against borders in our schools stepped up a notch this week. Against Borders for Children (ABC) hosted its first open conference on Saturday and yesterday they sent an nationwide email, in conjunction with renowned civil liberties group Liberty, to every headteacher in England. The letter requests parents be informed of their right to opt out of the new nationality questions in the census, which even the House of Lords admits has “all the hallmarks of racism”, and retract any data already given without full knowledge of those rights.

To opt out of the nationality data collection on behalf of your children, complete this form and submit it to your child’s school by Thursday this week. For more information, take a look at ABC’s frequently asked questions.
#BoycottSchoolCensus

On Saturday parents and teachers came together with students and campaigners for the 100 strong, first open conference of ABC. The coalition, started in August 2016, has launched for a national boycott of the Department of Education census collecting the country of birth and nationality data of 8 million children. The census promises to make our schools part of Theresa May’s ‘hostile environment’ and would subject children as young as five to the census – and its potentially devastating consequences.

Thanks to public scrutiny brought to bear by ABC, in November the government agreed to remove children under 5 years old from the ‘foreign children database’. But the campaign continues , and is also calling on the government to commit to safeguarding children “from the stigma of anti-immigrant rhetoric and the violence that accompanies it.”

The Guardian reports that Department of Education officials have an agreement, since June 2015, to share the personal data of up to 1,500 schoolchildren a month with the Home Office.”

Since this policy has come into force, some schools have asked only non-white pupils to prove their nationality, also others to bring in their passports – which updated guidance has confirmed is not only unnecessary, but not allowed.

The letter reads: “The Government provided inadequate and confusing guidance to schools about their duties to provide this data and this has led to misunderstandings between schools, parents and pupils about what they are and aren’t legally obliged to do.”

Martha Spurrier, Director of Liberty, said: “It shouldn’t have fallen to campaigners to inform schools and parents about their right to refuse to give this information – but the Department for Education wasn’t going to step up.

“Parents and guardians deserve to know they do not need to be complicit in this Government’s ‘foreign children list’ experiment, which uses children’s education to enforce border controls. If enough of them take a stand, we can make the playground off-limits to border police, defend every child’s right to education and begin to reunite our communities.”

ABC adds: “According to the DfE’s own guidelines, providing this data is optional and does not affect school funding. By the DfE’s own admission, if large numbers of parents refuse to answer the new questions in the January and May censuses, the data collected will be useless and they may be forced to scrap the data collection entirely. This means parents and schools can legally work together to stop this information going to DfE and the Home Office.

If a significant minority continue the boycott then this policy will fall.”

The conference: building a movement against borders for children 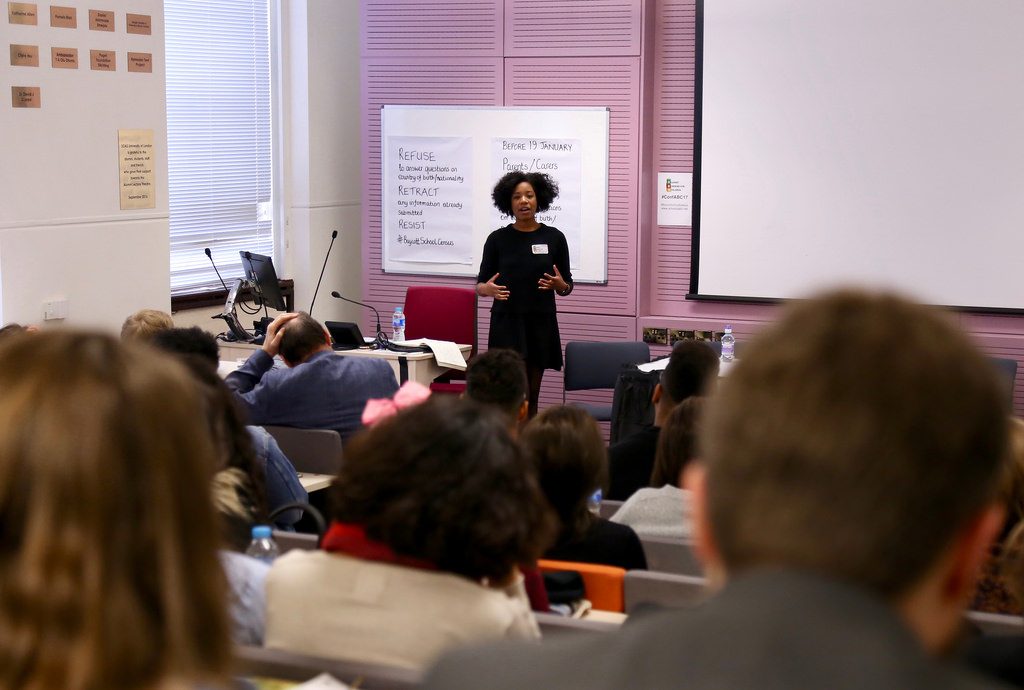 As well as raising awareness of these issues and planning future actions, ABC’s first open conference featured broader discussions about ‘the hostile environment’, imaginative discussions about how race and migration should be covered in schools and the grave civil rights implications for everyone’s data privacy rights slowly but surely disappearing.

Representatives spoke from a range of organisations including Liberty, Latin American Women’s Rights Service, Freedom from Torture, the National Union of Students (NUS), defenddigitalme and Southall Black Sisters, giving some indication of how widely the census is seen as a threat to civil liberties and to children’s wellbeing.

NUT general secretary Kevin Courtney highlighted the corrosive effects of government policies that co-opt schools and universities into the surveillance of people they are supposed to be educating, warning of a “culture of fear & compliance” taking root in schools. He also commented on the high proportion of Jewish teachers who object to the data collection on children’s ethnicity, often with reference to the rise of Nazism in pre-war Germany and sentiments like: “this has happened before.”

Both he and NUS president Malia Bouattia linked the census to PREVENT, the government’s ‘counter-extremism’ strategy which co-opted schools to root out ‘radicalisation’ in the same way they are now being drafted in to root out undocumented migrants. Malia strongly condemned both programmes as part of a wider shift to a total surveillance state. Pragna Patel, director of Southall Black Sisters, put it in no uncertain terms: ‘the powers the police are going to have are similar to those in apartheid South Africa.’ 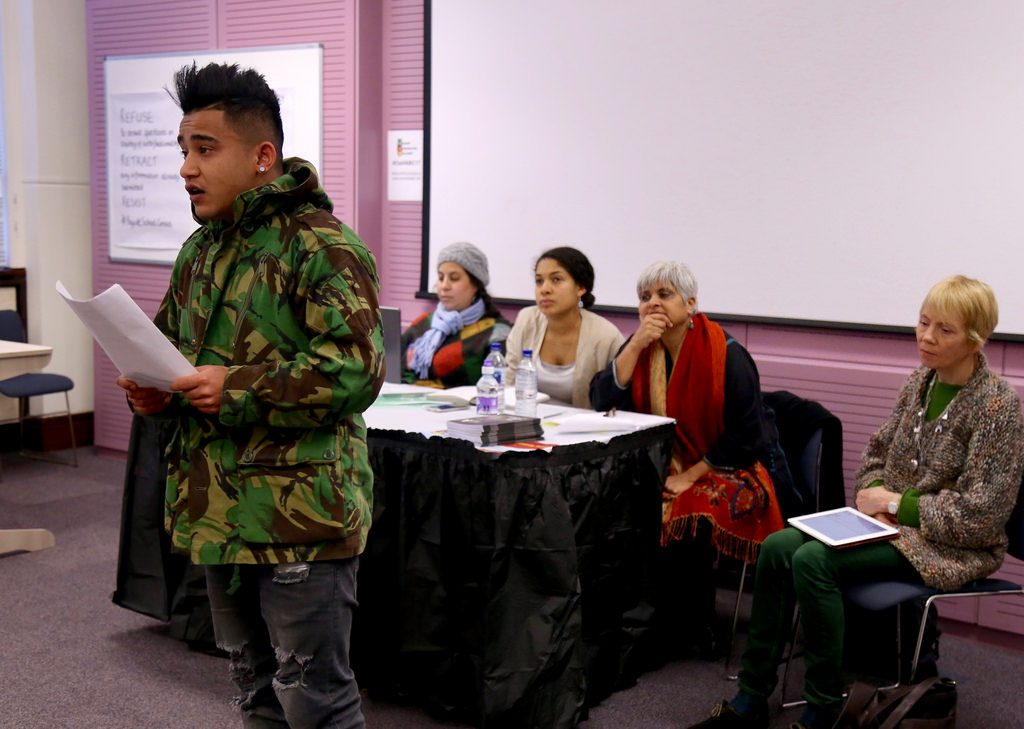 Stories were shared of the enormous impact this has on children’s education; of grades ‘falling off a cliff’ following the deportation of parents or children being taken out of school for years at a time because of their mothers’ fear of Home Office surveillance. Another teacher condemned some schools that have bypassed parents altogether and asked children to submit the data themselves and making teachers ‘unwittingly complicit’.

Young migrants from Let Us Learn, Jawaab and Sin Fronteras shared their experiences of discrimination and their struggles to overcome it, and Ajay from Freed Voices shared his letter to his pre-detention self, adding:

“on paper, this government calls for integration. In reality, they cause division.”

There was also a sobering discussion about the astronomical rise in discrimination and hate crime since the Brexit vote, and the day ended with a strong international focus: a photo taken in solidarity with the Dreamers movement in the USA, ahead of Donald Trump’s inauguration on 20th January.

To opt out of the nationality data collection on behalf of your children, complete this form and submit it to your child’s school by Thursday this week. For more information, take a look at ABC’s frequently asked questions. #BoycottSchoolCensus 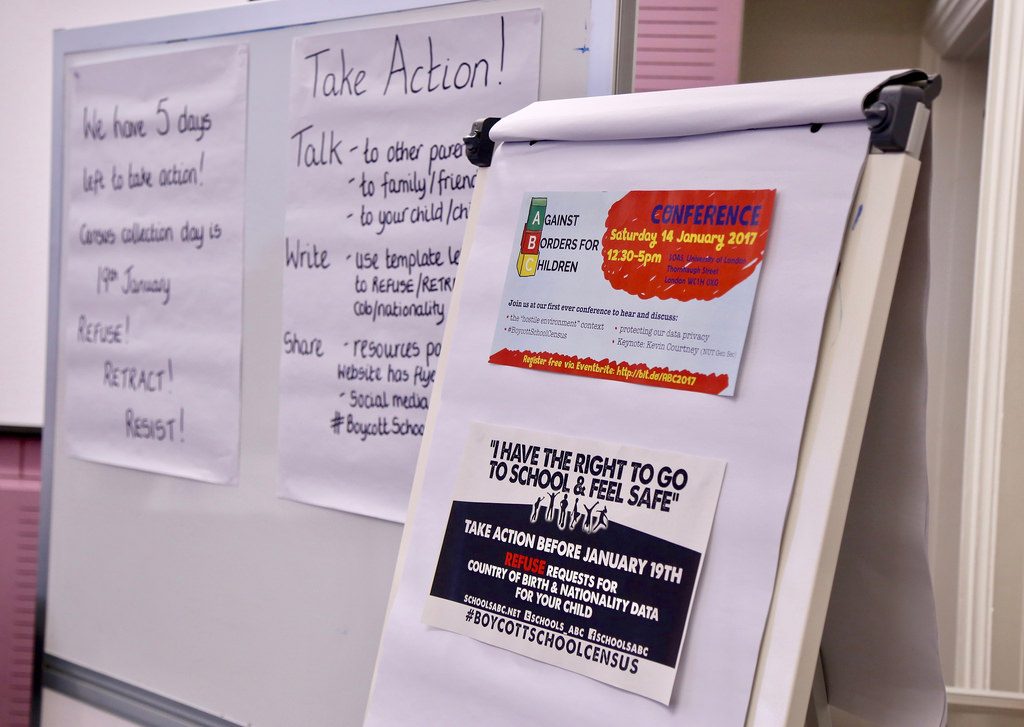 One comment on “Refuse. Retract. Resist borders for children!”