Theresa May has a bad habit of ruining Sundays.

Sundays are a good day for her populist, racist pandering to the right-wing press to receive a lot of air-time.  Tempting as it is to ignore her attention-seeking power-hungry attempts to fashion her own legacy, her latest intervention in the Article 8-foreign ex-offenders-deportation affair came at the end of a week in which the Home Office surpassed even their own incredible record for making your blood boil.

The Mail on Sunday dutifully parroted, ‘“Innocent people will be subjected to rape and violent attacks by foreign thugs because judges have sabotaged a bid by Parliament to deport them, Theresa May warned … Using highly emotive language, Mrs May claimed there would be more muggings on Britain’s streets because judges let foreign law-breakers stay here.”

May’s opinion piece wasn’t solely emotive, however.  It was couched in the language of a reasoned political discourse, albeit a highly misleading one.  May posits the need to rush through legislation to curb the power of these pesky judges as a need driven by the principles of democracy.  The principle of parliament as the ultimate executive in the UK, being as it is composed of the elected representatives of the people of this country.  That democracy is upheld by a separation of powers, with the judiciary acting as vital check on the power of the executive, is a nuance overlooked by May.  One of those nuances that tend to distinguish dictatorships from democracies.  As the Free Movement blog has pointed out, this is not North Korea.

But why let facts stand in the way of a good scare-mongering?  Theresa May is an ignorant, inept zealot overseeing her private fiefdom of asylum and immigration.    Her ignorance of the law is not a new revelation. Kenneth Clark was forced to intervene when the Home Secretary made it clear, very publicly, how little she actually understood about Article 8 and relevant case law (again, annoying facts rearing their ugly head) during the Catgate controversy.  The reality is that it’s incredibly hard to win a case on Article 8 of the European Convention on Human Rights (the right to family and private life) alone, as anyone who has worked with the actual human beings these cases refer to will know.  Article 8, as Theresa May insists on telling us on a regular basis and which is reported as if the Home Secretary herself came up with this idea, is a qualified right.  A balance is struck between the right of a state to operate immigration control and to protect ‘public safety’; and the human rights of the person facing deportation to a family/private life.  The July 2012 changes to the immigration rules did attempt to tip the balance in favour of deportation, but the right to a family and private life is enshrined in European and UK law and the courts cannot ignore the UK’s human rights obligations.  The fact that Article 8 is a qualified right does not detract from the fact that it is a universal right also.  Although May would have us think otherwise, foreign ex-offenders are human beings who have human rights.   Foreign ex-offenders actually have a lower reoffending rate than British offenders, but this is unhelpful to May’s depiction of ‘foreign thugs’ roaming the streets.   For those of us supporting the rights of migrants to stay in the UK, some of whom happen to have criminal sentences, the image of liberal judges continually making decisions to allow foreign ex-offenders to stay is one hard to recognise.   We are a long way from the ‘judges’ revolt’ the Mail on Sunday warns of.  But with increasing incursions on the independence of the judiciary and attempts to politically influence the decisions of the court by Theresa May and her right-wing press lackies (remember the Telegraph’s naming and shaming of ‘lenient judges’?) maybe it’s about time for a judges’ revolt.

So much does the right to family life appear to upset May, she seems intent on destroying the very concept.  The family migration rule changes that imposed a £18,600 minimum yearly salary for those wishing to live with their foreign spouses in the UK were a clear signal of how much the government hates poor people, and how poor foreigners were the worst subcategory imaginable.  This policy is keeping children away from their parents, and separating couples who were foolish enough to think that love was what mattered.  Because the Home Office doesn’t believe in love.  As they proved with the great pleasure they took in launching an assault on love this Valentine’s Day.

A few days earlier, a BBC Freedom of Information request had revealed an increase in wedding day arrests.  Smarting at the finding that Certificates of Approval (when migrants had to ask the Home Office’s permission to marry) were unlawful, UKBA has decided to target registrars instead.  Registrars have been passing information to UKBA about what they view as suspicious weddings between a British national and a non-British national, and UKBA enforcement officers are increasingly swooping in on the day of the wedding and detaining people, sometimes with the other partner unaware of what has happened and why their partner is not there. 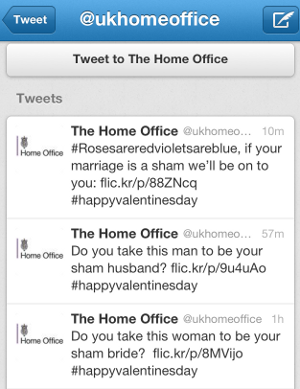 The Home Office decided to celebrate this ruining of people’s lives by posting sickening, flippant attempts at witticisms on Twitter with the hashtag #HappyValentinesDay.  The Home Office’s Twitter profile says ‘The Home Office is the UK government’s department for policing, crime, counter-terrorism and immigration.’  Pretty serious issues, then.  You’d probably expect some pretty serious tweets.  Some of them are.  Like the millions of people across the globe who took the opportunity of Valentine’s Day to “Strike.  Dance. Rise” in the One Billion Rising events, the Home Office felt that this special day was a time to call for an end to violence against women and girls.

It then decided that this special day was also a time to combine archived photos of distressed migrants being dragged away on their wedding day, accompanied by messages such as “Do you take this woman to be your sham bride? #HappyValentinesDay” and “#rosesareredvioletsareblue if your marriage is sham we’ll be on to you”.  There are so many objectionable aspects to this social media experiment that it’s hard to know where to start.

That the concept of a ‘sham marriage’ is entirely subjective, but a concept that is only used in reference to migrants?  Perhaps with the fact that the photos are several years old, suggesting some time and thought has gone into this despicable exercise?  Or that the woman being dragged away, crying, handcuffed in one of the images is clearly identifiable?  Or the glorying in other people’s misery (experienced before with the Home Office on Twitter, during the Operation Mayapple outrage).  Perhaps the most disgusting element of the whole affair was the jokey tone of the messages, revealing an almost unbearable cynicism and disrespect for people’s lives.

An American friend commented that if this had happened in the United States, there would be a media outcry and people would lose their jobs.  Here, apart from a storm of angry responses within the refugee/migration sector, it passed unnoticed.  The storm was important, however.   When you encounter, day in day out, UKBA’s unique combination of malevolence, inhumanity, and ineptitude you think you can’t be shocked any more.  But the Valentine’s Day affair was shocking, and more people should be shocked and angry.

The Secretary of State is peddling misinformation and obfuscating propaganda.   Her department are utilising social media to parade their hatred of migrants.  They are attempting to assert their legitimacy by appealing to the very worst aspects of humanity,  delighting in the pain of others, and encouraging hysteria about ‘foreign criminals’.    They are taking the purest, most precious aspects of humanity – human rights and freedom, families and love – and sullying them with their inhuman bitterness.