People engaged in a performance protest raising awareness about detention at HOME, with the help of Virtual Migrants. It highlighted the injustice of immigration detention and was a tribute to the 120 women on hunger strike during March this year.

Awesome to be here at @Right_to_Remain ‘s these walls must fall event. So important to create a culture of welcome for people seeking safety in the uk. pic.twitter.com/aRMsCD7UGT 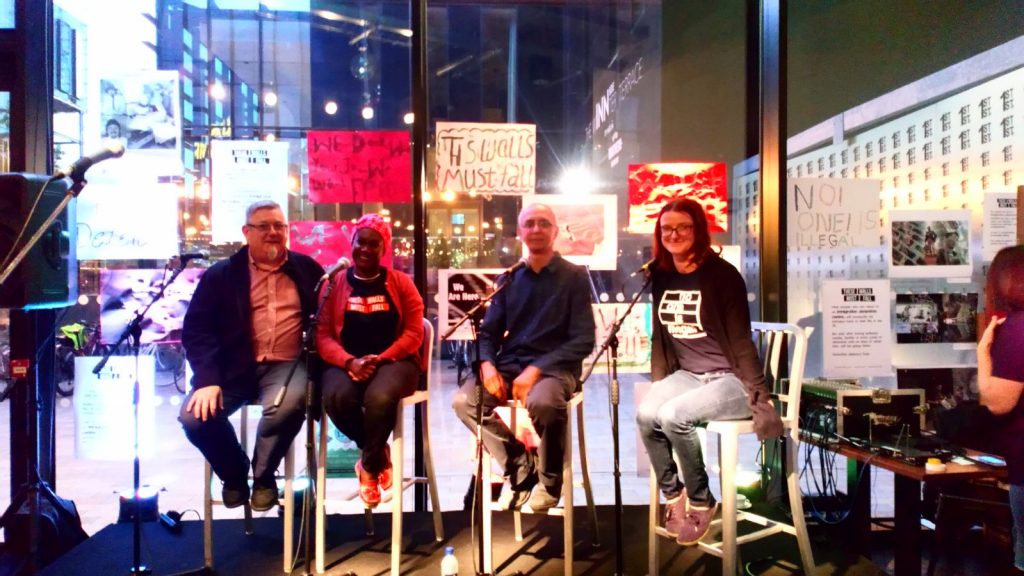 Tony noted that most significant change he has seen is citizens becoming immigration officers without too much public dissent – librarians, teachers, landlords, NHS staff. The panel gave credit to Ai Weiwei film Human Flow for engaging with the issues and the stunning scenes, but noted there was too little of the people speaking for themselves and few solutions or political comment. Lauren spoke of the fact that many in the UK wish to speak out but fear retaliation from the Home Office,  and noted the bravery of Miriam and others who do. Lauren also noted that the centre ground is shifting in the debate on detention, and that a time limit on indefinite detention is now the moderate option when there are so many people calling for them to be shut down now. Kooj noted the work to be done in giving everyone a voice,  and that “as artists we have to get out of our comfort zones to give these issues the extra push.”

Many thanks to everyone involved, and especially Virtual Migrants and HOME for supporting coordinating event! If you want to get involved with These Walls Must Fall, check out the website or follow on Facebook or Twitter.