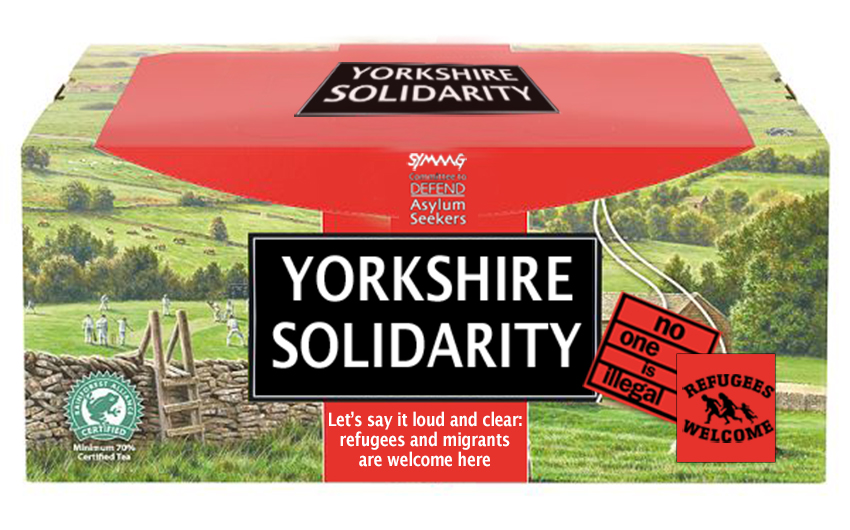 “Sheffield is a special place”.  Resounding nods accompanied my statement at our mutual aid and solidarity workshop in Sheffield on Tuesday.  Well, they were hardly going to disagree, being from Sheffield or fervent fans of their adopted city.  But it seemed to sum up the testimonies of the evening, with some of the asylum-seeking, refugee and other migrant attendees describing how they had upped and left other places in the UK – London, Kent, elsewhere – because they had been told how friendly Sheffield was.

Sheffield was the UK’s first ‘City of Sanctuary‘, and its tradition of mutual aid and solidarity to all those in need goes way back.  At the workshop, which we ran for Sheffield Campaign to Defend Asylum Seekers (CDAS), SYMAAG and others, we explained what we mean by the terms ‘mutual aid’ and ‘self-help’ which we believe are fundamental to taking effective action for the right to remain, and the movement for justice in the asylum/immigration system more broadly.

These phrases come from an old tradition, hundreds of years old, to describe people, communities, coming together to help each other. That could be help with money, with work, with housing, with healthcare, and so on.   It’s a political and social tradition that was, and in some ways still is, very strong in the north of England, where working people get together, get organised, to help each other through the hardships of life. You could say, though, that it’s just a normal part of human nature, to come together as a community, to help each other, for the benefit of the community.

But what do we mean by self help and mutual aid in relation to establishing the right to remain?

Self-help might sound like doing it on your own, helping yourself. And if you google ‘self-help’ and come across the thousands of ‘self-help’ books available, you may think it can only mean taking an individualist approach.  In it way, it does mean helping yourself, instead of leaving it someone else, like a lawyer. But it doesn’t mean doing it on your own. We mean the opposite.

And mutual aid, what does that mean? Mutual, of course, means sharing, doing things together. We share the work, we share the results, the benefits. We help each other. And by giving help to benefit someone else, it can also benefit you.

When we discussed this in Sheffield, some of the group rightly brought up the issue of trust, and how the divisive asylum and immigration system makes it very hard for people to trust each other, share information, and work together for the right to remain.  We agree.  It’s not easy, and we described how similar obstacles were faced in other social justice movements, such as by housing campaigners Focus E15.  Focus E15 are a group of young mothers in London (and their supporters) who were served with eviction notices and told that if they wanted rehousing, they would have to move outside London.  Initially, these mums were not campaigners.  In their hostel, they’d been warned not to talk to others, not to trust others.  It was only when they began talking to each other that they realised they were all facing the same crisis, and that together they could fight it. 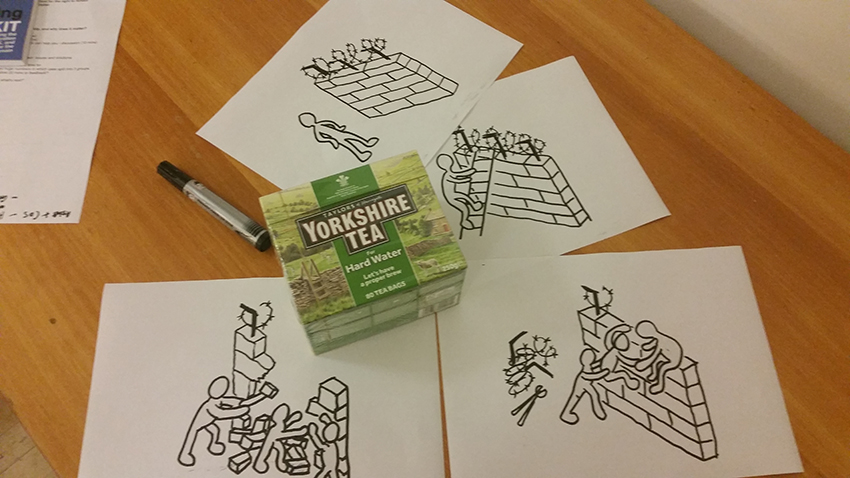 Image: our gift on arrival in Sheffield (to cope with London’s hard water), in thanks for the solidarity picture above!

We started the workshop with an exercise looking at the barriers that stop people being able to establish the right to remain – the way that the system can knock you down.

“It can be like climbing a mountain every day” said one group member.

Throughout the session, people who had been through the process or were still currently seeking the right to remain referred back to our display of barriers, and the things that can help you overcome them.

And as we proceeded through the next exercise, looking at case studies of problems people might face while navigating the system, and coming up with practical mutual aid and self-help solutions to them, the group shared example after example of ways in which they had supported each other through similar problems.  For every newly cruel way the Home Office found to treat people, the group tried to come up with creative, personalised advocacy to make that situation a bit better.

Accompanying people when they have to go and report (sign) at the Home Office.  Visiting their members if they are detained far away, at Morton Hall, or Yarl’s Wood, or the soon-to-be closed Dover detention centre.  Getting in touch with contacts in other cities who can provide information that is useful to a legal case.  Going through complicated refusal letters.  Going along with people when they have their appeal hearings.  This really was our toolkit in action.

We heard, and agreed, with the importance of not waiting till everything has gone wrong before telling someone you need some support.  We heard about the journeys people had made from isolated, solitary figures to strong members of a group, knowing they had people to turn to for help.  “They’re my friends, they’re my family, they’re my everything”  said one member about the group.  A few people attended the group for the very first time that night, and described how, up till then, they hadn’t known where to turn and had felt very alone.

People were passionate about working together for the right to remain, our core purpose.   But they also wanted to discuss, like us, how groups can work together to try and change this system that is so harmful.

“They just keep tightening, tightening … how do we make them stop?”

It’s easy to feel overwhelmed, as an individual seeking the right to remain, as an activist witnessing terrible things happening to your friends and the system getting more and more hostile, as a group with limited time, no money and lots of people in need of support.  At times like this, we’re working harder than ever to spread solidarity and strength among and across groups like the one in Sheffield, groups that are the movement’s life-blood.

Thanks to @Right_to_Remain for your gentle strength at Sheffield workshop tonight. You leave a trail of heartened people. Come back soon!