What happens after removal? Such is the question that many people involved in campaigns for the right to remain have asked themselves. How is it possible to keep alive what has been gained from a campaign even after the person seeking the right to remain has lost her case against the Home Office and has been removed?

The forced removal of someone you know can feel like a devastating blow.  While the legal case and campaign for the right to stay are fought to the fullest extent while the person is in the UK, some recent campaigns have showed us that the collective fight continues even after removal and that good things can be born from what looks like a failure.

Anne is Ugandan, she has relationships with women and she was forced to flee her village after an angry mob raided her house and attacked her friends, in an attempt to punish her for her sexuality.

As soon as she arrived in the U.K., Anne was detained at Yarls Wood and has effectively spent her entire time in the country in detention. Thanks to the support of visitors from Soas Detainee Support, during her time in detention, Anne has managed to make her voice heard and to gather a broad support group who sustained her in her fight for the right to remain. Anne and her supporters put together a public campaign, creating a blog, launching a twitter hashtag, contacting the media and promoting an e-petition. In this way Anne’s story managed to reach a wider audience while her group supported her emotionally and practically throughout her asylum application.

Unfortunately Anne was removed to Uganda on the 9th of April. We do not know what has happened to her since.

Why, in light of Anne’s removal, can this campaign still be considered positive? Looking at the SaveAnne campaign page it appears that the efforts of the people involved in the campaign have not been wasted: taking part in a campaign for the right to remain consists largely in learning how to provide support to individuals who are facing the asylum and immigration system, breaking their solitude and finding ways to connect across the barriers imposed by the U.K.’s legal system. Since Anne’s removal, the section of her website devoted to campaign actions has turned itself in a message of gratitude towards the many supporters of her campaign, rewarding their efforts and hopefully inspiring them to continue to take action against the Home Office. 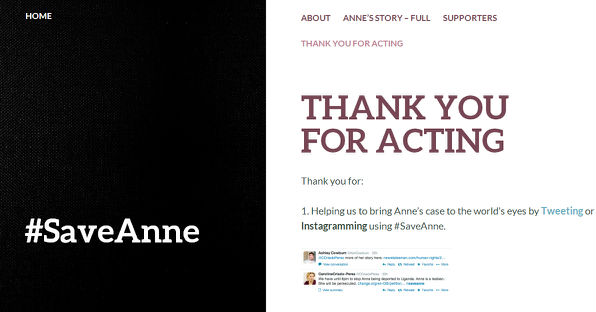 Another recent campaign for the right to remain that has gathered a great deal of attention was organized for the college student Yashika Bageerath. Despite thousands of people across the entire country mobilized demanding the right to remain for the young student, at the beginning of April, the Home Office forcibly removed Yashika to Mauritius, a place where she is in danger, and where her academic career would be irremediably compromised. 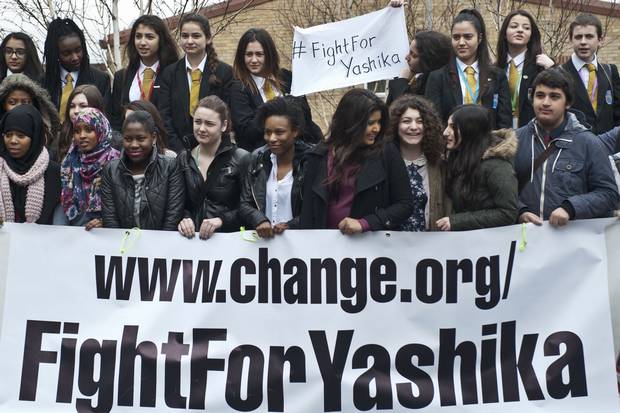 However, after her removal her school and her supporters have decided not to give up and launched a fund-raising campaign to pay for the cost of Yashika’s A levels and make sure she is able to sit her exams from there.

Steve Chalke, founder of the Oasis Trust, of which Yashika’s academy is a part has recently declared:

We are determined not to abandon Yashika, even though seriously hindered in our task by Home Office officialdom, woodenness, lack of commonsense and unpreparedness to make a compassionate decision.

The fight, thus, still goes on after her removal and the persistence of Yashika’s supporters has managed to shame the Home Office into facilitating the young pupil’s exams from abroad. 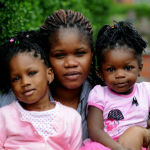 Afusat Saliu fled to the UK from Nigeria in 2011 while she was heavily pregnant after her stepmother threatened to subject her daughter Bassy to Female Genital Mutilation, of which Afusat herself is a survivor.   Afusat feared her two little would be mutilated and Afusat would be forced to marry against her will if they are forced to return to Nigeria.

Afusat was very involved with her local community in Leeds, and when she launched her campaign, she got a huge amount of support.  Over 120,000 people signed her online petition for the right to remain in the UK, and there was widespread media coverage of her case.

Following the announcement that Afusat and her daughters were due to be forcibly removed on a Virgin Atlantic flight, billionaire businessman and Virgin boss Sir Richard Branson was flooded with more than a thousand tweets urging him personally to step in to block the flight.  That removal attempt was halted, thanks to legal efforts and the massive airline campaign.  Afusat and her children were, nonetheless, forcibly removed last week.

Her campaign, and her legal case, continues however.  In an open letter to the Home Secretary Theresa May, printed in The Guardian newspaper, nearly thirty writers, actors, theatre directors and other artists demanded that Afusat’s case is reconsidered, especially in light of the ongoing judicial review of her case.

The Home Office claims not to forcibly remove people that are in danger of persecution in their home country.  This is patently untrue – they do not remove people whose protection claims have been recognised by an unjust and abusive asylum system.

Keeping in touch with people after their removal, when possible and when safe, is a good way to try and challenge the Home Office’s statement. In our  campaigning toolkit, you can read about preparing for and keeping in touch after the removal, and information about post-removal support.

Continuing the fight can mean different things, from filing an appeal to the Home Office decision from one’s country of origin, to maintaining international support networks, to contributing evidence from one person’s experience to someone else’s fight. The Home Office’s pretence that once someone has been removed, they are no longer their concern,  has been left unchallenged for too long. Let’s keep the fight going!

More information on what you can do after a removal from our toolkit here.