Every year around St Patricks Day, the Taoiseach (prime minister) of the Irish Republic travels to Washington to present the US president with a bowl of shamrocks to express the solidarity between the two nations. Over the past years, the Taoiseach also always raises the issue of the tens of thousands of undocumented Irish currently living in the US, who range (depending on who you ask) between 16,000 (the White House) and 50,000 (the Irish Embassy). 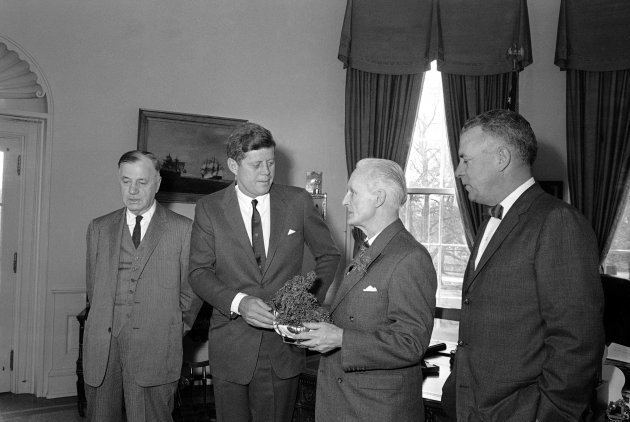 The history of Irish emigration to the US is centuries old, particularly in times when Ireland was most acutely suffering the effects of British colonisation. During the mass forced starvation in the 1850s – where two million people died – another two million people (¼ of the population) emigrated, many to the US. The history of the Irish in the US is complicated; they suffered from prejudice and poverty, yet as a group were able to ‘become’ white – with all the benefits that bring. Today 11% of the US claim Irish descent (including many anti-migrant extremists including Vice President Pence, Paul Ryan, Kellyanne Conway and Steve Bannon).

Today, in addition to the millions of American’s with Irish roots, many thousands of Irish nationals live in the US – many with papers, and some without. While they are from a relatively privileged nation in terms of access to holiday, work or study permits, many end up overstaying their visas. Once this happens there are few if any legal routes to regularising your immigration status. Others move there with their families as children, and as with undocumented people around the world, do not realise that they don’t have legal status until they interact with the state as they get older – perhaps by applying for a college loan, or getting in trouble with the police. 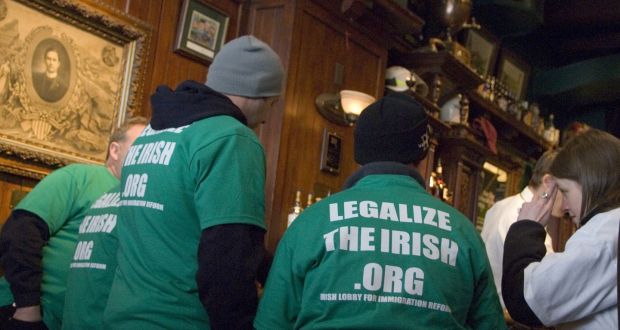 Dylan O’Riordan is a 19-year-old originally from Galway, who moved to the US at the age of 12 with his parents, and overstayed his visa. He was arrested by the police after a fight with his partner, and while the charges were dropped he was handed over to the immigration authorities. Dylan, along with the third of all undocumented folk who overstayed a visa, automatically ‘waived’ their rights to an immigration hearing to challenge his deportation. He was detained for a month, before being deported back to Dublin, with a ten-year ban on re-entry to the US.

The Irish undocumented only make up a tiny amount of those living without status in the US (last year 34 undocumented Irish were deported, compared to the 128,765 Mexicans ejected from the country last year). Most – 9 out of 10 – undocumented people in the US are from Mexico, Central America or Haiti, and deportations have constant threat. For the rest, deportations have jumped 24% last year. Tactics that are being ramped up under the Trump regime – such as the targeting of undocumented community activists – are now also being used against the Irish. John Cunningham had lived in Boston for two decades, after overstaying a 3-month work visa. He spoke out in an interview about the increasingly hostile climate, and was then targeted, detained and deported.

Cunningham acknowledged that his white skin and accent granted him and many other Irish the ability to ‘fly under the radar’, and “recalled local police and immigration officials not questioning his status during stops.” Shauna, another undocumented Irish immigrant, told CNN that “It is easier being illegal here when you’re white. It’s not easy, of course, you have that paranoia but there isn’t the racial element. It’s a bit easier to stay under the radar.” Yet while being spared from racial profiling and street harassment, many expressed a fear of accessing public services – like reporting crimes to police or accessing an emergency room. This strongly echoes the ‘chilling effect’ of Britain’s ‘hostile environment’ immigration policies, which has seen an undocumented woman arrested after reporting a rape and people dying rather than going to hospital. 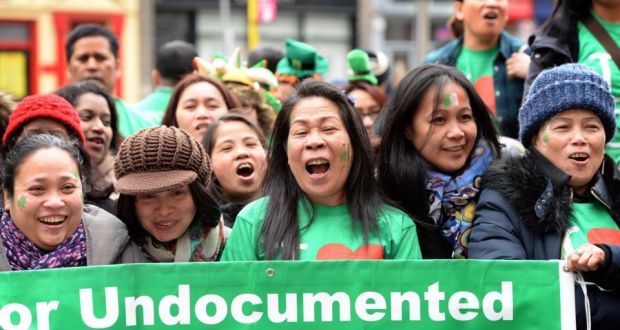 The undocumented in Ireland

While our leaders go to the White House, the thousands of undocumented in Ireland raise their voice to call out the hypocrisy and call for justice. Approximately 26,000 adults and children work, study, live, and love in Ireland without papers. Again, many are undocumented for the same reasons as their counterparts in the US – the lack of legal avenues and/or financial means to extend their visa or regularise their status. Yet the undocumented in Ireland find themselves in a similar – and often worse – situation as the undocumented Irish in the US. Schemes like DACA, with all their limitations, do not even exist in Ireland. While anyone born in the US is granted citizenship, this was changed in Ireland after a highly xenophobic referendum campaign in 2004. In addition, they ‘fly under the radar’ as the Irish can in the US.

The Justice for the Undocumented, a group with 14000 undocumented members, in addition to supporters and allies, takes the opportunity to raise the issue each St Patricks Day. Together with the Migrant Rights Centre Ireland they put the spotlight on the individuals who make up the 26,000 figure.

“I'm in Ireland for 15 years. This St Patrick’s Day I want the Irish government to know I live here, work here and belong here. And we that we need a regularisation.” – Jo (originally from Malaysia, now a Dubliner)

Justice for the Undocumented often express their solidarity with all the undocumented in the US, as well as the 5000 souls trapped in the country’s ‘Direct Provision’ asylum system. That sad truth is that while the Irish government advocate for the Irish in the US,  at the same time presiding over our notorious asylum system, introducing new hostile immigration legislation, and that is building our first purpose-built immigration detention centre is not lost on anyone.

Someone in St Patrick’s situation today – undocumented, trafficked from another country into six years of forced labour in Ireland – would face hostility from the immigration regimes north and south of Ireland.

So, what could a future St Patrick’s Day in line with migration justice look like? To start, an Irish government who listens and meets the demands of the undocumented in Ireland, and ensures justice for them and all others who suffer under the county’s immigration regime

To end the racism in how politicians and the media in the south of Ireland talk about the Irish in America (‘undocumented’) compare with those without papers living in Ireland (‘illegals’). Going further, to call out the US for their decades-old oppressive immigration regime, and advocate for the rights of ALL undocumented in the US.