This article was written by Yasmin Gunaratnam for the Mapping Immigration Controversy project. 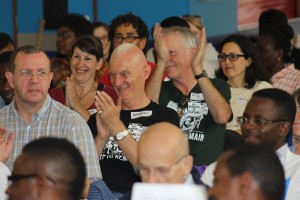 Over a hundred people filled the small community hall that hosted the Right to Remain (RtR) conference in Bethnal Green on the 6th September. Bristol, Cardiff, Glasgow, Liverpool, Newcastle and Slough were some of the areas that I managed to note down at the opening of the event, as people called out with their affiliations to warm applause. Our welcome from the organisers was accompanied by a forewarning “We’re going to hear how horrible things are”.  And we did, not least the news of the death of Rubel Ahmed in Morton Hall detention centre, which was announced towards the end of the day.

It’s an especially difficult time for migrants and those working on migrant rights campaigns these days. The interviews that we have been carrying out over the past few months, as a part of the Mapping Immigration Controversies project, have been showing the unfolding effects of creeping anti-migrant rhetoric and policy initiatives. The ‘hostile environment’ for undocumented migrants that Theresa May announced as a part of the Immigration Act has become palpable, extending from increasingly inhumane care in detention centres to the proliferating of border controls. Migrants who are here legally have been telling us that they are feeling undermined and insecure. Other British citizens have been turning for reassurance to political parties such as the UKIP and the BNP, because in their minds it seems that migrants are at the root of all social problems, from housing, to social unrest, to access to GPs and crime. “They have got it made, these illegal immigrants”, a UKIP voter told me in a focus group in East London a few weeks ago. “They have got us over a barrel and we let them do it”.

Under the theme of ‘Solidarity in a hostile environment’, the idea behind the RtR conference was to help and inspire migrants rights campaigners, by sharing case study examples, tactics and experiences. The conference began with presentations from Frances Webber, a former immigration and human rights barrister; Saira Grant, Legal and Policy Director at the Joint Council for the Welfare of Immigrants, and Rita Chadha, Chief Executive of Ramfel (Refugee and Migrant Forum of Essex and London).

Frances Webber drew attention to the huge contemporary erosion of rights for migrants, characterised as she saw it, by a culture of ‘depraved indifference’, a term that comes from US criminal law. Mean spiritedness combined with self-righteousness was what was emerging, a version of British values that Frances urged the conference to resist. “Let’s reject British values. What I’d like to see is human values”.

Saira Grant’s focus was the Immigration Act, which spans six Whitehall departments, covering legal practice, bail rights, increased immigration enforcement powers and access to public services. According to the Home Office, the Act “is focused on stopping illegal migrants using public services to which they are not entitled, reducing the pull factors which encourage people to come to the UK for the wrong reasons, and making it easier for the Home Office to remove people who should not be here”. The right to appeal against immigration decisions has been severely curtailed and Saira spoke about the piloting of the new landlords scheme that will begin in the West Midlands in December. The scheme will mean that landlords have the right to check the immigration status of potential tenants and could face a fine of up to £3k if they rent to undocumented migrants.

Given this harsh climate, how should organisations and campaigners work with the Home Office, if at all? This was the question that Rita Chadha tackled. Using examples from Ramfel’s recent monitoring of Operation Centurion, Rita described how the Home Office had tried to engage with Ramfel in the implementation of Operation Skybreaker. Rita suggested that we should get involved in Neighbourhood Partnerships. Perhaps, most surprising of all, was the advice “befriend your local police officers”. In Rita’s experience, the police can be relatively supportive to migrant rights organisations. In Barking and Dagenham, local police had agreed to training in signposting migrants to support services. 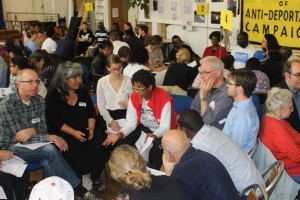 After a delicious lunch of rice and vegetables, there were two group work sessions in which we were organized into six small groups, whose membership changed with each session. The groups were facilitated to help us share ideas and positive outcomes from our respective work. In each group we read and discussed an allotted case study from a small booklet of practical examples compiled by RtR. My group discussed the Noela Claye campaign, coordinated by Women Against Rape (London). During the discussion a mother told us about her how she had supported her son while he was held in an immigration detention centre and someone from Glasgow’s Unity Centre described their practice of ‘signing support’ where members who have to report to the Home Office check in with Unity first, in case they are detained. Some people in the group wondered aloud about whether a campaign might have detrimental effects for a case. Frances Webber believed the opposite and stressed the importance of “bringing the community into the court room.”

It was in the intimacy of the lively discussions in these small groups that it was possible to see some of the larger workings of how the normalization of everyday injustices is turned into a visible political issue/controversy. This happens as people gather around a human plight and set up of transnational, transcultural and trans-urban communication networks and infrastructures through which ideas, outrage, care and resources can flow. These ways of mobilising dissent brought to mind the political theorist Vicki Squire’s concept of ‘mobile solidarities’, through which care, support and citizenship claims are thickened as they move between and across human and geographical networks. Mobile solidarities with those whose presence is insecure and endangered, can be spontaneous and fleeting, but they can also be nurtured and substantiated through on-going effort, dialogue, attentiveness and shared learning.

What struck me about the case studies that we were offered was that they included campaigns that had failed to achieve a successful outcome. For example, another case we were invited to discuss was that of Isabella Acevedo, who had worked as a cleaner for the former immigration minister Mark Harper. “It may be surprising to include an example when the person was forcibly removed from the UK” our case studies booklet stated, “but it’s important to remember that the fight does not necessarily end when someone is removed, and we must look at what has been learnt by the campaign and what has been left behind and may help others in the future”. 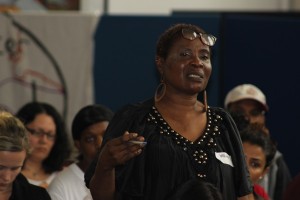 More often than not campaigning work is marked by frustration, forced compromises and failure and it was valuable to see these aspects of social and political life recognised. Such work – interpreting and articulating counter narratives, mediating discursive chasms, listening to marginal voices, tending to hurt and injury, tolerating uncertainty and not-knowing – seem vital in encouraging the improvisations that are necessary for sustaining our ‘mobile solidarities’. As the geographers Graham and Thrift (2007) have pointed out, despite its origins in failure and fault, in improvisation there is always hope:

Improvisation allows the work of maintenance and repair to go on when things may seem bleak and it takes a whole series of responses, from simple repetition (such as trying it again) through to attempts to improve communication so as to be clear exactly what the problem is, through disagreement over causes, through to complex theorizing, responses which are often the result of long and complex apprenticeships and other means of teaching… (p.4).