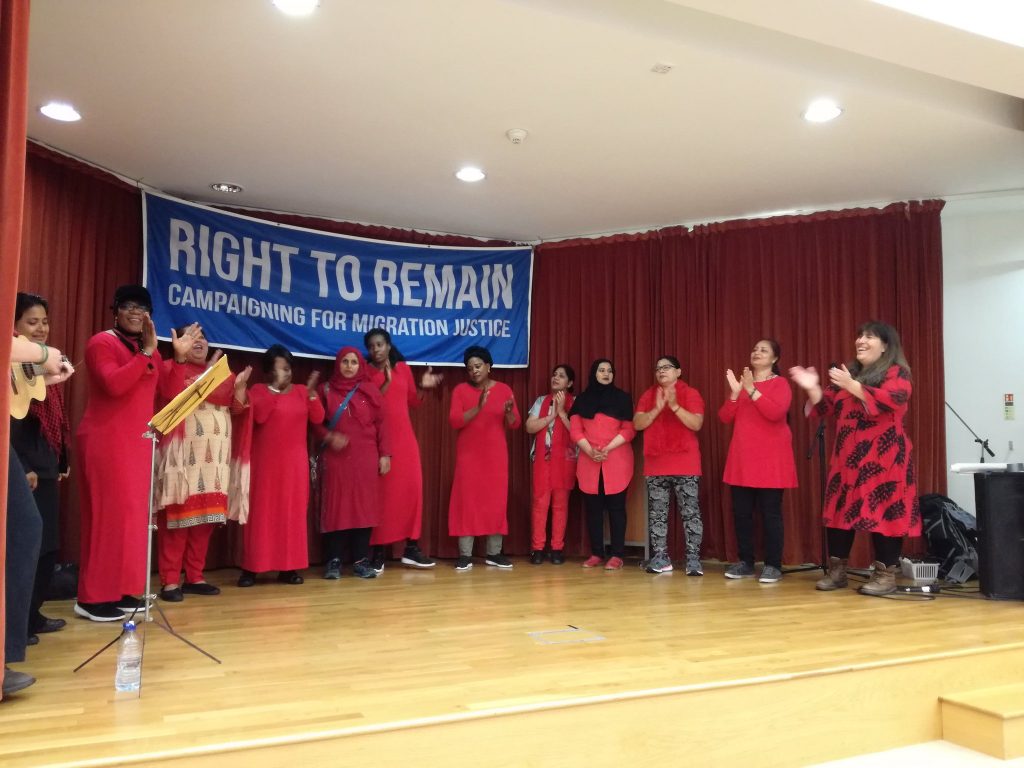 On 10 September, Right to Remain held its annual gathering in Liverpool.  We were joined by groups and individuals from across the UK, to share information, learning, inspiration and hopes and fears for the year ahead.

This year, groups from Glasgow, Manchester, Newcastle and Gateshead, Sunderland, Hartlepool, London, Bristol, Nottingham, Coventry, Brighton, Sheffield and more came together and created an amazing day of the meeting of minds and hearts.  It was fantastic to see so many people wanting to talk to Early Asylum Support Sheffield about what they’re doing on helping people to prepare ahead of the asylum interview – a very new group we’ve been supporting this year.   We were delighted that several members of the Bristol Signing Support group were able to travel so far to share their experiences to others interested in this method of practical solidarity.  And the moment when a Coventry group and a Manchester group met for the first time and agreed they wanted to work together on a shared aim of their members encapsulated exactly what we want the annual gathering to be about.

Ready for @Right_to_Remain Annual Gathering! It's going to be great! pic.twitter.com/3Cxhjel2Gs

The day was launched with an outstanding performance by the MaMa choir, a group of migrant women singing powerful, moving, stirring songs about solidarity, justice, struggle, peace and sisterhood. The performance, and the choir, are about building something strong and beautiful in the face of oppression and injustice, a perfect theme for the day.

The MaMa Choir opening the #RtRgathers in Liverpool. Beautiful voices & great way to kick off the day pic.twitter.com/B97FZyT21R

Incredible to see powerful women from around the world perform with a narrative of struggle,solidarity, heritage of our sisters #RtRgathers https://t.co/j6Luy7Hm1P

We then shared a quick review of Right to Remain’s year and the world in which we are working for migration justice, and participants joined in to discuss highlights of the year since the last annual gathering, and challenges that lie ahead.

@LisaMatthewsRtR updating the #RtRgathers on the @Right_to_Remain off the last year, including great work including #TheseWallsMustFall

@rock4_ronnie representing Manchester #MigrantSolidarity. 'We can effect change & if I can do it, we can do it'. #RtRgathers

After a lively session of speed networking and lunch, we split into break-out sessions repeated twice with a different audience – a tough task so we’d like to sincerely thank all the brilliant facilitators!  Asylum Matters ran a session on campaigning for change; Help Refugees spoke about the refugee situation in Europe and the need to challenge humanitarian policy in the courts; the Unity Centre’s session was on campaigning against charter flight mass removals/deportations; and Freed Voices’ session was entitled: Everything You Wanted To Know About Detention But Were Too Afraid To Ask.  We also held a small discussion group on those who have experience of or want to get involved in signing support.  We had great feedback about the sessions, which gave people a chance to learn, to share and to meet the other people at the event.

Help Refugees were at the @Right_to_Remain AGM today, talking about need to challenge gov policies through the courts. #TheseWallsMustFall pic.twitter.com/jIyTyAxEeB

No human is illegal! Seeking refuge is a Human Right ! pic.twitter.com/eotwLv0Gap

The final session of the day was on These Walls Must Fall – building local campaigns against immigration detention.  We asked the audience to answer several key questions on detention: how many people are detained; who can be detained; where are people detained; how does detention happen and how long are people detained for (answers to all these can be found on the These Walls Must Fall website).  Almost everyone in the room shouted an answer to ‘how long can someone be detained?’ – the answer is indefinitely.  But there was a great alternative answer given to this as well: “Until all the detention centres are closed!”.

After a long day of talking, listening and learning we were really impressed with the great variety of suggestions from participants on local actions to challenge detention.  We were particularly struck by the suggested action of building caring communities – something that we felt was brilliantly represented by the people who attended the event. We’ll be writing about this more and sharing these suggestions very soon!

Finally, the day was brought to a close by Right to Remain committee member Tienga Ngale, who thanked everyone for travelling so far and being part of such a fantastic day.  After a public thank you to outstanding committee member Bill MacKeith, who is retiring after many years of hard work and support for Right to Remain, he bid us all to leave the event taking the energy of the day with us, to keep us going for the fight ahead.

Very pleased to have attended the Right to Remain annual gathering today in Liverpool. It was a valuable experience for us all. #RtRgathers

2 comments on “Our 2017 annual gathering: caring communities and beautiful futures”